Did you know that in 1946 two men, Percy Spencer and an associate, P.R. Hanson, were working on a project that they dubbed "the Speedy Weenie?" The "Speedy Weenie" was the nickname they had for their secret project, the microwave oven! It literally meant "a quick hot dog!"

In 1947 a commercial oven that heated food using microwave energy was first used in a Boston restaurant. The original microwaves were 5 1/2 feet tall, 750 pounds and cost over $5,000! They weren't the most popular appliance on the market.

During the 50's there were many refinements and the microwave gained in popularity but was known as the "radarange!" It was only $2,000 to $3,000.

Finally, in 1975 the microwave oven became the most popular appliance with sales exceeding the gas range! By 1976, 60% of the homes in America owned a microwave oven.

My home was not one of the 60%. The Kitchen Gnome kept telling me that we could use it to heat coffee. Heat coffee?! I could see no reason to spend a great deal of money on an appliance that could heat coffee and cook a hot dog quickly!

In 1978 I became the proud owner of a new stove and oven with, you guessed it, a microwave unit above the stove! I was going to learn all about the magic of the microwave, or so they told me. So what does this have to do with German Potato Salad? Well, the first successful dish that I prepared totally in the microwave oven was German Potato Salad. It came right out of the New Magic of Microwave Cookbook by Magic Chef. 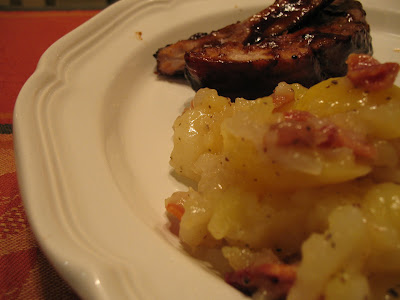 Place bacon in 1 1/2 quart casserole. MICROWAVE 3 to 4 MINUTES on HIGH, or until crisp. Remove bacon. Crumble and set aside. 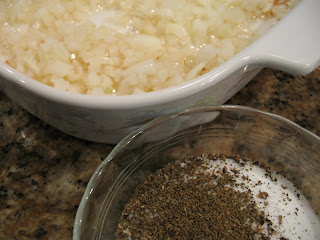 Add onion to bacon drippings. MICROWAVE 2 to 3 MINUTES on HIGH, or until onion is transparent.

Stir in flour, sugar, salt, pepper, and celery seed. MICROWAVE 1 MINUTE on HIGH. Stir in water and vinegar. MICROWAVE 3 to 4 MINUTES on HIGH, or until mixture boils. Add potatoes and bacon, stirring gently to coat with sauce. 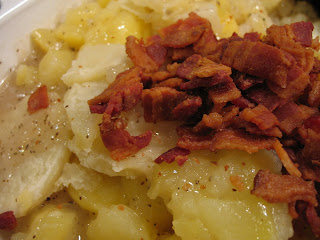 Don't you just love the way the recipe was printed. They were certainly emphasizing that it was to be done in the MICROWAVE, the number of MINUTES and on HIGH! The whole cookbook is printed in this manner. 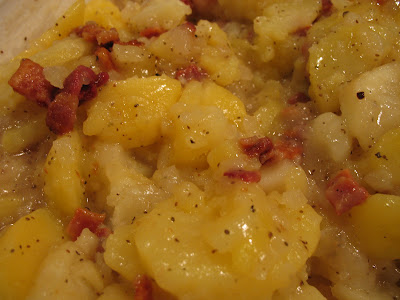 My dad was never generous with compliments but this is one dish that he raved about and always requested when he and mom were coming to dinner! If Dad liked it, it must be good!