Sometimes I think I am in a rut when I go into the kitchen.  Have you ever felt that way?  Some days nothing sounds good and the summer heat makes it hard to even think about eating.  I can be inspired though, and that is what happened when I saw a recent post by David Lebovitz for Moroccan Spiced Chicken Skewers.  There was no question what was going to be for dinner.

First, though, I had to make the spice mixture.  The mixture known as Ras el Hanout is common in the Moroccan spice cabinet.  Translated, Ras el Hanout means "head of the shop" and is a mixture of the very best spices that the shop has to offer.  It can be 20-40 spices put together by the shop owner. The blend of spices can include:  cumin, cardamom, cinnamon, turmeric, ginger, coriander to name a few.  The mixture will vary from shop to shop as each owner selects his very best and creates his own unique Ras el Hanout.

The mixture can be very complex or simple. Since I am the owner of this shop, it was a simple mixture of great flavors!  I followed David's link to a recipe from Epicurious and that is what I used. 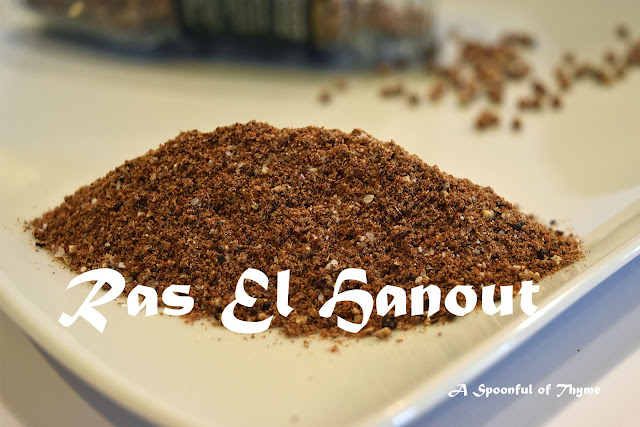 Combine all of the spices together in a small bowl.  The spice blend may be kept in an airtight container for one month.

This aromatic spice blend is a familiar mix in Moroccan cuisine. It can readily be used as a rub, in a marinade or as a seasoning in tagines or stews.

I chose to use it as part of a marinade for chicken skewers....it will be in an upcoming post!
Posted by Kathy Walker at 2:55 PM 2 comments:

It looks as though there is going to be another  early heat wave.  Temps reaching 111° F.  sound oppressive, but, they aren't as bad as what the folks in Arizona are experiencing.  So, I share not complain.  Instead, I am going to share a nice, refreshing drink! 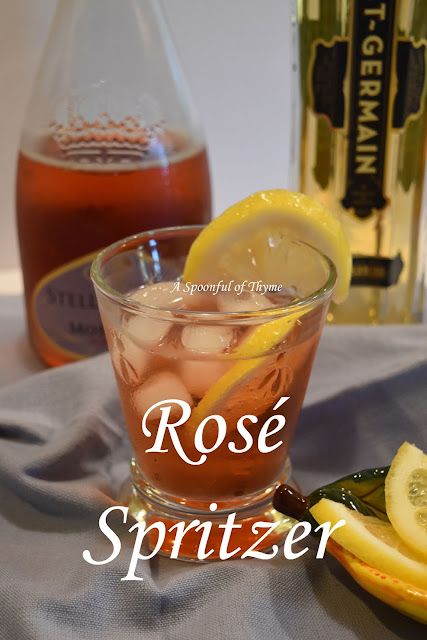 When I first saw this recipe from Bon Appétit, I was sold.  The only thing I disagree with is their lead in...."...the kind of thing that you can drink all afternoon."  While drinking all afternoon may have appealed to me forty years ago, today, I am happy to enjoy this refreshing drink in the evening, while sitting on a the patio and watching the dogs check out the yard for any critters that may be visiting!

Of course, if we had a pool, I might just enjoy a glass or two while dangling my feet in the water!

In a rocks glass (short tumbler), place the lemon slices, bitters, and St. Germain.  Add ice and then top off with the sparkling rosé.

That's it.  Pretty refreshing and quite tasty! 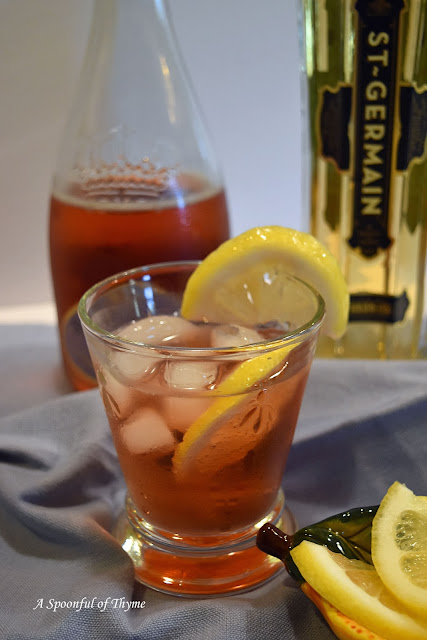 This has become my fun drink in the evening.  It really is refreshing...but I think it could be too easy to drink!

I am sharing to day at Full Plate Thursday hosted by Miz Helen's Country Cottage.

Are you a cheesecake lover?  Do you like ice cream?  How do you feel about chocolate in the form of a brownie?  If I told you that you could have all three rolled into one, what would you think?  Would you keep reading?  That's what I did when I saw the recipe for Brownie Cheesecake Ice Cream on my assigned blog for the Secret Recipe Club.  And there is more...it's the name of my blog assignment....ready?  It's....Smells Like Brownies!  Isn't that cool?  Why wouldn't you want to go exploring when there may be brownies?

Melissa says that her food style is a bit quirky as she is a picky eater.  She loves veggies, fish and intensely loves chocolate.  That means that she has a very distinct focus:  vegetarian and fish dishes plus dessert!  She believes that variety is the spice of life so there are many variations to try that will lead new things to love!  Keep cooking, Melissa!  I had fun touring your blog.

I must admit that I did love the recipe I selected, Brownie Cheesecake Ice Cream!  But, I was still trying to recover from baking and eating cookies with my granddaughter so I was being pulled toward either the Gruyère and Asparagus Tart or the Niçoise Salad with Seared Tuna, not wanting to indulge.  But....our weather got really, really hot....unreasonably hot for this time of year so....ice cream wins!!

One of the biggest appeals was that I didn't have to mess with eggs and making a custard base!  Easy mixture to put together but it does have to be made in advance.  It is not a last minute dessert. 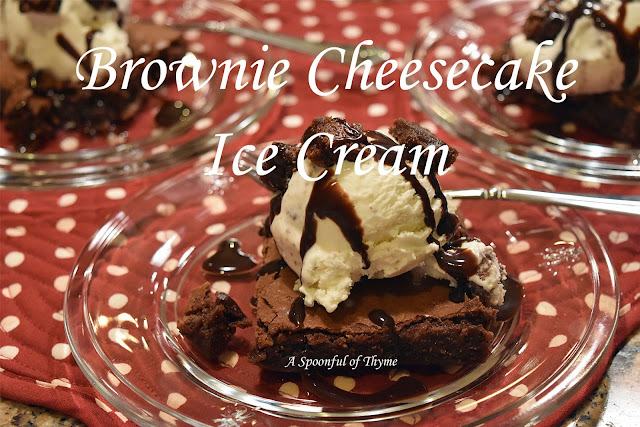 In a mixer bowl, beat the cream cheese and sugar together until soft and smooth.  In a measuring cup stir together the sour cream, heavy cream and vanilla.  Add the mixture to the cream cheese in two batches, beat well after each, until combined.  Scrape the edges of the bowl and beat for 1 minute more.  The batter should be thick and smooth.

Chill the cheesecake batter for 1 hour in the refrigerator.

After the hour, churn the mixture in your ice cream maker per the manufacturer's directions.

Add the brownie cubes per the manufacturer's directions for add-ins.

Transfer the ice cream to a plastic container with a lid, such as a cambro.

Freeze at least 3 hours before serving.

NOTES:  My ice cream maker didn't like the brownie cubes.  I found it easier to mix them into the ice cream prior to transferring them to the plastic container.

This is a two fer one post!  The Baker's One-Bowl Brownies are a must to accompany the wonderful Brownie Cheesecake Ice Cream.  Serving the ice cream on top of a brownie square is a must and this simple brownie recipe is perfect.


Baker's One-Bowl Brownies
adapted from Kraft and Smells Like Brownies

In a large microwave-safe bowl, break the chocolate into small pieces and cube the butter.  Microwave on high for 2 minutes or until the butter is completely melted.  Stir to combine.

Stir in the sugar.  Beat in the eggs and vanilla until well combined.

Stir in the flour and salt.  Do not over-beat the batter or the brownies will become tough and chewy.

Transfer the batter to the prepared pan.  Spread the batter evenly and smoothing the top with a spatula.

Remove the pan from the oven and allow to cool for 5 minutes.  Lift the sling out of the pan and continue cooling the brownies on the counter.  When completely cool, cut the brownies into squares. Serve with a scoop of ice cream and drizzled with chocolate sauce. 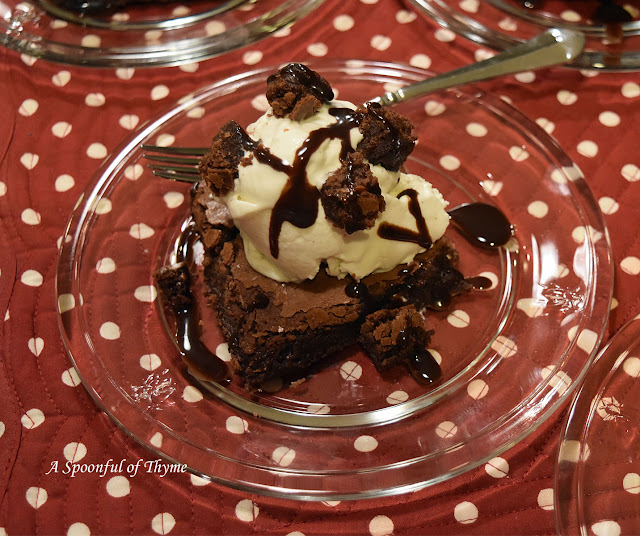 I topped a brownie square with this tasty ice cream and then drizzled it with chocolate sauce.  It was so tasty and very refreshing on this hot, hot evening!  Let's face it, 107° F. is a bit much!

An InLinkz Link-up
Posted by Kathy Walker at 9:00 PM 10 comments: