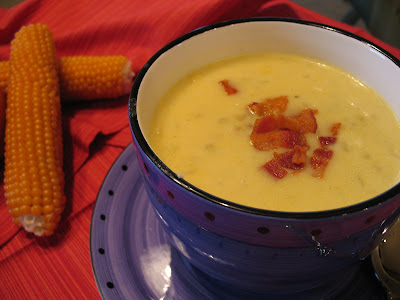 Today was Soup Day at work. During the fall and winter we make groups and take turns preparing soup for the department. Today was filled with a tasty lunch. We had beef stew, minestrone, cheddar corn chowder, salads, and brownies. The department has such fabulous cooks. It is great to work where everybody loves to cook and everybody loves to eat! 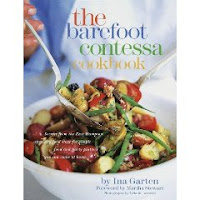 I made the cheddar corn chowder because it is the first recipe of the month for Barefoot Bloggers. Jill of My Next Life selected the recipe for us and I was so happy! I have paged through The Barefoot Contessa Cookbook on numerous occasions and I always stop at this recipe. Why I never made it, I don't know.....but, today I did!

I was not disappointed! This soup was delicious and received rave reviews from the team! 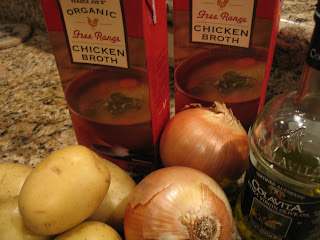 In a large stockpot over medium-high hear, cook the bacon and olive oil until the bacon is crisp, about 5 minutes. 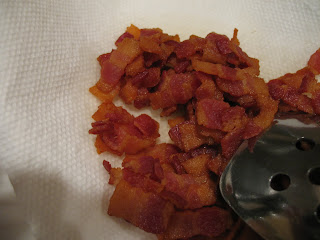 Remove the bacon with a slotted spoon and reserve. Reduce the heat to medium, add the onions and butter to the fat, and cook for 10 minutes, until the onions are translucent. 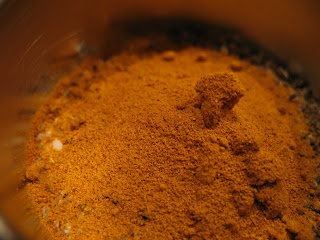 Stir in the flour, salt, pepper, and tumeric and cook for 3 minutes. Add the chicken stock and potatoes, bring to a boil, and simmer uncovered for 15 minutes, until the potatoes are tender. If using fresh corn, cut the kernels off the cob and blanch them for 3 minutes in boiling salted water. Drain. (If using frozen corn you can skip this step.) Add the corn to the soup, then add the half and half and cheddar. 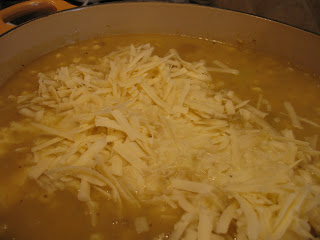 Cook for 5 more minutes, until the cheese is melted. Season, to taste, with salt and pepper. Serve hot with a garnish of bacon. 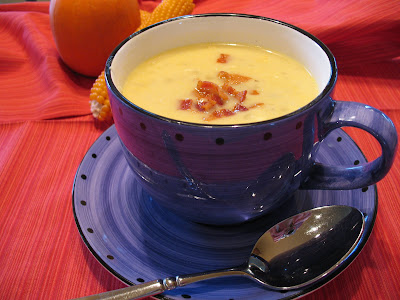 Ina Garten states that this was one of the most popular soups made in the store. I can see why this hearty soup was so popular! Try it, you won't be disappointed.
Labels: Barefoot Blogger Corn Soup