The Kitchen Gnome and I have belonged to a Gourmet Group since the girls were babies. My friend and I discovered that babies meant that we never got to go out anymore! No more dates. Instead, it was the grocery store and the doctor office! My friend and I decided that if we joined a gourmet group we were sure to go out at least once a month. So, here we are past the group's silver anniversary and still cooking and meeting regularly, well, almost regularly. Now there are grandchildren and travel for some lucky members.

And what does this have to do with pearls? Well, it was a Julia evening! The soup and the main course were from Julia's cookbooks. There were pearls that night also, but it was all about the wonderful food!

For an appetizer we had tasty meatballs from California Wine Lover's Cookbook by Malcolm Hebert: Wine Institute and Wine Appreciation Guild. They hit the spot with the lovely red wine that was served.

The broccoli soup was from Julia's cookbook, The Way to Cook. It was smooth and flavorful and perfect on a cool fall evening. 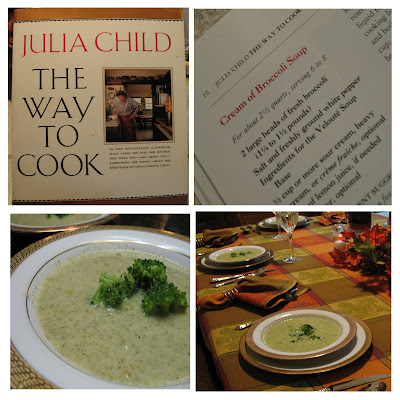 Our Seared Romaine Spears with Caesar Dressing salad was outstanding! It was in the June 2008 edition of Food and Wine. To use my oldest daughter's terminology...this goes on the rotation! It was so delicious I could have been content with salad and soup! 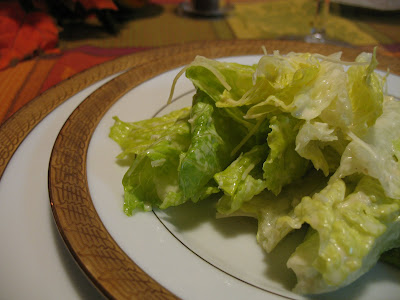 Seared Romaine Spears with Caesar Dressing
The main course was Coq Au Vin from Julia's cookbook, Mastering the Art of French Cooking. It was delicious. I know it took a long time to prepare and it was well worth the time and effort. 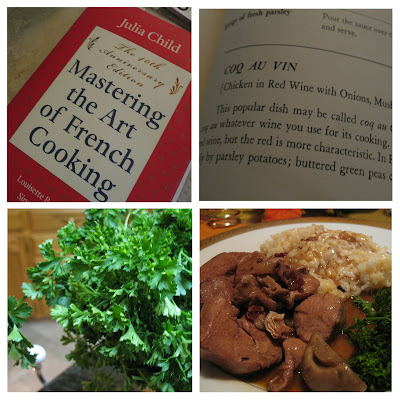 And now for dessert!

This time when the group met I had the pleasure of taking dessert! I prepared an Apple Cinnamon Cheesecake. And while it was cooling, the smell in the house was wonderful. It wasn't difficult, just time consuming.

There was one minor problem...since I started the cheesecake at noon and hadn't read anything but the list of ingredients prior to beginning to prepare the dish, I learned that it was supposed to be refrigerated overnight and then the topping was to be added! I had no choice but to dive in and hope it worked without letting it sit overnight!

No problem....this was wonderful even with skipping the overnight step! You do need lead time when making this recipe. I learned that one is really supposed to read everything before doing anything! The recipe came from the Taste of Home Magazine Fall Baking issue. 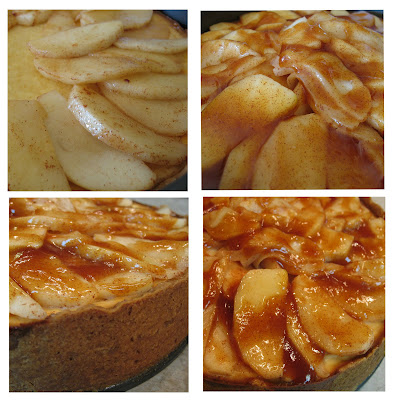 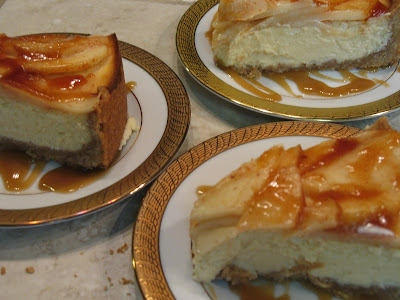 In a small bowl, cream butter and brown sugar until light and fluffy. Gradually add flour, oats, walnuts and cinnamon until well blended. Press into the bottom and 1 1/2 inches up the sides of a greased 9 inch springform pan.

Place on a baking sheet. Bake at 325 degrees for 10 minutes or until set. Cool on a wire rack.

In a large bowl, beat cream cheese until fluffy, beat in milk and juice concentrate until smooth, add eggs, beat on low speed just until combined (batter will be thin). Pour into crust.

Return pan to baking sheet. Bake at 325 degrees for 40-45 minutes or until center is almost set. Cool on a wire rack for 10 minutes. Carefully run a knife around edge of pan to loosen. Cool 1 hour longer. Refrigerate overnight.

In a large skillet, cook and stir apples in butter over medium heat until crisp tender, about 5 minutes. Cool to room temperature. Arrange over cheesecake.

In a small saucepan, combine the cornstarch, cinnamon and juice concentrate until smooth. Bring to a boil. Reduce heat, cook and stir for 1 minute or until thickened. Immediately brush over apples. Refrigerate for 1 hour or until chilled. Remove sides of pan. Garnish plates with Caramel Sauce.

In a small saucepan, combine the brown sugar and cornstarch. Stir in cream, water and corn syrup until smooth. Bring to boil, cook and stir for 2 minutes or until thickened. Remove from heat.

Stir in butter and vanilla until butter is melted. Drizzle caramel sauce on plate as a garnish when serving Apple Cinnamon Cheesecake. 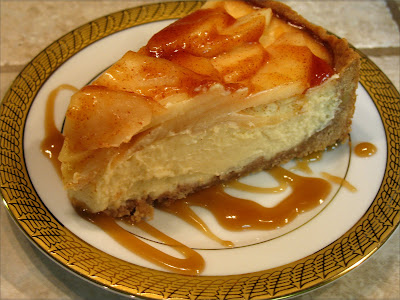 Ironically, I was to make and take cheesecake and I am not a cheesecake fan. It is the one dessert that I can pass up. This cheesecake, though, was delicious. I had seconds!

I am participating in Foodie Friday hosted at Designs by Gollum. Stop by and take a look at all of the fantastic dishes being prepared today.
Labels: apple broccoli dessert Salad Soup