As it was fast approaching the reveal day for The Secret Recipe Club, Mr. T and I both explored the blog that I had been assigned.  We were searching for the one recipe that we would make and then share on reveal day and we knew we wanted to try something authentic.  You see, we were assigned Josie's Kitchen and Josie, while currently residing in New York City, was raised in the Dominican Republic so why not try food from the region.  Ironically, we both tagged the same two recipes and at about the same time said,  "Let's make the shrimp!" 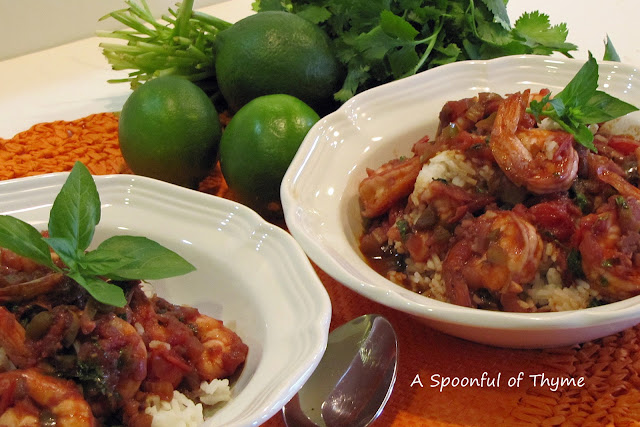 Place the shrimp in a ziplock bag along with the juice from two limes. Set aside.  The lime juice will begin cook the shrimp.

In a mortar and pestle or on a cutting board using the edge of your knife, mash the garlic and salt  to form a paste.

Heat the oil in a large saute pan over medium heat, saute the onions, garlic, celery, and pepper until the onion is soft.  Sprinkle Zatarain's Creole Seasoning over the vegetables as they cook.  Add the chopped tomatoes, tomato paste and red wine, simmer about 10 minutes.

Add the cilantro, basil and shrimp.  Cook until the shrimp is heated through about 5 more minutes.  (When added, the shrimp will not have been totally cooked by the lime juice.  Keep an eye on the shrimp and tails to make certain they turn a lovely pink!) 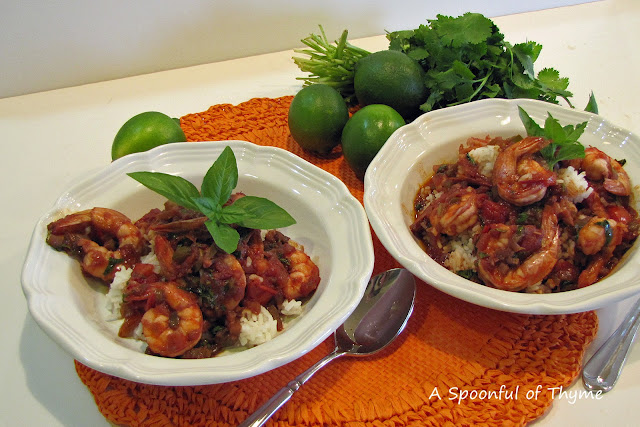 This was really delicious.  I told Mr. T. that I would make it again.  He smiled and said, "I would eat it again!"  Quick to make and easy to adjust to your taste.

It is so much fun to get a blog assignment each month and find the perfect recipe to try and share on revel day.  In case you are not familiar with the Secret Recipe Club, I will give you some background.  Each month club members are assigned a secret blog from which we select recipe to prepare and write about in a blog post.  We keep our assignment secret until  reveal day when everybody's posts appear at the same time.  That takes a little behind the scenes coordination by our new leader, April at Angel Foods Kitchen and Group C's leader, Angela at Big Bear's Wife.  Thanks to both of you!
Labels: Main dish Shrimp