As I paged through the Sunset magazine, the name of this recipe just jumped out at me.  Could this possibly blueberries and rhubarb?  Upon further reading...yes, that is exactly what it is...in this rather unconventional pie!

What is an unconventional pie?  Why it is one that isn't made in a crust.  Then how can it be a pie?  It has shards of crust that are served alongside.....rhubarb ice cream with blueberry sauce!!  This pie is disguised as a sundae...! 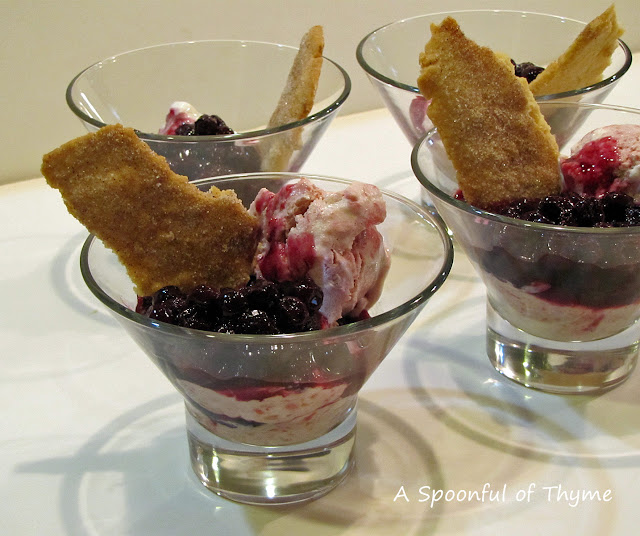 Cook rhubarb with brown sugar in a medium frying pan over medium-low heat until it looks like jam, 20 minutes.  Put in a bowl and chill.  Stir in ice cream and freeze until firm, 3 hours.

Preheat oven to 350° F.  Line a baking sheet with parchment paper.  Mix 1 Tbsp sugar and the cinnamon in a bowl.  Beat butter, 5 Tbsp sugar, the vanilla, and salt in a bowl until light and fluffy.  Add flour and mix on low until large clumps form.

Gather dough into a ball and roll into a 1/4-inch thick round.  Transfer to a baking sheet, sprinkle with cinnamon sugar, and freeze until firm, 10 minutes.  Bake until edges are golden brown, 15 to 20 minutes.  Cool, then break into large shards.

Put berries, cornstarch, lemon juice, and remaining sugar in a small saucepan.  Bring to a simmer over medium-low heat and cook, stirring, until thick and bubbly, 5 minutes. 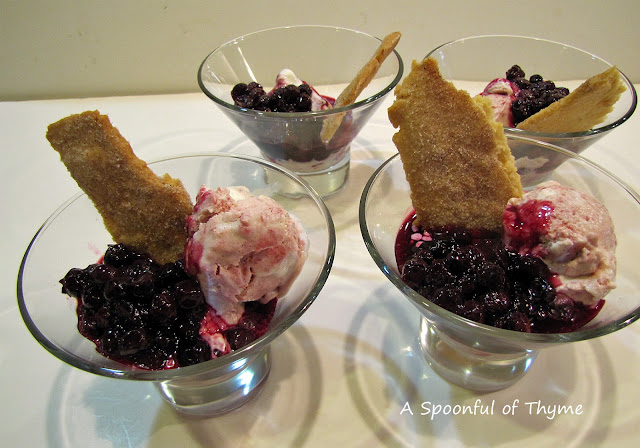 This was my kind of pie!  There is a reason you do not see many pies on my blog.  The biggest is that I cannot seem to make a crust that I can get transferred to a pie dish or a baking sheet.  Even this very easy crust ended up on the baking sheet in pieces.  Good thing nobody will ever know.