In 1984 President Reagan designated July as National Ice Cream Month and the third Sunday of July as National Ice Cream Day as stated by the International Dairy Foods Association.  Hmmm, a day and a month dedicated to this scrumptious dessert that is consumed by 90% of the population of the United States.  In Reagan's proclamation he called for all people to observe these two events with "appropriate ceremonies and activities."  What could be a better activity than blog hop Ice Cream Socials sharing multitudes of recipes!  Suzy at Kitchen Bouquet is having an Ice Cream Social today and La at A Musing Potpourri is having one tomorrow!

When I read about President Reagan's designation I decided to do a little researching and learned that ice cream was popular with many of the nation's presidents.  It is noted that in the summer of 1790 President George Washington spent $200 for ice cream.  In 1813, at President James Madison's second inaugural banquet Dolly served a strawberry ice cream creation to guests.

President Thomas Jefferson's handwritten recipe for Ice Cream is among the many recipes at the Library of Congress.

As I tried to decipher his recipe I noticed that it is only a mixture of three ingredients:  cream, sugar and egg yolks.  I don't find a reference for the addition of vanilla. 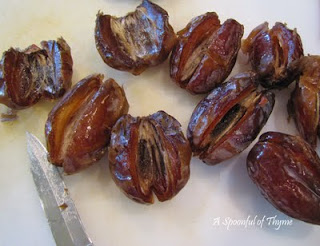 I went to California Fruit Depot a local fruit and nut stand to get some dates.  There were so many varieties available that I had no idea which would be the best in ice cream.  It was recommended that I use the "crown jewel of dates", the medjool dates.   They are larger than most varieties, have more meat and are sweeter.  I also learned that dates are to be stored in the freezer and that freezing them makes it easier to pit them.  They do not freeze solid due to the sugar content...they were lovely when I pulled from the freezer....delicious, too. 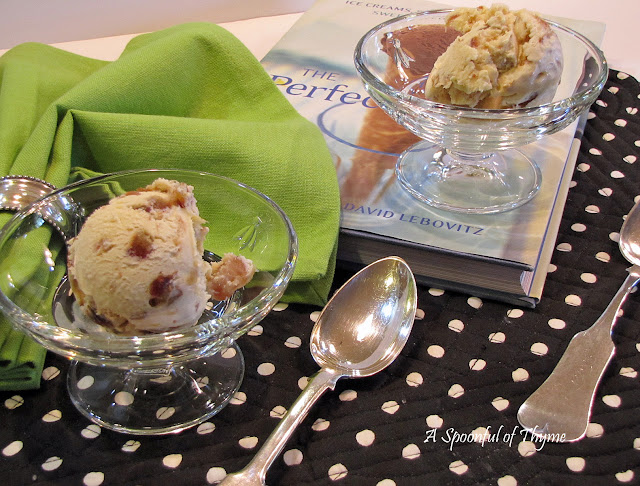 
adapted from The Perfect Scoop by David Lebovitz

To prepare the dates, chop them into 1/2 -inch pieces. Combine the date pieces with the rum in a small saucepan and bring to a boil. Remove from the heat and stir. Cover and let macerate at room temperature for at least 4 hours (this can be done up to 1 day ahead).

To make the ice cream, warm the milk, sugar, and salt in a medium saucepan. Pour the cream into a large bowl and set a mesh strainer on top.

In a separate medium bowl, whisk together the egg yolks. Slowly pour the warm mixture into the egg yolks, whisking constantly, then scrape the warm egg yolks back into the saucepan.

Stir the mixture constantly over medium heat with a heatproof spatula, scraping the bottom as you stir, until the mixture thickens and coats the spatula. Pour the custard through the strainer and stir it into the cream. Mix in the vanilla and rum, then stir until cool over an ice bath.

Chill the mixture thoroughly in the refrigerator, then freeze it in your ice cream maker according to the manufacturer's instructions. During the last few minutes of churning, add the nuts and date pieces. 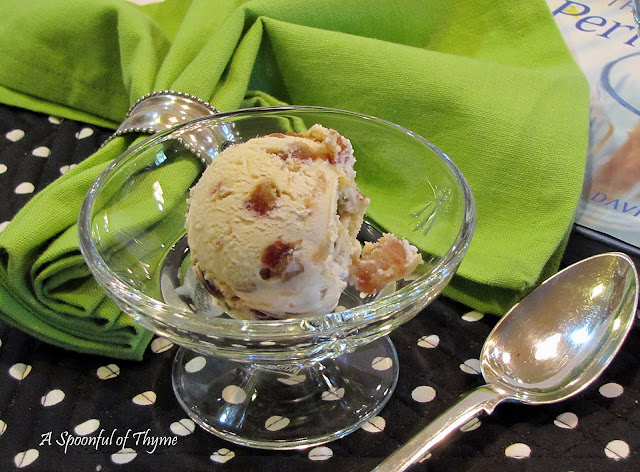 I don't know how to describe the ice cream...it was smooth, sweet, and delicious!  The rum didn't over-power the dessert.  It couldn't have been better.  We shared with our neighbors and they agreed....delicious!
Labels: dates dessert Ice Cream