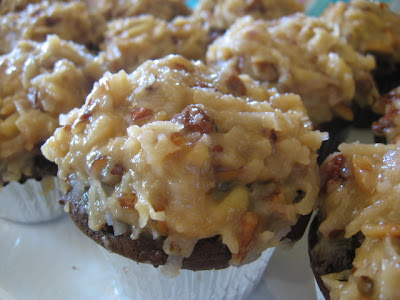 When I was growing up, one of my favorite desserts was German Chocolate Cake. I don't know why I have never made it. Maybe it is the fact that the calories are too many in number! Maybe I was intimidated by the layers. Whatever the reason, I knew that I was making German Chocolate Cupcakes when I saw the recipe in this month's House Beautiful magazine.

They were very simple to make and since they were in smaller portions, I am certain that the calorie intake was smaller also! If I could only stop eating them!

2. In the bowl of an electric mixer fitted with a paddle attachment, cream the butter and both sugars on high speed until light and fluffy, approximately 5 minutes. Lower the speed to medium, add the eggs one at a time, then add the vanilla and mix well. In a separate bowl, whisk together the buttermilk, sour cream, and coffee. 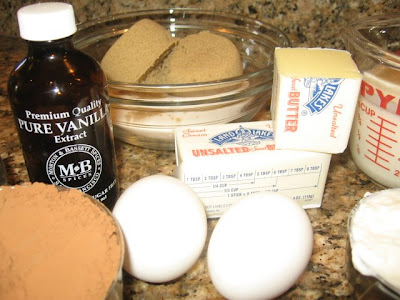 3. Divide the batter between the cupcake pans (I use one rounded 2 1/4 inch ice cream scoop per cupcake.) Bake on the middle rack of the oven for 20 to 25 minutes, or until a toothpick comes out clean. Cool for 10 minutes, remove from the pans, and allow to cool completely before frosting.

1. Melt the butter in a large saucepan over medium heat. Stir in the milk, sugar, egg yolks, almond extract, vanilla extract, and salt with a wooden spoon. Bring the mixture to a simmer over medium heat, stirring constantly with a wooden spoon. Lower the heat to low and simmer for about 5 minutes until the mixture thickens a little and coats the back of the spoon. Don't allow it to boil!! If the mixture gets lumpy, turn off the heat and beat it vigorously with a whisk.

2. Off the heat, add the coconut, almonds, and pecans and allow to cool about 1 hour. Frost the cupcakes with a dinner knife or metal spatula. 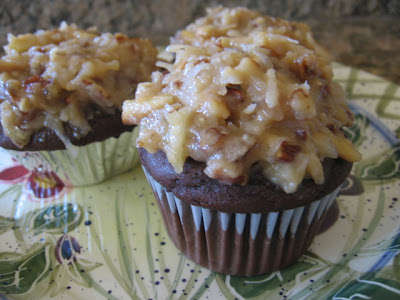 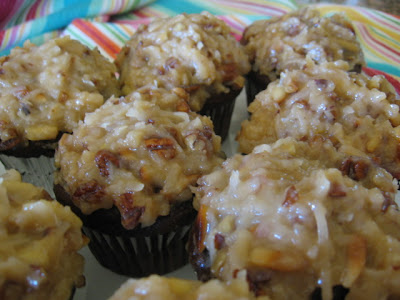 The neighbors benefited from this baking spree. I couldn't leave German Chocolate Cupcakes sitting around the house!

I am linking to the Star Recipe Collection!
Labels: chocolate cupcakes dessert