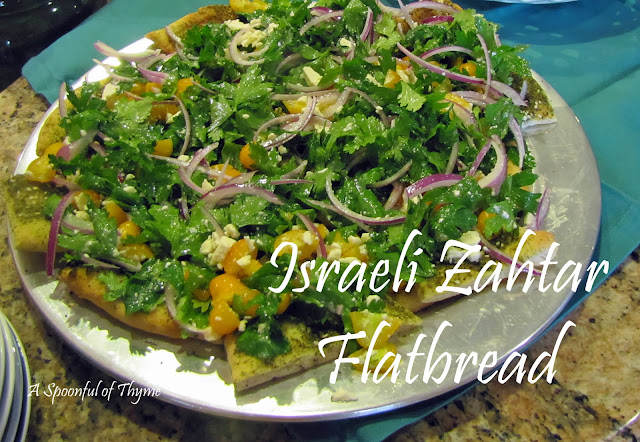 Earlier I mentioned that I was going to use my new cookbook, Jerusalem, when I planned the menu for our next gourmet group.  As I was ordering spices, from the World Spice Merchants in Seattle, I found this recipe that I could not resist adding to the menu.  It was a hit!!

I loved the flavorful flatbread with a little salad of parsley and cilantro. I know that I will be making it again this fall to serve with soup...somehow, that really sounded like a great combination for a meal.

But, wait, what is zahtar?  First, it is spelled many ways:  Zahtar, zatar, or za'atar.  It means thyme in Arabic but in this instance refers to a blend of sumac, sesame seeds, salt and dried green herbs.  The herb is usually thyme but sometimes oregano, marjoram or parsley is used.  Zahtar is a coarsely ground table condiment in the Middle East.  It is most often sprinkled on or cooked with meat or vegetable dishes. And, not to worry, the sumac which is the dominant ingredient in zahtar, is not the poison sumac!! This sumac is from the dark-red berries of a shrubby tree native to the Middle East and parts of Italy. It has a tart, fruity, and lemony flavor.  A perfect topping for this flatbread!

Heat oven to 425° F.  Follow instructions on pizza dough package.  (Some dough must rest before forming.)

Divide into 3 portions and roll them  out thinly.  By rolling the dough into long ovals, and not rounds, they can all fit onto one baking sheet and they will cook more evenly.  Brush the baking sheet with the olive oil and place the dough on it, without any of the sides touching.

Brush the dough with olive oil and sprinkle on the Israeli Zahtar.  Bake in the oven until the crust is golden brown and cooked through.  Since there is only oil and spice on the dough, keep an eye on it so that it doesn't burn.

While the flatbread is baking, make the salad for the top of the flatbread.  Combine the rest of the ingredients (except for the lemon juice and olive oil), mixing well.

When the flatbread is done, remove from the oven.  It will be easier (and less messy) to cut the flatbread into pieces before topping with the salad.  Put the cut wedges on a serving platter.

Add the lemon juice and 2 tablespoons olive oil to the salad and toss to coat.  Evenly top the flatbread with the salad.

Additional olive oil my abe drizzled on top before serving. 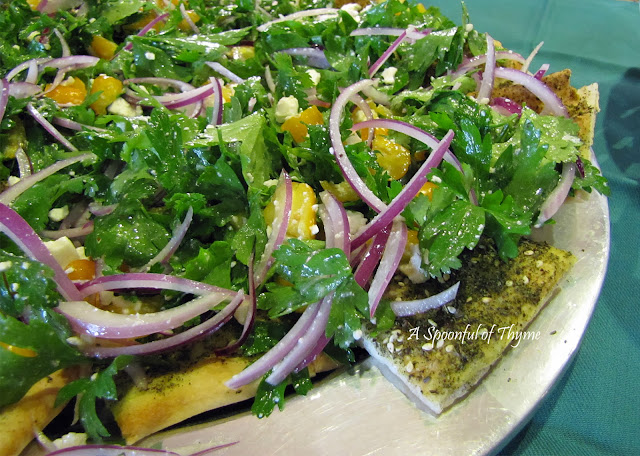 If you are ever in the Seattle area you won't want to miss stopping by the World Spice Merchants. They have a wonderful selection....and their turn-around time is great.