Skip to main content
Labels
Posted by Kathy Walker May 09, 2013 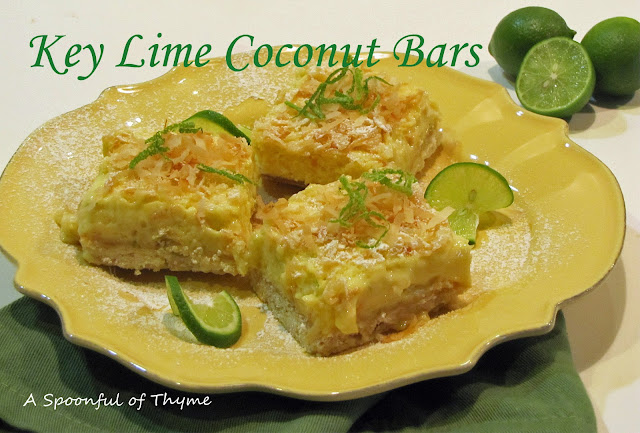 I put the lime in the coconut and ate it all up....

Well, almost all up...with something this rich and tasty
I shared with the neighbors!

It is time once again for the Dessert Challenge hosted by Lady Behind the Curtain.  It is a personal challenge.  Participants are given two ingredients, such as lime and coconut, and must make something tasty!

I had a hard time choosing what to make this month.  I found some mouthwatering cupcakes that were at the top of the list until the last minute when I realized that I had made cupcakes for last month's challenge.  Then I danced around with the thought of making a tart or rice pudding...but,  I ended up with these sweet and tart Key Lime Coconut Bars, instead....it was not a mistake!!

I enjoyed the roasted coconut in the pastry as well as the sprinkle on the top of the bars.  I must admit, though, that juicing key limes takes a lot longer than anticipated!  The are tiny little guys! 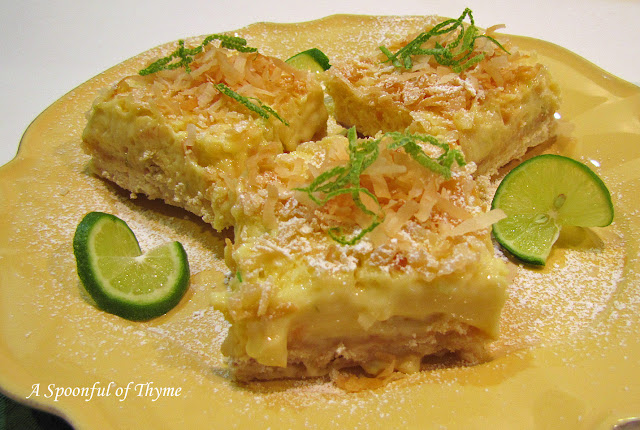 Spread coconut on a rimmed baking sheet, and toast until golden brown, 6 to 8 minutes, tossing every 2 minutes to ensure even browning.  Remove from oven; transfer to a plate to cool.

In a large mixing bowl,  combine flour and sugar, and add half the toasted coconut .   Using a pastry cutter, cut the butter into the flour-coconut mixture until it resembles coarse meal.  Pat mixture into a 9 X 13 inch dish and bake until golden, 20 to 25 minutes.  Allow to cool slightly.

Meanwhile, beat together egg yolks and condensed milk with a whisk until thick.  Gradually beat in lime zest and juice.  Pour into cooled crust, sprinkle with remaining toasted coconut, and bake until just hot, 6 to 8 minutes.  Cool completely, then chill until ready to serve.  Cut into squares.  Before serving, sprinkle with confectioner's sugar, and garnish with lime zest, if desired.

Oh, I almost forgot...I have put lime and coconut together in the past.  I have a recipe for some great Chewy Coconut Lime Sugar Cookies...since it would be cheating to revisit them for this post, I am only sharing....

Next month's challenge is strawberries and raspberries!  Yum!