I am trying something new this month.  I am participating in the Crazy Cooking Challenge!  The Crazy Cooking Challenge offers an opportunity to make a featured food each month and post about it.  This was the brainchild of Tina at Mom's Crazy Cooking.  This month's featured food is cheesecake!  Now who can pass up that?!  Each blogger is to find a recipe for the featured food.  The recipe can be from another blog, a magazine, a scrap of paper in your recipe box, a cookbook, your neighbor...anywhere.  The only requirement is to make it, blog about it, credit your source.  What could be easier?

I have never been a cheesecake lover (I do believe I have shared that before) and actually, when I saw the featured food, I was a bit disappointed.  But, I thought about it and realized that there have been cheesecakes that I did like and that I do have the absolute best, to die for, source...I just rarely make anything from it.  That was just about to change.

My source?  I bet you want to know what the absolute best, to die for, source is?  It is Junior's Cheesecakes from the publishers of Fine Cooking. (And there just happens to be a preview on Google Books)  New York Style Cheesecakes...and lots of them!

I must admit that I could have sat down with the LARGE serving spoon and eaten the batter before baking....hmmm...are there fewer calories if it isn't baked?  If so, I am on board!  The Cherry Crumb Cheesecake starts with a sponge cake crust, followed by cherry filling, cheesecake, more cherry filling and then a cinnamon crumb topping!  For me the best part was, well, everything.  The cheesecake itself was not overly sweet, it was creamy and light as opposed to the very dense cheesecakes I am used to being served. 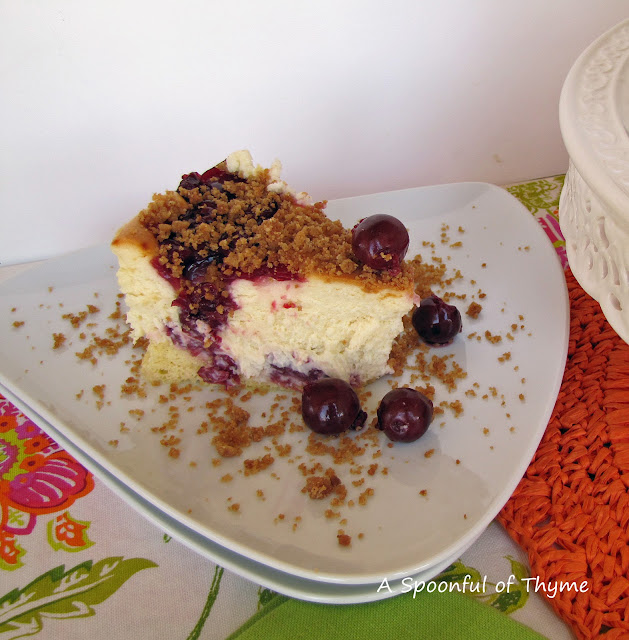 Preheat the oven to 350° F. and generously butter the bottom  and sides of a 9 inch springform pan (preferably nonstick).  Wrap the outside with aluminum foil, covering the bottom and extending all  the way up the  sides.

In a small bowl, sift the flour, baking powder, and salt together.

Beat the egg yolks in a large bowl with an electric mixer on high for 3 minutes.  With the mixer running, slowly add 2 tablespoons of the sugar and beat until thick, light-yellow ribbons form, about 5 minutes more.  Beat in the extracts.

Sift the flour mixture over the batter and stir it in by hand, just until no more white flecks appear.  Now, blend in the melted butter.

Wash another mixing bowl and the beaters really well.  Put the egg whites and cream of tartar into the bowl and beat with the mixer on high until frothy.  Gradually add the remaining sugar and continue beating until stiff peaks form (the whites will stand up and look glossy, not dry).  Fold about one-third of the whites into the batter,  then the remaining whites.  Don't worry if you still see a few white specks, as they'll disappear during baking.

Gently spread out the batter over the bottom of the pan, and bake just until set and golden (not wet or sticky), about 10 minutes.  Touch the cake gently in the center. If it springs back, it's done.  Watch carefully and don't let the top brown.  Leave the crust in the pan and transfer the pan to a wire rack to cool.  Leave the oven on while you prepare the cherry filling and cheesecake batter.

Drain the cherries, reserving 1 cup of the juice (if necessary, add water to make 1 cup).  Refrigerate 7 cherries for decorating the cake.  Stir the cornstarch into the juice in a small saucepan until completely dissolved, then stir in the sugar.  Bring to a full boil over medium heat.  Cook and stir constantly until the mixture turns clear and thickens (very important), about 2 minutes.  Remove from the heat and stir in the lemon juice and food coloring, if you are using.  Fold in the cherries.  Let cool while you make the cheesecake batter.

Put one package of the cream cheese, 1/3 cup of the sugar, and the cornstarch in a large bowl.  Beat with an electric mixer on low until creamy, about 3 minutes, scraping down the bowl several times.  Beat in the remaining cream cheese, one package at a time, scraping down the bowl after each one.  Increase the mixer speed to medium and beat in the remaining 1 cup sugar, then the vanilla.  Blend in the eggs, one at a time, beating well after adding each one.  Beat in the cream just until completely blended.  Be careful not to over-mix.  Spread half the cherry mixture over the crust.  Gently spoon the cheesecake batter over it, then top with the remaining cherry mixture.  Be sure to spread the cherries out evenly close to the edges.  (You are actually making an  outer ring  of cherries.  There won't be any in the center of the ring.  Hide sight is wonderful!)

Place the cake in a large shallow pan containing hot water that comes about 1 inch up the sides of the springform.  Bake until the edges are light golden brown and the top is slightly golden tan, about 1 1/4 hours.  Remove the cheesecake from the water bath, transfer to a wire rack, and let cool for 2 hours (just walk away--don't move it!!)  Cover loosely with plastic wrap and refrigerate until completely cold,  preferably overnight or at least 4 hours.

Make and bake the crumb topping.  To decorate, release and remove the sides of the springform, leaving the cake  on the bottom  of the pan.  Place on a serving plate.  Top the cake  evenly with the cinnamon crumbs and decorate the center with the reserved cherries.  Refrigerate until ready to serve.  Slice with a sharp straight-edge knife, not a serrated one.  Cover any leftover cake and refrigerate, or freeze for up to one month.

Preheat the oven to 350° F. Generously butter a jellyroll pan.

Mix the flour, brown sugar, cinnamon, and lemon rind in a medium bowl.  work in the butter with your fingers until coarse crumbs form.

Spread out the crumbs in the pan.  Bake until the topping is golden brown, bubbly, and slightly crunchy, about 15 minutes, tossing the mixture with a spatula 2 or 3 times.  Watch it carefully.  It's ready when it turns a light golden brown.  Let the mixture cool in the pan on a wire rack for at least 30 minutes, then break it into fine crumbs.  (Extra topping may be put in  a zip  lock and frozen for up to one month.) 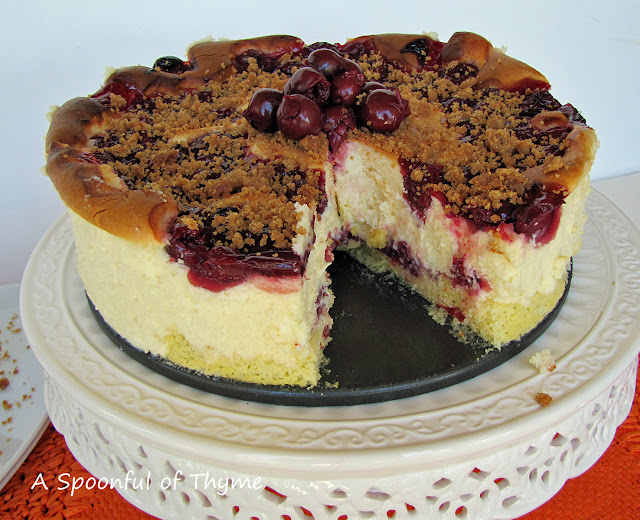 While cheesecake is not my all-time favorite dessert, I have made a few on occasion.  This Apple Cinnamon Cheesecake was made when I was assigned dessert for our gourmet group but I must admit that the Cheesecake Cupcakes my daughter, son-in-law and I made for Easter were my very favorite....they are just a bite so you don't feel as though you are eating a whole week's worth of calories just for dessert!

So...on with the cheesecake party for the Crazy Cooking Challenge!