Thank you for indulging me as I ranted on about Kate's Terrible, Horrible, No Good, Very Bad Day! I think I will join Alexander when he moves to Australia. Most of you are probably familiar with this children's book written by Judith Viorst. I love it! It dawned on me today that I actually had ended up in Australia! I visited Suzie at her wonderful blog, Munch+Nibble, and she is in Australia, so, in a sense, I was there. I do feel better also!

The Kitchen Gnome is barbecuing so I mixed up our favorite marinade. It came from Ron who was our neighbor when we first got married. Ron could barbecue a mean tri tip! A tri tip (sometimes called a triangle roast) is a cut of meat that is readily available in our area. I have learned that it isn't a cut of meat in most markets outside the state. It will be. Over the years it has picked up in availability.

The tri tip is only found on one side of the beef. Many butchers grind it into hamburger. It is at the bottom of the sirloin. Not only does it have a great flavor, but also tends to be lower in fat than most other cuts, so it's a good lean cut. It is a great roast or it can be cut into steaks, either way, it is versatile and a great cut of meat. 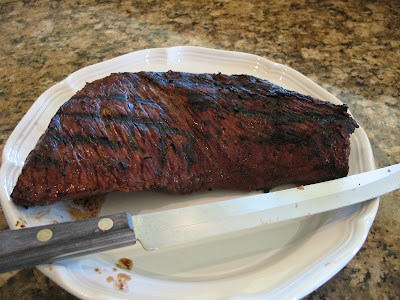 Mix marinade in a 2 cup measuring cup. Put the trimmed tri tip in a zip lock and pour in the marinade. Turn the meat frequently. Makes enough for a six pound roast. 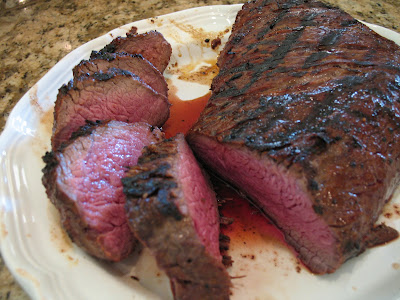 The dinner was delicious as was the wine!

This was the only picture I had....it is a bit messy, sorry!
Labels: Beef Main dish marinade