I answered the telephone to find my friend calling as opposed to the usual telemarketer.  That was a very nice treat!  She called to ask me if wanted some tomatoes.  Well, yes, I would love a few tomatoes.  Her concept of a few tomatoes was a huge box (apple-size box) of freshly picked Roma tomatoes!  How lucky is that!!! 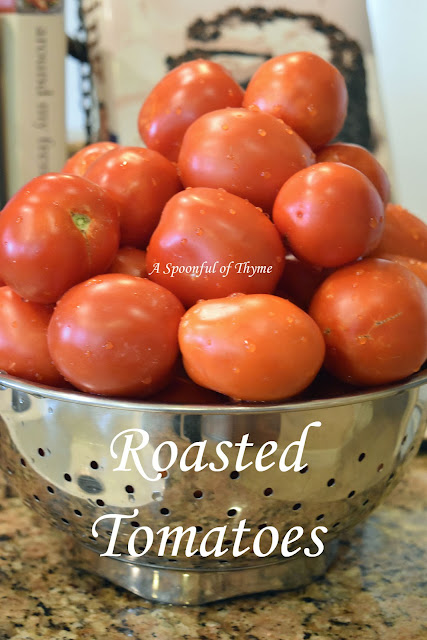 I have never been faced with that many tomatoes!  The only logical choice was to share a few with a neighbor and then start roasting!  I faced a similar situation at my daughter's house last year.  She had so many tomatoes that I didn't know where to begin.  Ina Garten came to the rescue then as she did now.  In Ina's cookbook, Barefoot Contessa Back to Basics, it is suggested that olive oil and balsamic vinegar be drizzled on the tomatoes....that sounded great to me.  So I gathered everything together and after heading to the herb garden to trim the basil plant, all was ready!

My plan was to roast and freeze for use in the winter when store-bought tomatoes taste like cardboard!  This recipe only yields a serving for 4 to 5 people.  I just increased the amounts based on how many tomatoes I had on the baking sheet.

Arrange the tomatoes on a baking sheet in a single layer, cut sides up.  Drizzle the olive oil and balsamic vinegar over the tomatoes. Then sprinkle them with the garlic, sugar, salt ad pepper.

Place the sheet in the oven and roast for 25 to 30 minutes, until the tomatoes begin to caramelize and the flavors are concentrated.

Remove from the oven and sprinkle with julienned basil leaves.  Serve warm or at room temperature.

NOTE:  Since I was freezing the tomatoes for future use, I allowed them to come to room temperature and then placed them into freezer bags.

I varied the herbs that I used.  Some trays featured oregano and rosemary!  Just remember to add the fresh herbs after taking the tray from the oven. 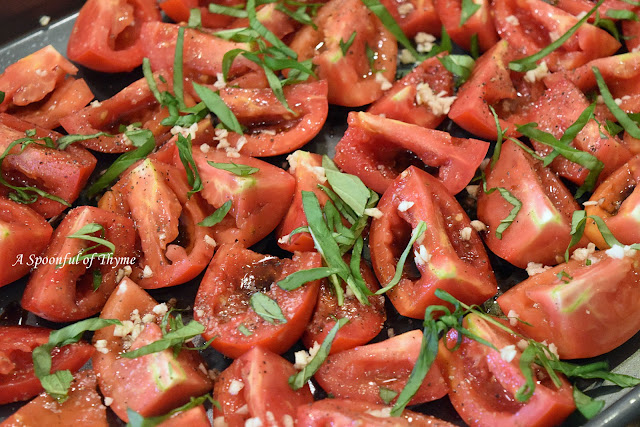 I roasted fifteen trays of tomatoes!  I do believe I have enough tomatoes in the freezer to last for a very long winter!  You will notice that, in the picture of the first tray, I got a bit excited about the basil and sprinkled it on before baking....not a good idea!!  Do wait! 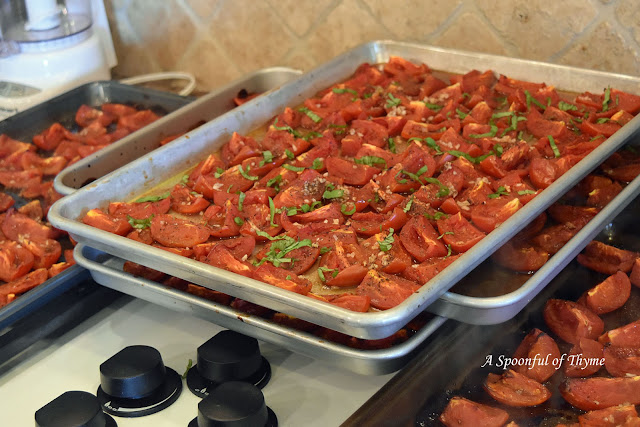