Ellie also said that she rarely posts anything that starts with a box cake mix. She made an exception this time and I am so happy that she did!  From my point of view, there isn't anything wrong with starting from the known.  It can help shorten the process and if the end result is tasty, then it shouldn't matter.  Wouldn't you agree?

In making the cake, I did get a bit nervous about the volume of glaze that I was incrementally putting on the cake.  I knew that it was supposed to soak into the cake but, as I said, I got nervous so with about 1/3 left, I halted.  I think I should have gone ahead with the entire amount.  You can see the variation in the color of the cake in the picture.  That tells me that I wasn't overdoing it, it was absorbing just as it should.  I am not beating myself up because the taste was great!!  But, next time I won't panic. 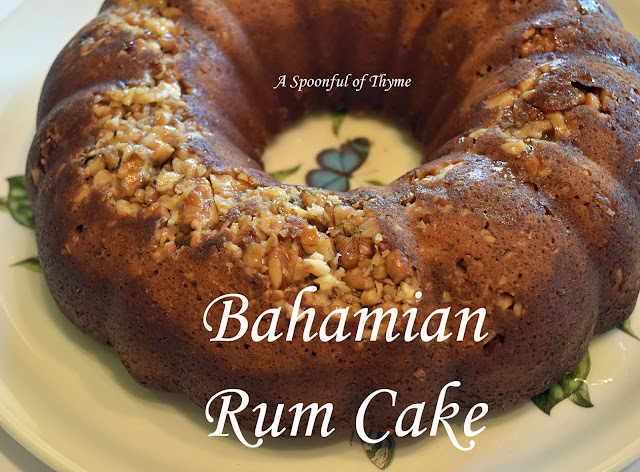 Prepare the bundt pan:  Thoroughly grease a standard-sized bundt pan with butter.  (It was suggested that cooking spray also be applied.  I did not.) Dust the inside with about 1 teaspoon flour.  Shake to distribute evenly.

Sprinkle the nuts on the bottom of the pan.

Mix the remaining ingredients in a mixer bowl.  Beat on medium until everything is incorporated.

Gently pour the batter into the bundt pan trying not to disturb the layer of nuts.

When the cake is almost finished baking make the glaze.

Melt the butter in a small saucepan.

Stir in the water and the granulated sugar.  Stir to dissolve the sugar.  Bring the mixture to a boil. Boil, stirring constantly, for five minutes.

Finish the Cake
Watch the cake closely. When the cake is a golden brown and pulling slightly from the edges of the pan and a toothpick inserted into the cake comes out clean, remove it from the oven.  (My cake was done quite quickly so do keep an eye on it.)

Immediately, gently run a thin knife around the outside edges and the center of the cake.  (I just pulled gently around the edges.)  Using a toothpick or wooden skewer, poke many holes into the cake.

Begin spooning the glaze over the cake while it is still hot and in the bundt pan.  Do this in 3 or 4 stages, allowing the glaze to absorb into the cake.  Wait about 5 minutes between each stage.

When the last of the glaze has been used, allow the cake to sit for 5 minutes. Turn the cake over onto a large cake plate or cake stand.  The cake should slide out of the bundt pan and onto the plate.  Allow the cake to cool fully.

Sprinkle the cake or the individual servings with powdered sugar before serving.

NOTE:  The flavor improves over time.  I recommend allowing the cake to sit overnight or at least six hours before serving. 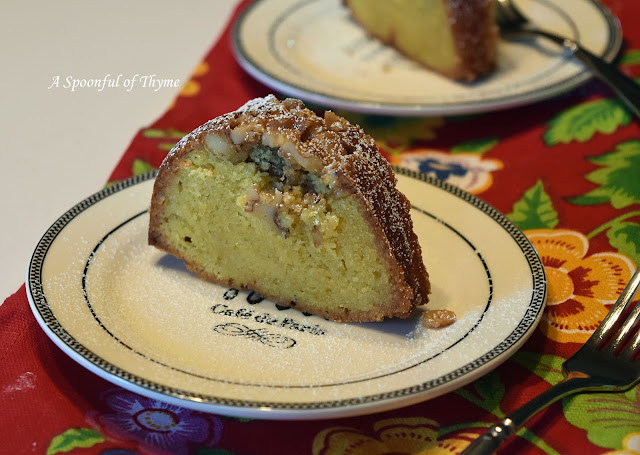 I learned about Ellie's blog through The Secret Recipe Club.  She was my assignment this month. When you visit The Hobo Kitchen you will find a variety of recipes, I know I did. I was tempted to make the Mocha Bread with Espresso Glaze and the Chicken Pesto Pizza and I will probably still do both...starting with the pizza!

I was really happy with the Bahamian Rum Cake and even though it may not be totally authentic, it worked for me and I fully intend to make it again!  Thank you, Ellie, for sharing!