Sometimes, simple is best.  I was reminded of that the evening I served this colorful, salad topped with tender and juicy chunks of chicken breast, perfectly grilled peppers and onions, and creamy ripe avocado slices!

It was a light and refreshing meal. Which was what we were looking for.  Terry didn't have much of an appetite so I thought he might be enticed to eat when he saw this colorful salad....and he was!

You will love this chili lime marinade that also doubles as a dressing.  It was so tasty that I can see it appearing frequently! 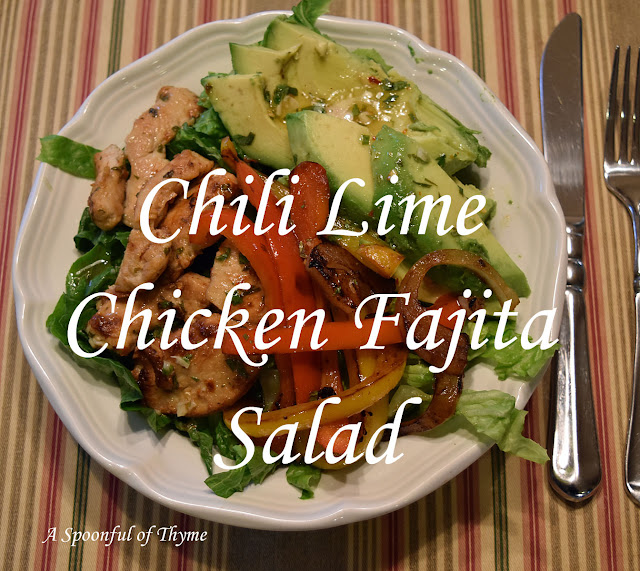 Combine the marinade/dressing ingredients by whisking briskly.  The mixture will be divided into two parts.  Pour half of the mixture into a small jar. Refrigerate to use later as the salad dressing. Pour the second half of the marinade into a zip lock bag.  It will be used as the marinade.

Place the chunky chicken slices into the zip lock bag with the marinade.  Allow the chicken to marinate for at least two hours

Heat 1 tablespoon olive oil in a skillet.  Add the chicken pieces and cook over medium high heat. Grill the chicken until golden brown, crispy and cooked through.  Grill in batches to prevent steaming the chicken.  Remove the chicken to a small plate to rest.

Quickly wipe the pan with a paper towel.  Add about 2 teaspoons of oil to the skillet.  Quick-fry the onion and pepper strips to desired doneness.

Cut the chicken chunks into small slices, if desired.

Place chopped romaine into each serving bowl.  Top with chicken slices, pepper and onion mixture, and sliced avocado.  Remove the dressing from the refrigerator.  Shake the jar to mix.  Drizzle the dressing over the top.  Serve garnished with cilantro and sour cream, if desired. 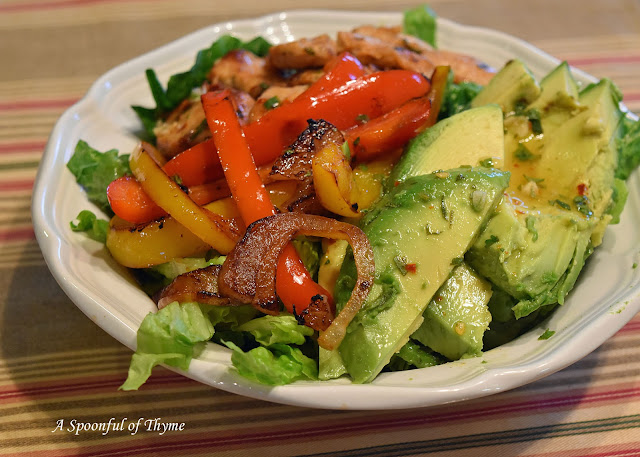