I have always been intrigued by kugel.  I have always wanted to sample it.  I have always wanted to make it.  So, I was delighted to find a recipe for Lokshen Kugel on Dena's blog, Oh!  You Cook! Now, I had no idea what a lokshen was but I did know that a kugel was a type of pudding or casserole made from noodles.  After a little reading I learned that Lokshen is the Yiddish word for noodles. Alright, I am on a roll.....Lokshen Kugel is a noodle pudding or casserole.  Today it was a pudding as I determined to make it sweet as opposed to savory!

Dena told me that a kugel made for dessert has all kinds of tasty ingredients:  cinnamon, sugar, sour cream, cottage cheese, butter and fruit....to start.  This sounded pretty tasty to me.  I continued reading about kugel and learned that the ratio of sugar to noodles is usually 1 1/2 cups sugar to a 12 ounce package of noodles. So, I did increase the sugar from the original recipe.  I also added a topping of crushed corn flakes mixed with cinnamon and sugar.

This was super good.  I served it at a dinner with our dear friends.  Steve and his brother both said that this reminded them of the kugel that their grandmother used to make.  They were really pleased to savor this wonderful dessert and I was very pleased that my first attempt was well received! Thank you, Dena for sharing! 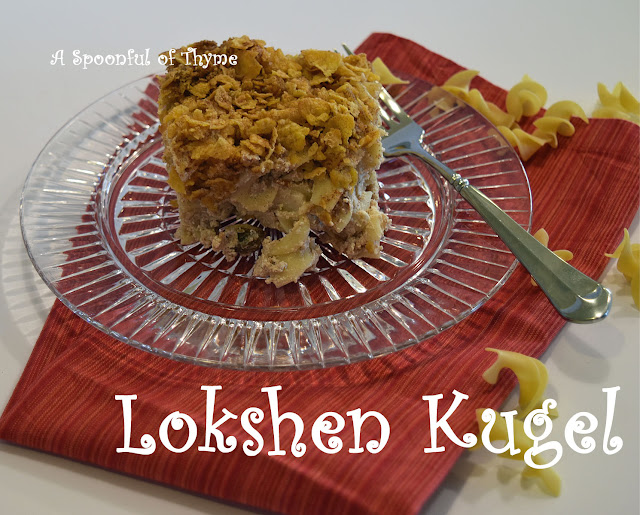 In a large mixing bowl stir together the cottage cheese, sour cream, and melted butter.  In a small mixing bowl, lightly whisk the eggs.  Add the sugar, cinnamon, nutmeg, salt and vanilla.  Then, whisk.  Stir the egg mixture into the cheese mixture and then pour over the noodles. and mix lightly.

Add the diced apple and raisins.  Gently mix until the noodles are completely coated with the egg-cheese mixture and fruit is evenly distributed.

Crush the cord flakes and mix with the cinnamon and sugar.  Sprinkle the mixture over the top of the noodles.

Cover the pan loosely with foil.  Bake for about thirty minutes.  Remove the foil and continue to bake for an additional twenty to thirty minutes or until lightly browned.

Serve the kugel hot sprinkled with additional cinnamon and sugar if desired, 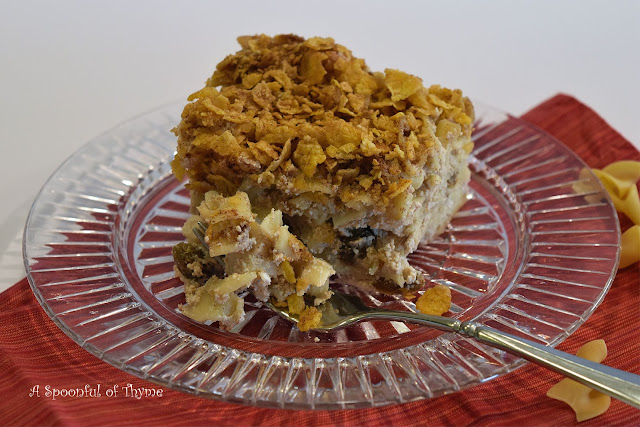 Dena had so many great recipes on her blog that it was hard to narrow down the choices.  I considered the Garlic Cheddar Biscuits and the Potato Latkes  but the kugel just had a special gravitation!  :-)

I need to tell you more about Dena.  She is quite the cook and author of the cookbook, The Everything Kosher Slow Cooker Cookbook.  It is filled with kosher recipes and tons of tips for preparing some amazing recipes!  If you have time, visit Dena's blog, it is filled with stories, history, musings, and recipes that will warm your heart and your tummy!

I learned about Dena when I was paired with her, this month, for the Secret Recipe Club.  What a treat it was.  Dena has a wonderful blog with lots of recipes making it very difficult to focus on just one!!

I hope you have some time to visit other members of the Secret Recipe Club.  You won't be disappointed.