We have cold weather!  I never thought it would happen, but it has.  I am finally getting to wear the coat that I bought last year...that it never got cold enough to wear.  I am happy.

Along with being "coat happy", I am happy that it is cold enough to make some darn good comfort food.  I was craving a pot of beans...some spicy ones, when I found a recipe in the new Sunset magazine that could not go untested.  Except that I probably never really follow the recipe exactly, but I stick pretty close.

I knew that these beans were going to be quite spicy as the recipe called for chipotle chile powder and a jalapeño...two of my favorite things.  I wasn't crazy enough to use a quarter cup as was mentioned in the introduction but I do like beans with a punch and that is what these had.  Besides, beans and beer and heat are always a good thing!

You can lighten up on the spiciness by reducing the chipotle chile powder to a teaspoon and only use half of a jalapeño, if you like.  We found the beans to be spicy but not unpleasantly so.  I added a dollop of sour cream when I served them and that made them pretty close to perfect. 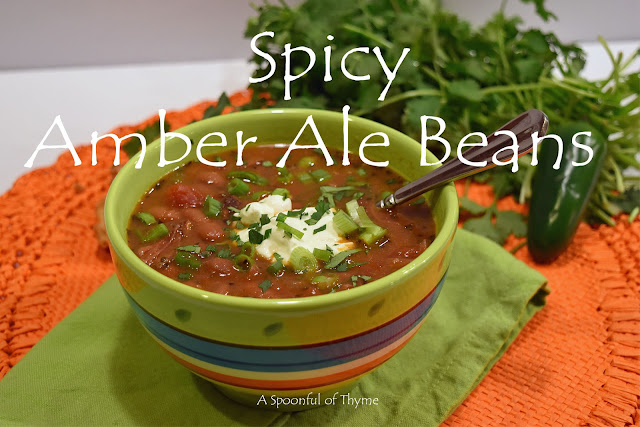 Sort and rinse beans.  Place beans in a heavy Dutch oven.  Add enough water to cover by three inches.  Bring to a boil.  Boil two minutes.  Remove from heat.  Cover and let stand for one hour. Drain beans and put in a slow cooker.

Add the ham hock, beer and chicken stock to the slow cooker.  The beans should be just covered with liquid.  Add water if needed.  Set the slow cooker to low.

In a medium frying pan, toast the chile powder and the cumin until fragrant, bout 30 seconds.  Scrape the spices into the slow cooker and cover.

Cut the bacon crosswise into quarter inch strips. In the same frying pan, cook the pieces of bacon until crisp.  Remove from the pan and drain on paper towels.  Set aside.  Drain all but about 1 1/2 Tablespoons of drippings from the pan.  Add the diced onion and chopped jalapeño.  Cook until the onion is light brown.  Add the garlic and cook until fragrant, a few seconds.  Mix the bacon and oregano into the onion mixture.  Stir and add the mixture to the slow cooker.  Add the can of diced tomatoes.  Cover and cook until the beans are tender about 6 to 8 hours.

Remove the ham hock to a plate and using two forks shred the meat from the bone.  You may put the shredded ham back into the slow cooker or you may set it aside.  Set the slow cooker to high without the lid.  Reduce the liquid to your desired thickness.  Season with salt.

Serve the beans in bowls topped with shredded ham (unless you elected to mix it back into the beans), a dollop of sour cream, and the chopped green onions and cilantro. 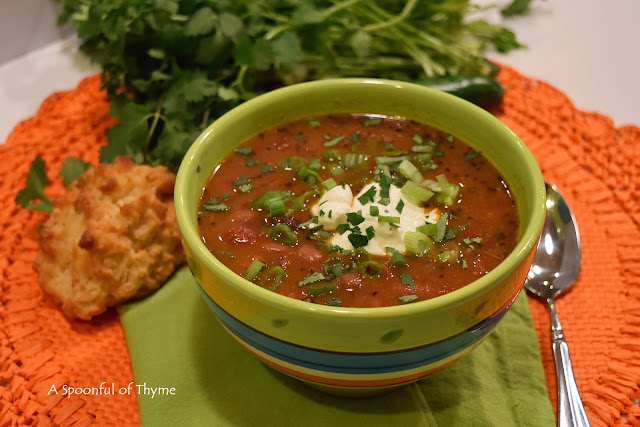 I was sorry to see the last of this pot of beans disappear....I think I need to make more, as it is really cold once again!
Labels: Beans Ham Main dish