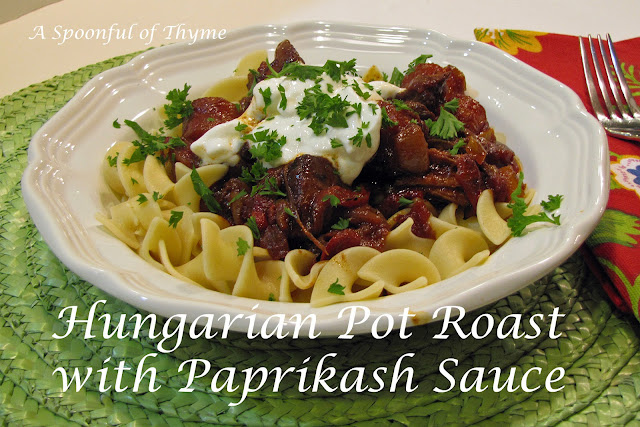 I have been in Seattle the last week visiting my four month old granddaughter.  The cold weather has had all of us craving comfort food.  My daughter suggested a pot roast and we wanted something a little different, so it became Hungarian Pot Roast!

There are many kinds of paprika and for me, getting them all straight in my mind has been a challenge.  Basically, if a recipe calls for paprika, it is the Hungarian that is most commonly used.  Hungary has the perfect climate with an abundance of sunshine that is needed to grow this pungent spice.  In Hungary, there are forty types of paprika grown, isn't that amazing?  Based upon the weather predictions for the up-coming year, the farmers make a determination as to which of the crops will yield the sweetest and most colorful paprika.  It is the amount of sunlight prior to harvest that influences the quality of the paprika.

We used Hungarian Half-Sharp Paprika from Penzey's Spices.  However, we are headed to the World Spice Market downtown to select some of the smoked sweet and smoked spice paprikas.  The combination should produce a super sauce the next time this dish is prepared.  The amount of paprika used is really a matter of taste.  We really like a spicy flavor and used 3-4 Tbsp  of the Half-Sharp Paprika.  If you prefer something less spicy, go easy on the paprika or you will be disappointed.  remember, paprika has "spicy heat" to it!....my rule of thumb is to go easy the first time and add additional as you adjust the seasonings....or additional the second time you prepare the dish!


Sprinkle chunks of roast with salt and pepper.

Heat olive oil in a dutch oven.  Add roast and brown all the sides and then remove to a plate. Add a little more oil to the pan and cook the onion slices, carrots and paprika until lightly browned.

Add broth to the pan to deglaze and reduce slightly. (I did not remove the vegetables when I added the broth to deglaze.) Drain the red peppers and cut into slices and add to the pan along with the tomatoes. Return the meat to the pan. Cook at 350° F. for 3 to 4 hours. Check at 3 hours and break up/shred the larger chunks of meat.  Continue baking if needed.

There was not a great deal of liquid in the pan after four hours.  We served it over egg noodles with a dollop of sour cream. 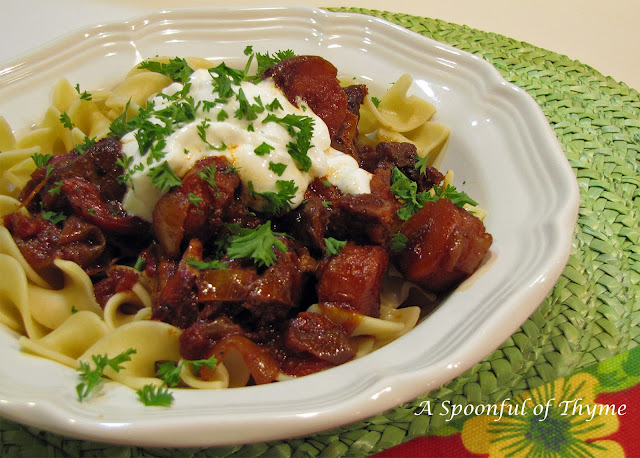