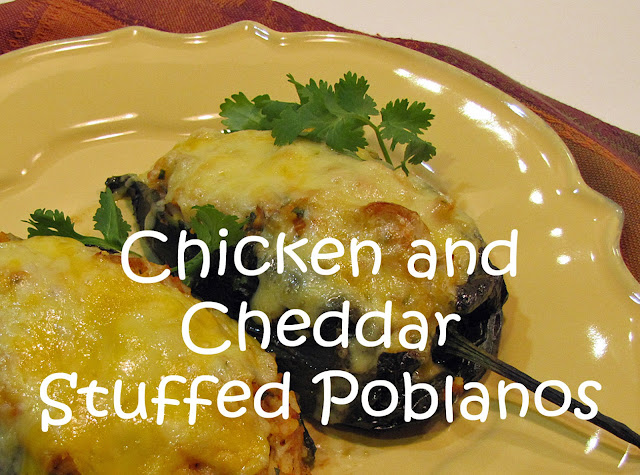 When I saw these on a Debby's blog, A Feast for the Eyes, I knew that they would be making an appearance at my house...and what a great idea!  They are delicious.  I have always liked stuffed peppers but had only stuffed bell peppers.  I have been missing out!

I had some leftover chicken and only had to cook a little rice, chop a little tomato, onion and cilantro and grate some cheese...very easy and quite tasty.


Chicken and Cheddar Stuffed Poblanos
A Feast for the Eyes and Fine Cooking, December 2008

Position an oven rack about 4 inches from the broiler and heat the broiler on high.  Line a large rimmed baking sheet with foil.

Slit the chiles from stem to tip and set on the baking sheet.  Broil, turning every few minutes, until blackened all over, 5 to 8 minutes.  Let cool slightly, peel off the skins, and cut out the seed cores, leaving the stems on. (I used a spoon to scrap out the seed cores.)  Turn the chiles inside out, flick out any remaining seeds, and turn right side out.  Return the poblanos to the baking sheet.

Puree the tomatoes, onion, garlic, oregano, cumin, cinnamon, and 1/2 tsp salt in a food processor.  Heat the oil in a 12-inch skillet over medium heat.  Add the puree and cook, stirring frequently, until the liquid has evaporated and the mixture looks thick and pulpy, 8 to 11 minutes.  Remove the pan from the heat.  Stir in the chicken and rice, and then 1 cup of the cheese, the cilantro, and the lime juice.  Season to taste with salt.  Divide the filling among the peppers, wrapping the sides of the peppers up and around the filling, some of which will still be exposed. 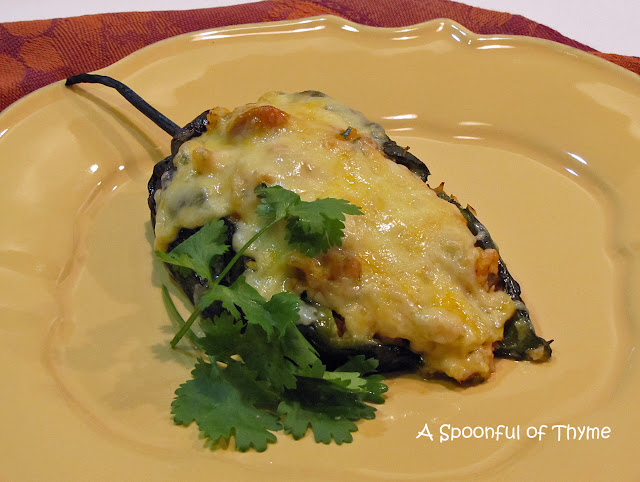