Not Just Any Irish Soda Bread!

When I first tried Irish Soda Bread I was less than impressed.  It was served at one of our gourmet dinners many years ago.   I am not certain what I expected but it certainly wasn't the flat, blah taste that I encountered.  Since then, I have been on a quest:  Find a recipe that I like!  So, each year I seem to try a "new" recipe for Irish Soda Bread...well, new to me.  Being a traditionalist, I of course go looking for the traditional Irish Soda Bread, not just any.

For the last couple of years I have made Mrs. O'Callaghan's Soda Bread.  It was featured in the March 2010 issue of Bon Appetit.  It had a very nice taste and baked up nicely.  It was a no nonsense recipe worthy of repeating.

This year I stumbled upon another recipe for Irish Soda Bread said to be traditional.  It moves up the ladder in front of Mrs. O'Callaghan's Soda Bread.  I now have a new favorite!  The original recipe came from MelindaLee.com.  Melinda broadcasts a radio program called Food News.  It was definitely news to me that I would find such a great soda bread!

Now, I guess I must fess-up about the cooking adventure.  I was having a great time prepping the ingredients for the bread.  Everything was pre-measured and ready to go or so I thought.  The dough was thick, I spooned it into the skillet, admired the little pats of butter on top, popped it into the oven and anticipated the results!  I started to clean up and noticed the sugar canister...when...oh,  no....I did not remember measuring out any sugar.  I grabbed a potholder and pulled the bread out of the oven and dumped it back into the bowl.  (I should tell you that it was only in the oven three minutes.)

I added the sugar and mixed it in along with the butter that had been on top and was partially melted.  I spooned the dough back into the pan, dotted the top with little pieces of butter, once again...and popped it back into the oven.

So, my recipe has a little bit more butter than was called for and it turned out just great!  What's a little extra butter? 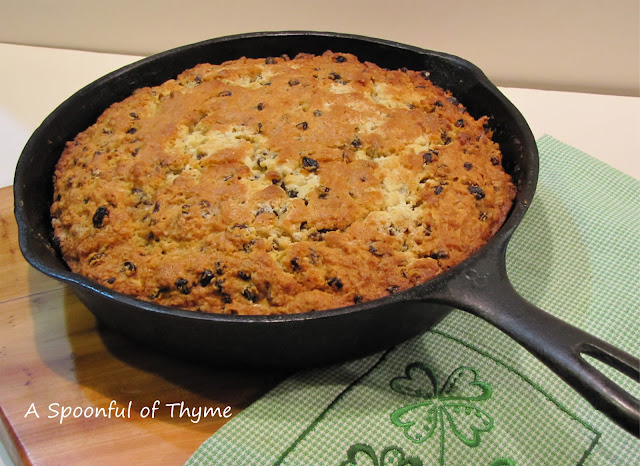 Smear 2 Tbsp of the butter evenly in the 10" road cake pan or cast iron skillet
Line the pan with a circle of parchment and grease with the remaining butter.

Melt another 2 (or 4 if you like) Tbsp of butter and set aside.

Spoon batter into prepared pan or skillet and gently smooth the top.  Dot the top with the remaining 2 Tbsp of butter.

Bake about 60 minutes until golden and puffed.  (Skewer inserted into center of loaf with come out clean.  (If using a cast iron skillet check the bread at 45-50 minutes.  I removed mine at 50 minutes.)

Cool slightly, then turn out soda bread from its baking pan onto a cake rack to cool completely.

Note:  Cast iron pans really hold the heat and will continue cooking the bread.  Remove the bread right away if using cast iron.

Bread may be returned to the pan for serving, if desired, cut into wedges.  May be warmed gently before serving. 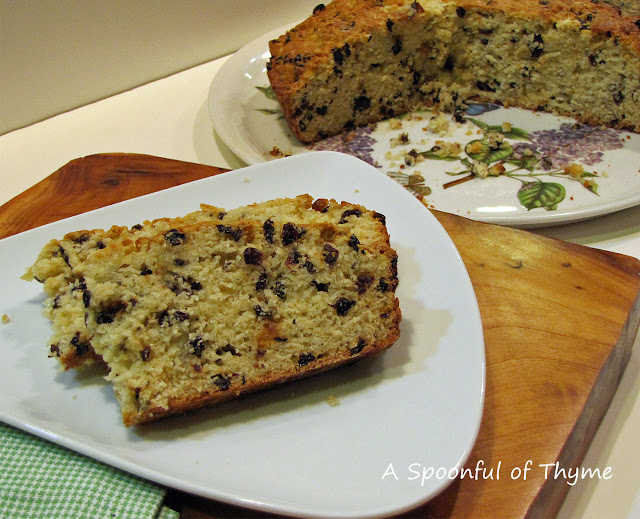 The bread was great.   It had a hint of sweetness, a hint of caraway, which I wasn't certain I would like....but combined with the currants...yum.)