I was first introduced to tamales by a former neighbor. Her family makes the absolute best tamales! For years, each Christmas evening our neighbors would come over with tamales and the most fabulous hot salsa. We had such a great time with them. Together we watched their boys and our daughters exchange gifts and grow into young adults. It was hard to believe that the years slipped by as they did.

As the years go by, times change. My neighbor lost her husband, we moved, all of the children went on to college, one son went to the academy and became a pilot in the Air Force, one daughter got married and moved...oh, times do change and much too quickly. My youngest daughter said, "Mom, we don't have tamales anymore." Come to think of it, we hadn't had tamales in a long time...guess I was going to have to learn how to do it.

Since most tamale making is a family affair along with festivities, I knew this was not a task to take on by myself. I asked my friends if anybody, who had made tamales, would teach me. Two gals made them with their family and yes, they were interested in getting together to make tamales. An "all call" went out and soon had a group of seven!

Angie directed the preparation. She used an old family recipe that she has modified over the years.

Three of us were to each get a pork shoulder or pork butt roast that weighed about 10 pounds. She said that we needed the fat so we were not to get a leaner cut of meat. She also said if there was a lot of fat to think in terms of what the yield would be with bone out and meat cleaned. I ended up with two roasts with bone weighing about 11 1/2 pounds total. I was to have the meat cooked and cleaned when we came together.

The Kitchen Gnome got to help. His job was to clean the pork that I had cooked, soak the corn husks, remove any silk that remained and keep the husks damp until we needed them. (Bless him.)

Festivities! We also needed libation-type festivities...a celebration of friends coming together to create something wonderful! We decided that the Cranberry Margarita recipe in the December Sunset Magazine was perfect. Let the wild rumpus begin!!

Preparing the Meat:
(This should be done a day or two before assembling the tamales.)

Place the roast in a crock pot. Cover the meat entirely with broth (use whatever amount you need to cover the meat). Add the onion, all cloves from a bulb of garlic, a quartered large onion and cumin. I cooked the meat overnight and into mid morning. The meat should fall apart (shred) easily.

When the meat is cooked remove it from the crock pot, keeping all juices. Clean the fat from the meat. Shred the meat and place in a large bowl.

The juice will be used to make the meat moist and the masa flavorful. Pour the juice through a sieve into a large bowl and place it in the refrigerator. Remove the fat solid that forms on the top before using the juices. 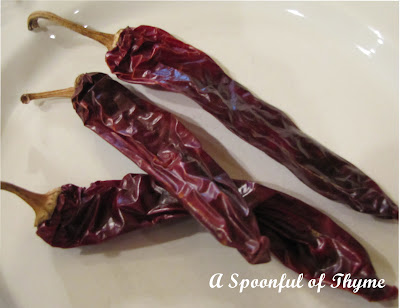 Fill a large pot 2/3 full with water. Place the chiles in the pot, add a quartered onion, fresh garlic and bring to a boil. Simmer for app. 20 minutes until they are soft. Let the chiles cool down in the pot for 1/2 hour. 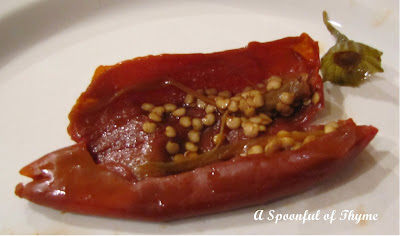 Take 8-10 chiles out at a time, remove stems (some seeds can be removed also if you want it to be more mild). Place them in a blender with about 1/4 cup of chili water (if it is bitter use broth or hot water instead). Add the onion and garlic from the pot; then add the cumin, oregano and salt. The spices are added to each batch that you blend. Blend for about a minute. Strain each batch of chili to remove seeds and skin. Using a large sieve and spoon work all the sauce through and dispose of the seeds and skin each time before straining the next batch. Taste test it, you may want to add a little minced garlic or it may taste a little bitter and need the addition of some of the broth instead of chili juice. Continue this process with all of the chiles. If the chili is too thick add some meat broth and stir well.

Just before assembling the tamales, place the meat in a large bowl, add the chili sauce little by little alternating with 1/2 to 1 cup of the meat broth, stir well. The meat mixture should be very moist, but not runny.

Soak in warm water for 1-2 hours. Clean, remove silk, and place in a large bowl (wide cut end facing down). Cover with a moist towel. 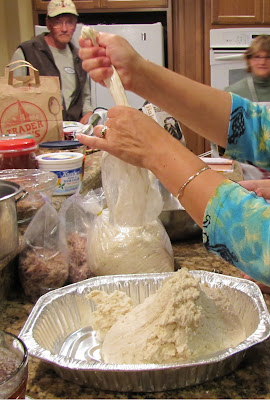 If the masa is cold, place the prepared masa in an extra large container (a disposable aluminum turkey roaster works great!) and cover with a paper towel. Let it sit out for 2-3 hours to get to room temperature before assembling tamales. 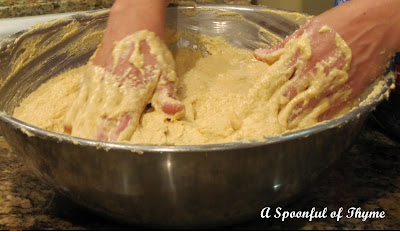 When the masa is at room temperature, add 1 cup of the meat broth to the masa, add the baking powder and salt, using your hands work all the ingredients in well. Continue adding the broth for moisture and flavor. Taste test for salt. Avoid making it slushy, the masa needs to be spreadable. 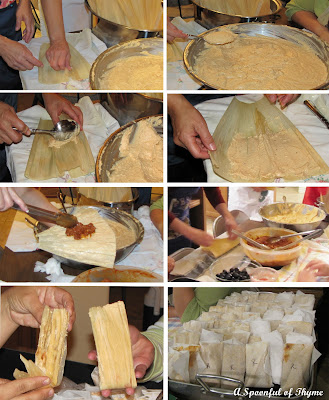 Place the smooth side of the corn husk facing up on an old kitchen towel. Have several damp paper towels at your disposal for wiping fingertips when necessary. If the husk is wet, pat it dry with a towel. Scoop approximately a tablespoon of the masa and place it in the middle of the corn husk on the smooth side. Spread the masa to the cut edge and one side completely, leaving the other edge without masa.

Add meat, olive and fold. Fold the side edge with the masa over the meat and olive. Fold the opposite side over. The bottom, narrow part, is folded last. Fold it upward. Wrap the tamale in deli paper (optional). Set completed tamales in a large pot or rectangular container until ready to cook or put in freezer bags to be refrigerated or frozen. Tamales can be frozen and cooked at a later time if desired. If not frozen, they should be cooked with two days.

Add 1 inch of water to a large pot. Place tamales on a metal steamer (tamales should not touch the water) inside the pot, putting the larger ones at the bottom. Cook them on medium low. Keep an eye on the water level. Additional water should be added as needed.

Check them for readiness by removing one from the pot. It needs to cool for 5 minutes. If the husk can be removed easily and the masa is not sticky, it is done. If the masa is sticky, return it to the pot and let the tamales cook for another 20 minutes. Keep checking them regularly.

Smaller tamales will cook more quickly and should be removed sooner from the pot. Uncooked tamales can be kept in the refrigerator for 1-2 days. Tamales that are cooked and refrigerated are good for up to six days.

We sampled just a few the day after we assembled the tamales. They were delicious. Some tamales can have a flat blah taste but the masa and meat in these was quite tasty!! More to come...Mexican cuisine tonight!
Labels: Beverages Chicken Main dish Mexican Cuisine Pork