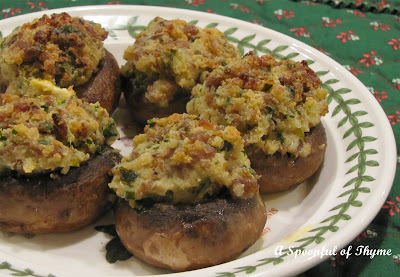 With all of the cooking that has occurred during the last month it was time to sit back and take a breather! How does one do that and still eat? I learned from a friend that sometimes a meal can just be a variety of "small plates" that are not labor intensive and do not demand hours in the kitchen.

Last night was a "small plate" night. What are "small plates"? In Spain they are called Tapas and in Greece they are known as Meze. They are not really appetizers served as a first course, they are tidbits or nibbles, served on small plates.

The Greek tradition of Meze comes from ancient Greece where it was believed that no guests should be welcomed or drinks served without a little nibble.

There are two theories surrounding the history of the Tapa. Spanish history states that an ill King Alfonso the 10th took small bites of food with wine between meals. When well, he decreed that no wine be served without a small bit of food. There is also the theory that the tradition could be based upon the farmers and workers who needed to take a small bit of food so that they could work until mealtime.

Basically, mezes and tapas are small bites that are consumed with great conversation and wine!

One of the small plates that I served last night was Ina Garten's Sausage Stuffed Mushrooms! They were delicious. The Kitchen Gnome gave them two thumbs up...he said he gets tired of mushrooms stuffed with cream cheese because they burn the roof of his mouth....okay. Actually, I think he likes these because of the sausage! What guy doesn't like sausage?

I prepared the mushrooms as part of the Barefoot Bloggers. They are a group of cooks and bakers who enjoy Ina Garten and her recipes. As a group, Ina Garten's (The Barefoot Contessa) recipes are tested and retested. On the 2nd and 4th Thursday of every month the Barefoot Bloggers post about their experiences preparing the recipes selected. Stop by and take a look at "what's cookin'" and join us!