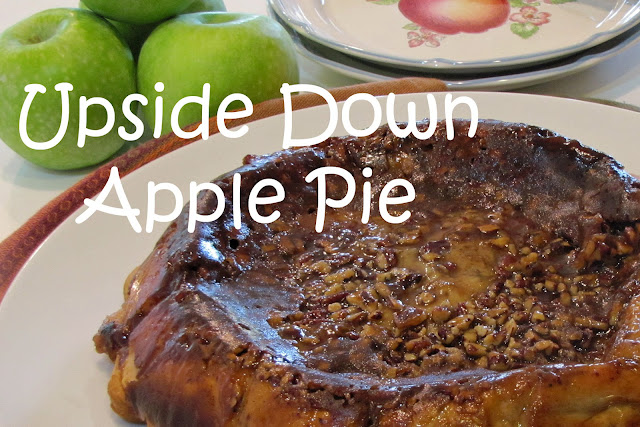 Everybody needs a contingency plan.  I knew that I was going to need one when I set out to make the Spiced Apple Pie.  As I mentioned in the earlier post, making pies is not something that I ever rush to do.  My pie crusts have had more fatal accidents than I care to mention.  Anytime something is fatal, it is best to avoid it!

But, being brave, I set out on the Crazy Cooking Challenge...I was going to make an Apple Pie....and, I had a contingency plan.

I knew when I saw the recipe for Upside Down Apple Pie at Cathy's blog, Noble Pig, that all would be well.  I would either have two yummy pies to eat or one accident and one yummy upside down pie to eat.  Success was in my future!

Coat a pie plate with nonstick cooking spray and line it with parchment paper. Coat the paper with cooking spray also.  (A regular pie plate works well here as there is not a lot of hangover for sealing the two crusts together when refrigerated pie crusts are used.) In a small bowl combine 4 Tbsp of melted butter, brown sugar and pecans. Mix well and spread evenly over the bottom of the pie plate, on top of the parchment. Place one of the crusts in the pie plate, pressing it firmly against the nut mixture and up the sides of the plate. Set aside.In a large bowl, combine granulated sugar, flour, cinnamon, nutmeg, allspice and the remaining 2 Tbsp of melted butter. Mix well. Add the apples in and toss gently to coat. Spoon into the pie crust.Place the second crust over the apple mixture. Trim and fold the edges together to seal and cut some slits in the top of the crust for venting. (All pies, even upside down ones need just a little sugar sprinkled  on top...be sure to brush the crust with some milk first.)
Bake 1 hour or until crust is golden brown. Be certain to place your pie plate on a baking sheet to catch any drips from the pie.  (There will be drips!) 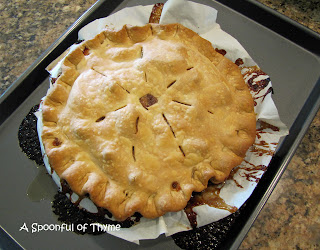 Let the pie cool for 5 minutes and then place a plate that is larger than the pie on top of it and flip it over. Use oven gloves as it will still be hot. Remove the pie plate and gently lift the paper. Allow to cool. Serve warm or at room temperature. 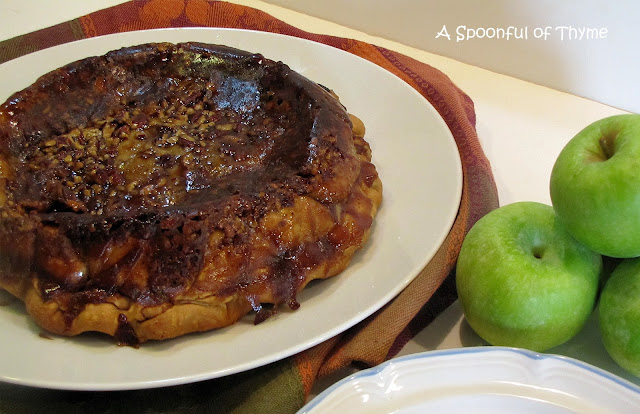 This was an absolutely wonderful pie!!  The caramel and nuts on the bottom/top had a little crunch and made it seem as though you were eating one of those large, heavenly cinnamon rolls that you get when you take a trip to the beach.  You know the kind...the ones you do not eat very often because you know that you would be eating two days worth of calories!!  Yep, those kind...  Well, this could be the substitute..still the wonderful flavor plus the bonus of apples!!

Delicious!!
What a contingency plan!!


I am participating in Foodie Friday hosted by Michael at Rattlebridge Farm.
Labels: apples dessert Pie