I am so far behind in my blogging...there is a reason that I haven't been able to sit at the computer for any length of time and I want to share the reason with you.... 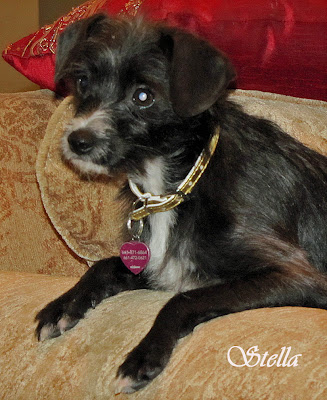 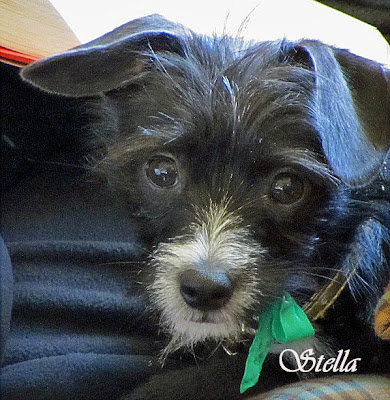 Stella needed a home and we could give her a good home so...we now have a puppy.  The foster home mom said that she was about a year old.  She sure acts like a whole lot of puppy.  While the Kitchen Gnome and I are being trained by the puppy...oops, while we are training the puppy, there hasn't been much time for blogging.  We have had Stella for five weeks, now, and she is a different young lady.  We still have more learning and training to do but we are pretty happy with her progress!

I had a puppy breather and spent the day New Year's Eve cooking.  It was so much fun to be back in the kitchen again!  While looking through old issues of Fine Cooking, I came across a recipe for Stilton, Apple and Leek Tart with a Spiced Whole-Wheat Crust.  My heart sang at the thought of blue cheese and apple!  Just what I had in mind to take as an appetizer New Year's Eve.

The recipe specified Stilton cheese...how is it different?  Stilton is an English blue cheese made from cow's milk.  It has very fine veins of mold in a radial pattern.  The pattern of these fine veins throughout the cheese, allow for even flavoring.

The Stilton, apple and leek flavor combination is amazing.  The only recommendation that I would make is to serve it after coming from the oven and it has cooled just a bit.  I think the flavors would be  appreciated more when it is warmer than room temperature. 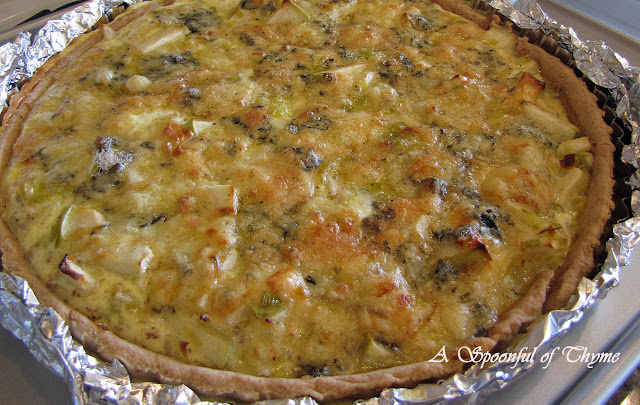 Make the tart shell:  In a medium bowl, stir the two flours, coriander, mace, cayenne, and salt.  By hand or using a food processor, cut the butter into the flour mixture until the butter bits resemble oatmeal.  Mix in just enough ice water to form a ball of dough (a Tbs at a time) be sparing.  Gently flatten the dough into a smooth disk about 1 1/2 inches thick.  Roll the dough on a lightly floured surface into a round about 1/8 inch thick.  Drape the dough over the rolling pin and lift it over a 10 or 11 inch fluted tart pan with a removable bottom.  Unroll it loosely over the pan and gently press the dough into the pan without stretching it.  Trim any excess dough from the rim of the pan.  Cover with plastic wrap and chill for at least an hour.

Make the filling:  Split the leek lengthwise into quarters and then cut crosswise into quarter slices.  Soak in cold water, swishing to loosen the dirt.  Scoop the leeks from the water and drain.

Heat the butter in a medium skillet; add the leeks and apples.  Cook over medium heat, stirring, until the leeks are brightly colored and the apples are softened, about 5 minutes.  Remove from the heat and let cool.

Lightly beat the eggs, half and half, salt, pepper, and nutmeg.

Fill and bake the tart:  Heat the oven to 300° F.  Cover the underside and edges of the tart pan with heavy-duty foil to prevent leaks and put the pan on a baking sheet.  Distribute the leeks and apples evenly over the tart shell.  Sprinkle the crumbled Stilton between the apples and leeks.  Pour the custard over the top.  Bake until the custard has just set in the middle, about 45 minutes.  Let cool to room temperature before serving.