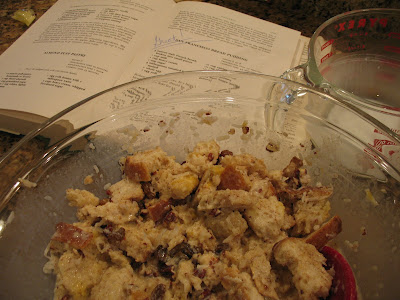 My mom used to make bread pudding for us. I loved it, especially with milk and sugar on it! When I saw how much stale bread was in the bread drawer, I decided to make bread pudding. I looked for a recipe that had a nice custard and also had ingredients that I loved. I wanted one that had a great sauce, too...oh, I still eat it with milk and sugar, but that is for breakfast! I needed a nice rum sauce to serve it as dessert.

My first stop was the Commander's Kitchen. I had eaten bread pudding at the Commander's Palace in New Orleans and it was wonderful. It was served with a Whiskey Sauce. That wasn't quite what I was trying to find. Next, was The Silver Palate Cookbook. As I compared, what I learned was that bread pudding is pretty basic. I wasn't certain what I was looking for but I knew I hadn't found it.

I pulled out my copy of San Francisco Encore and found a recipe that was a little different. It had raisins, coconut, pecans and a lemon rum sauce! That was worth mixing up! Prep time 10 minutes! I could go for that.

I had to adjust it along the way as I was out of a few ingredients...note to self: Next time, check the pantry and frig before starting! I used half and half instead of milk...how many calories can I add?....I also used golden raisins instead of the usual. 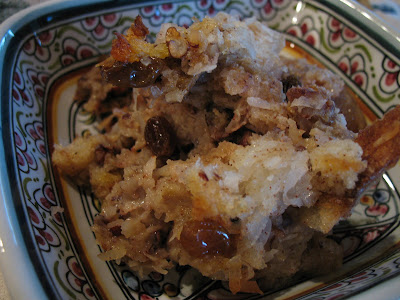 Preheat oven to 350 degrees. In a large bowl, combine all the ingredients: blend well. The mixture should be very moist. Pour into a buttered 11 X 7 inch baking dish. Bake for 45 minutes, or until set. Serve warm with Lemon Run Sauce. 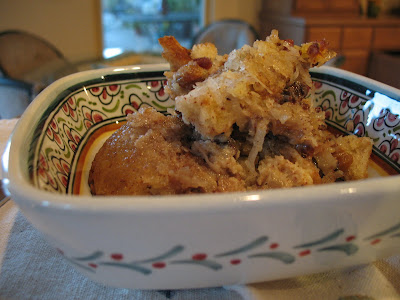 This was so quick to make. It is quite tasty and it satisfied my desire for bread pudding!
Labels: Bread cookbooks dessert pudding