What makes a Southwest Omelet? Fluffy eggs, ham, onion, green pepper, cheese and whatever else you like layered in that fluffy egg, that has been folded over.

What makes great nachos?  Layers of chips, chicken, beans, cheese, and fresh toppings like avocado, tomatoes, onion, cilantro, sour cream and pretty much whatever you like.

It seems that they have some type of meat, cheese, onion, and "whatever you like" in common....and, they are layered, so to speak.  So, in name only we had Southwest Breakfast Nachos for dinner! Taking the best of both dishes, along with whatever else, and putting them all together with a special sauce.

The chosen "whatever" was hashbrowns, there was meat, cheese, peppers, onions...well, you know how it goes. The nachos are built by layering the potatoes, special sauce, ham mixture, eggs and cheese.  Everything but the kitchen sink came together with a special sauce....They may not be beautiful, but they were mighty tasty.  In fact, tasty enough for dinner and then leftovers for breakfast! 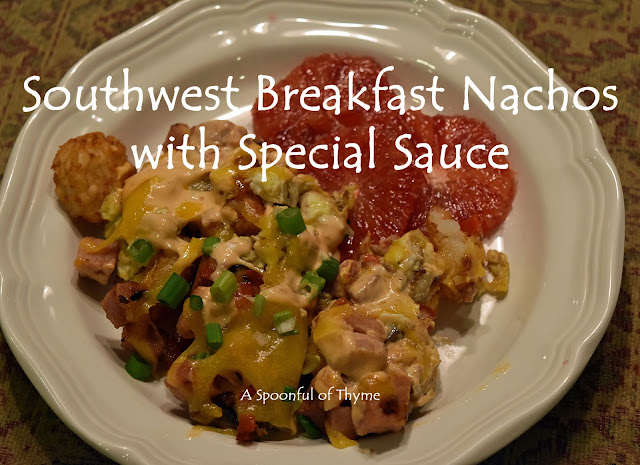 While the potatoes are baking, prepare the special sauce.  Whisk together the mayonnaise, Sriracha and garlic.  (Be sure to taste the sauce and adjust amount of Sriracha to your taste.)  Set the mixture aside.

Saute the diced ham in olive oil until it begins to brown; then, transfer the meat to a paper towel to drain and the place the ham into a medium size bowl.

In the same pan, add the pepper, onion, and mushrooms.  Cook the mixture until the liquid evaporates and the vegetables are tender.  Transfer the mixture to the bowl with the ham. Season with salt and pepper and stir to mix.

In a small bowl, whisk the eggs and milk.  Season with salt and pepper.  Heat the butter in a skillet over medium heat.  Add the eggs and cook until soft (slightly underdone to prevent their getting rubbery).  Transfer the eggs to a small bowl.

Build the nachos by placing half of the potatoes in a baking dish.  Ladle about one third of the special sauce over the potatoes.  Next, layer half of each of the ham mixture, the eggs and the cheese.  Bake the layer for about 3 minutes to melt the cheese.

Build another layer starting with the potatoes, another third of the special sauce, the remaining ham mixture, eggs and cheese.  Bake again until the cheese melts.

Remover from the oven and top with the remaining special sauce and garnish with the chopped green onions. 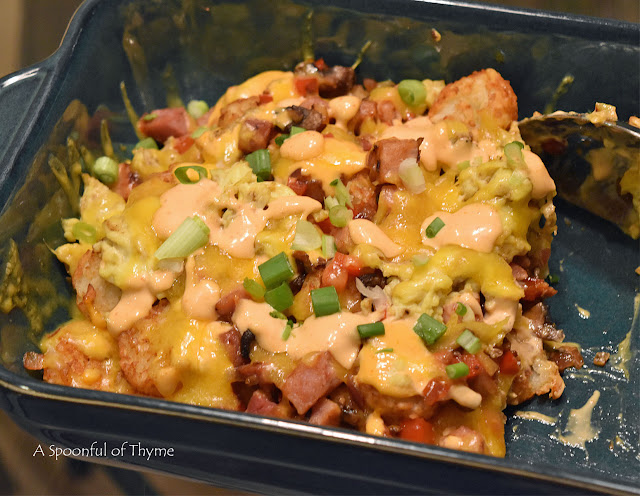 I am not certain that this can be called nachos...it is in layers, there is meat, there is cheese and sauce. It turned out to be a great dinner...and that sauce!!!  I can see this being repeated at our house.
Labels: Brunch Ham Main dish nacho Potato