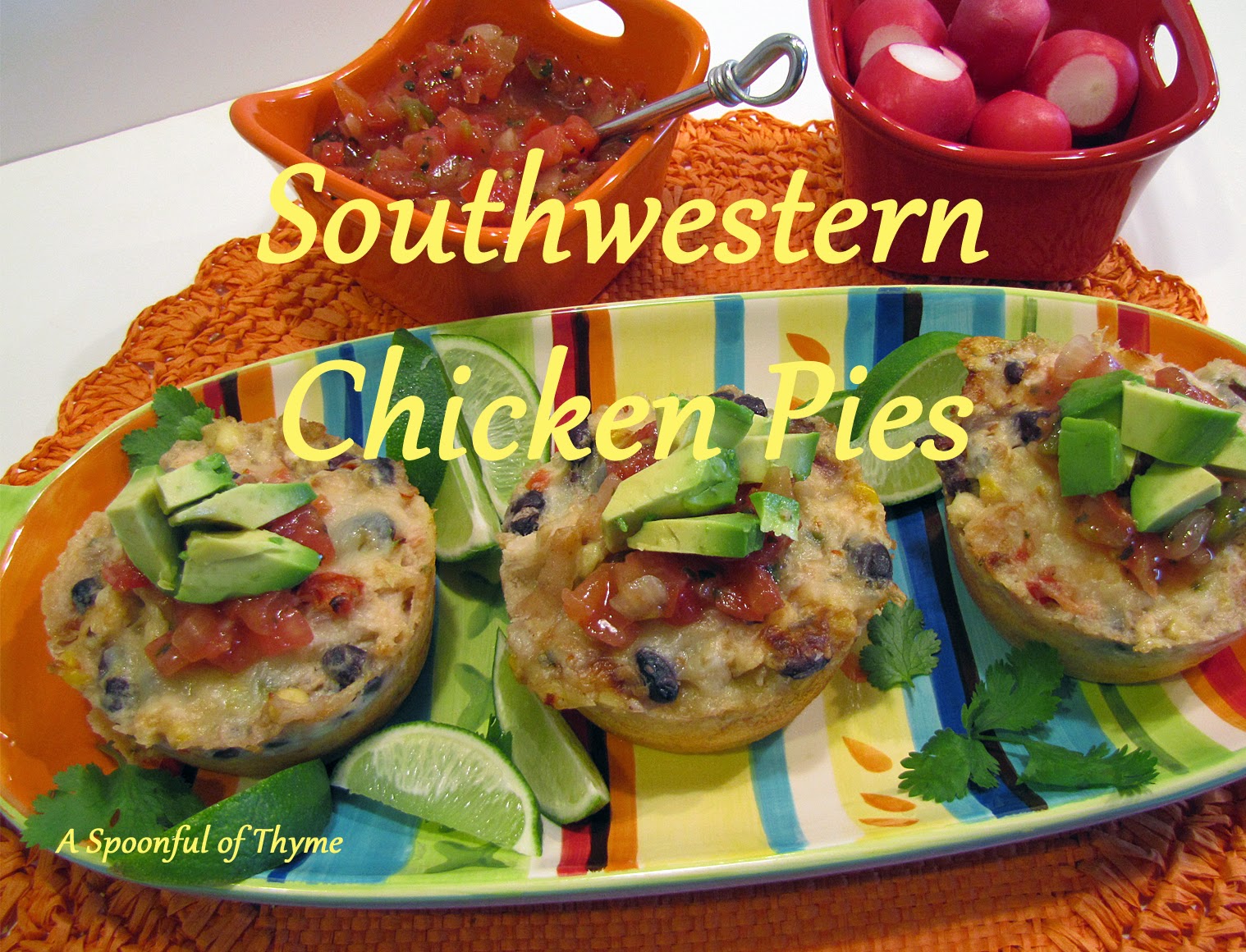 Remember being told that you should not go to the grocery store when you are hungry?  Over the years, I have learned that that is a true statement.  Recently, I just learned another new "ism"....Don't read a food magazine when you are hungry and have tabs and a marker in your hand!  The odds are that you will tab or highlight everything!

This was the case for me when I got the April issue of Cuisine at Home.  When I was finished going through the magazine and making the grocery list, all I could do was shake my head.  Maybe I should have eaten a handful of peanuts or something....that might have made me stop!   Instead I was true to myself.  I crossed off the homemade donuts even though I have never made donuts and would really like to have made them.  I crossed off the Irish Cream Cheesecake...that was sad....really sad, and I am not a real fan of cheesecake...but it looked amazing...

Instead, I decided to make these cute little individual Southwestern Chicken Pies with a Cornbread Crust.  It is like a dessert, isn't it?  There is a crust so it has got to be a faux dessert!  Ha!  Just to make me feel better, I had to buy a new pan.  I didn't own a giant-sized muffin pan... Who knows, I just might want to make these again...  Actually, I still don't have a giant pan...there is no way that I would be able to get 1 1/4 cups into each section...

There were fun to make and fun to eat!   I liked making these cute little guys.   It made me feel better...you know...they had a crust... 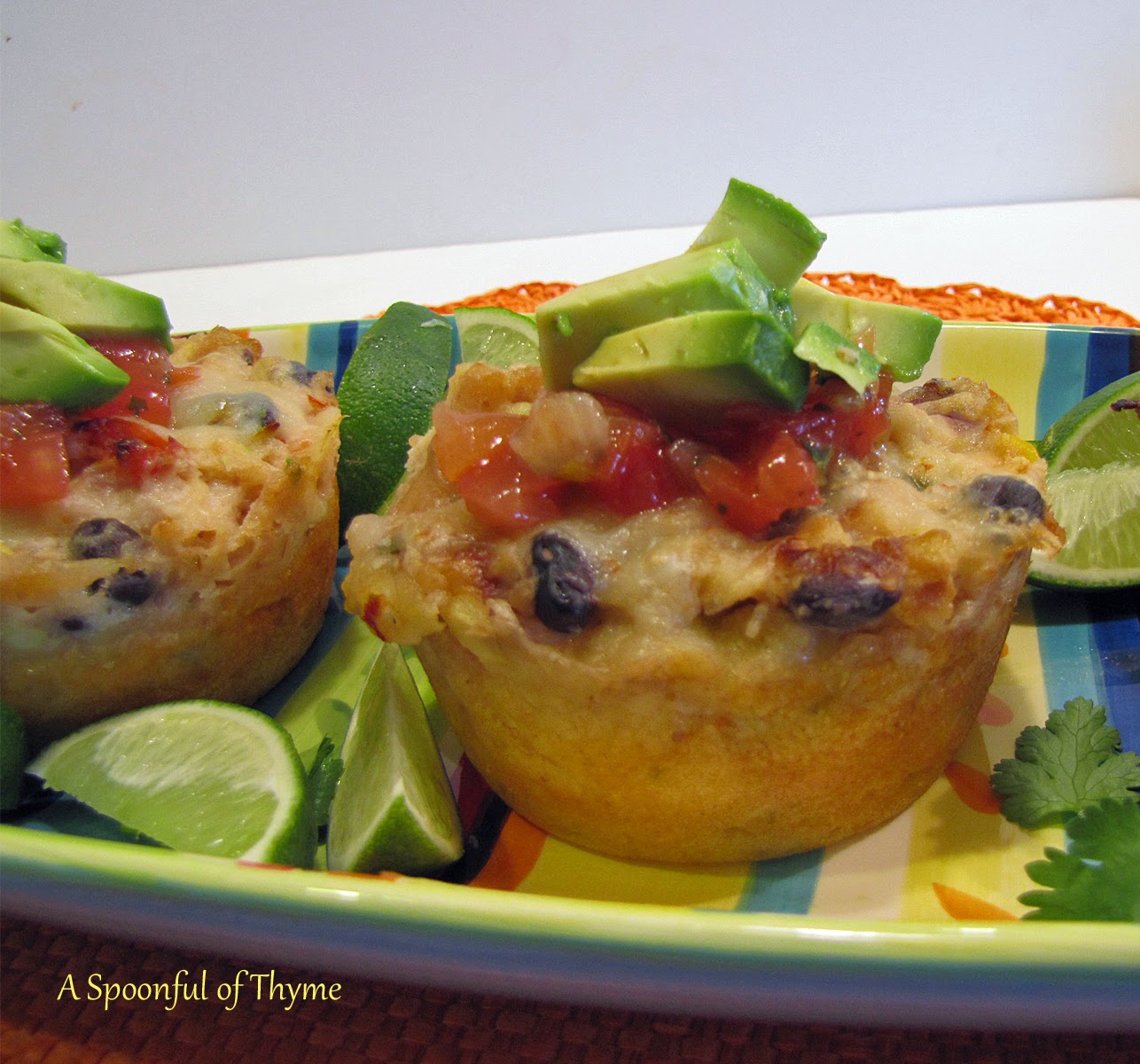 Yield:  6 servings
Preheat oven:  425° F. with the giant muffin pan or other oven-safe baking dish inside.

For the filling, sweat the first seven ingredients in a large saute pan over medium heat, about 5 minutes.

Combine the chicken stock and the sour cream.

Whisk 2 Tbsp flour into the vegetable mixture to coat, then stir in the chicken stock and sour cream mixture and cook until slightly thickened, about 5 minutes.  Stir in the chicken, 1 cup of the cheese and the lime juice; season with salt and pepper.

For the crust, whisk 3/4 cup flour, cornmeal, jalapeno, baking powder, 1/2 tsp salt, and lime zest in a bowl.  In another bowl, combine the milk, egg, and 1/4 cup oil.  Stir this mixture into the cornmeal mixture.

Scoop about 1/3 cup cornmeal batter into each section of the hot pan; bake for 5 minutes.  Remove from the oven and scoop 1/2 cup filling into the center of the cornbread in each section.  Bake for 20 minutes.  Sprinkle the remaining 1/2 cup cheese evenly over the tops of the pies and bake until the cheese melts, about 5 more minutes.  Remove from oven and run a knife around the edges to release the pies.  Serve the pies with the salsa, avocado and a sprinkling of cilantro with radishes on the side! 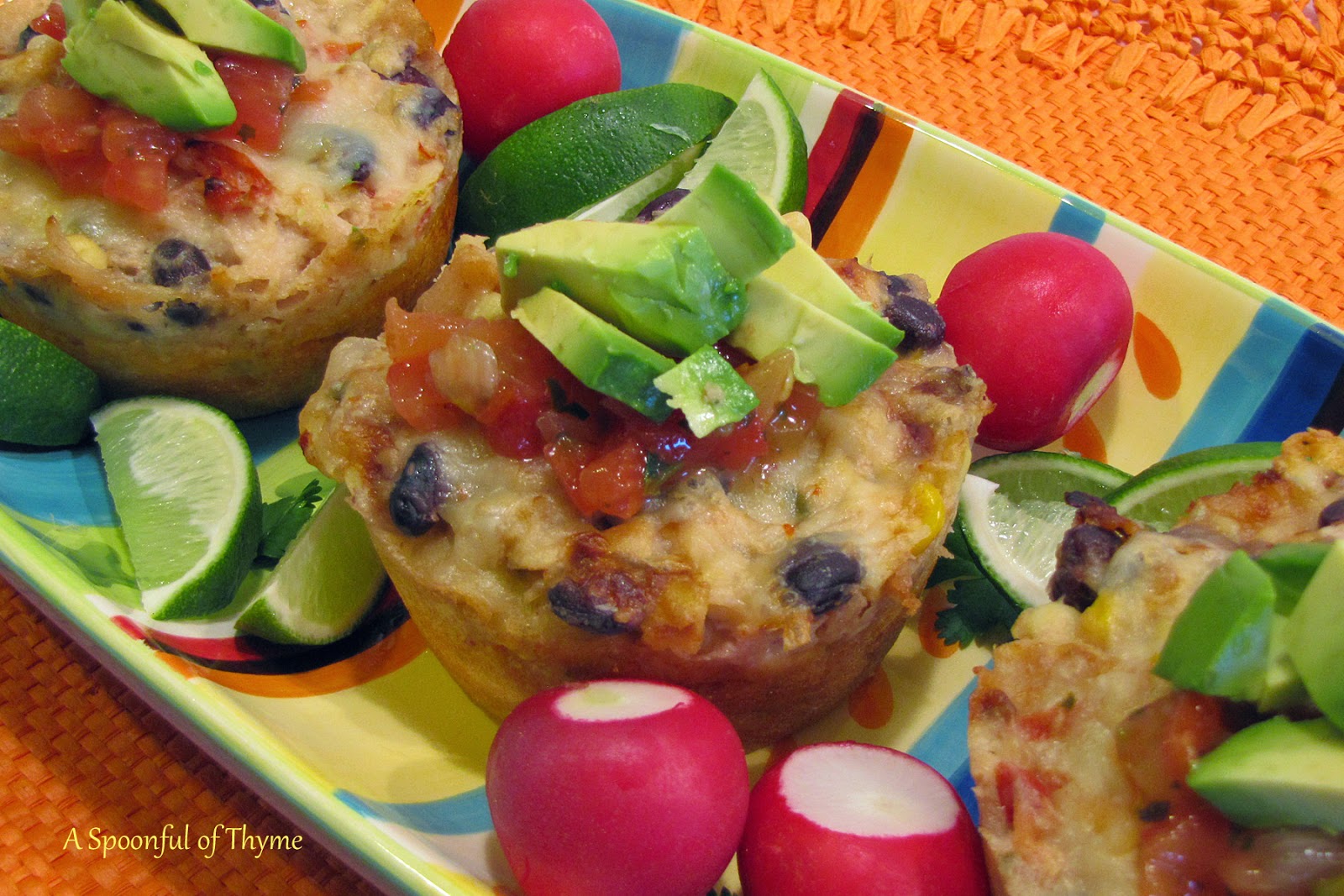 These were delicious little pies.  Watch the baking time if your baking container varies from the giant-size muffin pan!