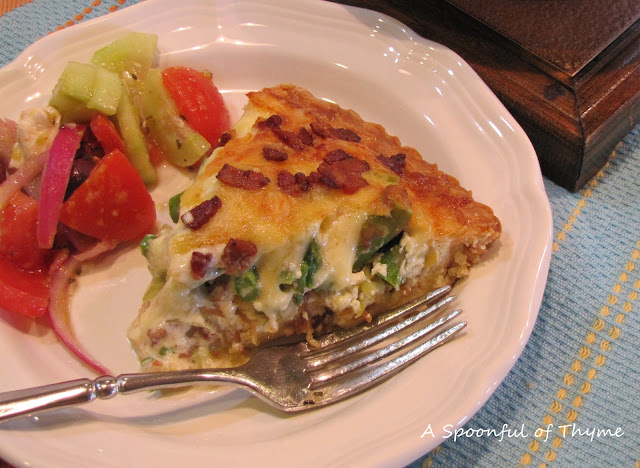 Mr. T went camping...too cold for me but he keeps telling me that he is tough.  After listening to his description of the three days, I know that I made the right decision:  stay home, work on genealogy and cook!

A quiche is not on Mr. T's told ten when it comes to dinner but I do enjoy a nice slice of quiche for dinner or breakfast...or whenever.  So, dinner for me, quiche!  This quiche did not disappoint.  It was a great combination...asparagus, leeks, bacon and Swiss cheese...plus, it was easy as pie, using a frozen deep-dish pie shell.

Fill a large pot with water, cover, and bring to a boil over high heat.

In a large skillet cook the bacon until crisp.  Remove the bacon from the pan and set aside.  Cook the leek in the pan drippings until tender.

Cook the asparagus in simmering water until  tender crisp.  Immediately plunge into a bowl of ice water to hold the color and stop the cooking.  Drain and cut into one-inch  pieces.

Place half of the bacon in the pie crust.  Top with the leeks, asparagus, and cheese.  Sprinkle the remaining bacon on top.

In a small bowl mix the eggs, half and half, salt, and pepper and pour over the pie.  Bake 40 to 45 minutes until a knife inserted in the center comes out clean.  Let cool a few minutes before serving.

Mr. T did have to admit to having a slice or two when he got home from his trip...and, he did agree, the quiche was tasty!!