Skip to main content
Labels
Posted by Kathy Walker May 10, 2012

It is so much fun to have a girls night out!  Last week we met at a local restaurant for dinner.  As we talked about the menu everybody seemed to be leaning toward Beef Stroganoff...really?  Beef Stroganoff?  That is so 1950s!  I do like it but I was thinking seafood.  The ladies said that they had had it before and it was too delicious to pass up.  They said that were trying to figure out what was in this sauce that made it special.  So...being up for a challenge...Beef Stroganoff for all four of us!

The first recipe for Beef Stroganoff appears in 1861 in Elena Molokhovet's classic Russian cookbook.  The dish consisted of beef cubes, mustard, bouillon, and a little sour cream.  There were no onions or mushrooms in the recipe.

By 1912, The recipe had spread throughout Russia and into China where tomato paste and onions were added. Before World War II, those immigrants brought the recipe to the United States where it included beef, onions, mushrooms and sour cream served over pasta or rice.  The popularity of the dish increased after WWII when United States servicemen brought several versions home.

The recipe spread to other countries but it was in the United Kingdom where Pubs served it in a creamy white wine sauce.

The ladies were right...it was delicious!  The sauce was creamy and very flavorful.   We decided that the secret ingredient was Marsala instead of white wine.  The quest:  Find a recipe that just might come close to having the same flavorful sauce. 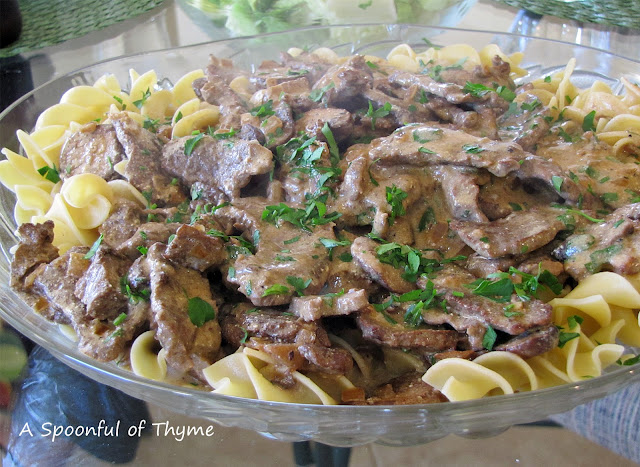 Beef Stroganoff
adapted from Chaos in the Kitchen

Heat a heavy skillet over medium high heat until hot.  Add 1 Tbsp butter.  As soon as it melts but before it browns, add half of the steak slices.  Toss then cook without stirring for a minute or two or until well browned on one side.  Sprinkle with salt and pepper.

Flip the steak pieces over and brown the other side, about one minute.  Remove steak to a warm plate.

Repeat the process with another tablespoon of butter and the remaining steak slices.  Remove steak to the warm plate.

Add one tablespoon of butter  to the pan.  When it has melted, add one half of the mushrooms.  Sprinkle with salt and pepper.  Stir until soft.  Remove mushrooms to the same plate as the steak.  Repeat the process with the remaining mushrooms.

Reduce the heat, and add 2 Tbsp butter.  Add the onions and garlic and saute until soft.

Add Marsala to deglaze the pan, scraping up the browned bits  in the pan.  Once the alcohol has cooked off, add sour cream and beef broth, stir and heat until smooth.

If the sauce seems too thin, you can prepare a paste of Marsala and 1 Tbsp of flour.  Add it back into the sauce and stir until thickened.  (If preferred, you can remove 1/4 cup of the sauce to mix with the flour and return that to the sauce, stirring to thicken.)

Add the steak and mushrooms to the sauce.  Stir and simmer until hot.  (Do not boil the sauce as it will cause the sour cream to separate.)

Taste and add salt and pepper .  Stir in parsley.  Serve over egg noodles. 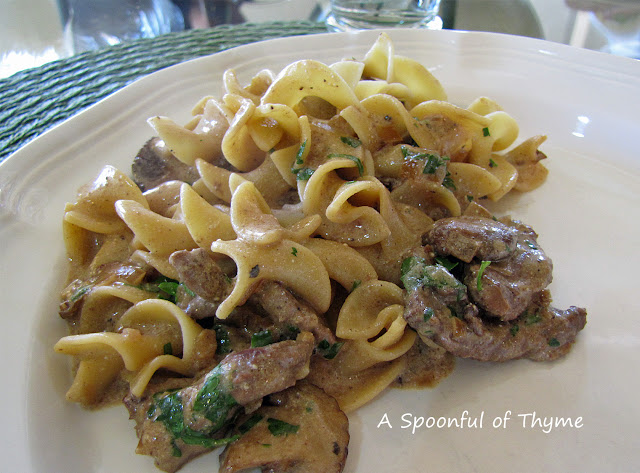 This was so tasty!  This recipe comes very close to replicating the meal we had last week...I am so happy that I had Beef Stroganoff for dinner!  I was also happy to have some leftover for lunch the next day.  Yum!

I am participating in Foodie Friday hosted by Michael at Rattlebridge Farm.  Take a look at all of the wonderful recipes being shared today.
Labels: Beef Foodie Friday Main dish pasta