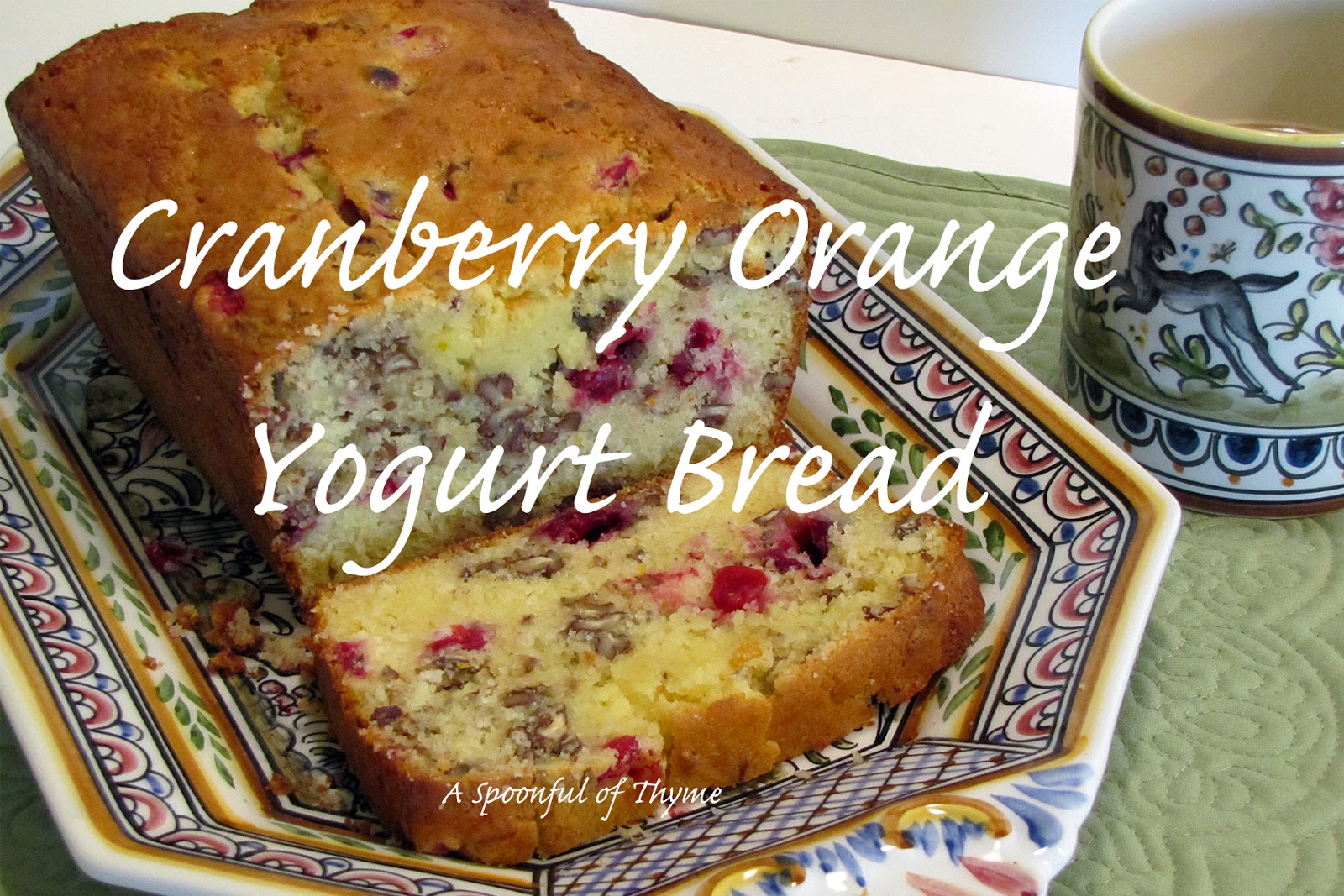 You are right....I skipped over pumpkin and went directly to cranberries!  Not that I don't love pumpkin, but because I was trying to create space in the freezer and because I had been wanting to make an orange cranberry bread.  For me it is nostalgic.  I was sorting through the recipe box....yes, I still have one of those....and I came across a recipe in my aunt's handwriting.  Upon a second look, I saw that it was her Cranberry Nut Bread.  What memories...  I had considered using her recipe but I had also just gotten some Boyajian Pure Citrus Oils, as recommended by Susan Bradley at The Luna Cafe, and I wanted to try out the Orange Oil and her recipe.  I also had some yogurt in the frig that needed to become something....SO......an early dose of cranberries it is, along with Susan's recipe that I had been saving.

You might want to try the citrus oils....I used the Orange Oil in the bread.  It is much more intense than orange extract, a lot is not needed. But, talk about a flavor booster, this is it!!  The bread was delicious....moist with a great orange flavor...just what I was hoping for.

Along the way I learned to pay strict attention to the dimensions of the loaf pan.  I actually have three different sizes lurking in the cupboard and the one I selected was a little larger than the recommended.  I realized along the way that I would need to adjust the baking time...thank goodness I was paying attention.

Sift the flour, baking powder, baking soda and salt into a medium bowl and set aside.

Whisk together the yogurt and orange in a small bowl and set aside.

Fit a paddle attachment to your mixer.  Cream the butter and sugar until pale and creamy, 3-5 minutes.

Add the eggs, beating until incorporated.  Add the orange zest and orange oil.  Mix to incorporate.

Using the slowest speed, add the flour mixture alternating with the yogurt and orange juice mixture. (The last addition should be the flour mixture.)  Do not over mix.  Finish incorporating by folding in the ingredients by hand with a large spatula.

Gently fold in the cranberries and pecans until well combined.  (Over mixing will cause the bread to not be tender.)

Immediately pour the batter into the prepared pan.  It should be no more than ¾ full.  Level the top of the bread with a spatula.  Bake for 55-65 minutes.  (Bread baked in a smaller pan will require less time.)  Susan recommends using a thin instant-read thermometer to check for doneness 180° F. as the usual wooden skewer will come out sticky at this temperature.

I used both methods.  As I mentioned my pan was a little larger so I was worrying it....my thermometer never reached 180° and the wooden skewer came out clean....so maybe worrying it is the key!  Maybe my thermometer has gotten "old"! 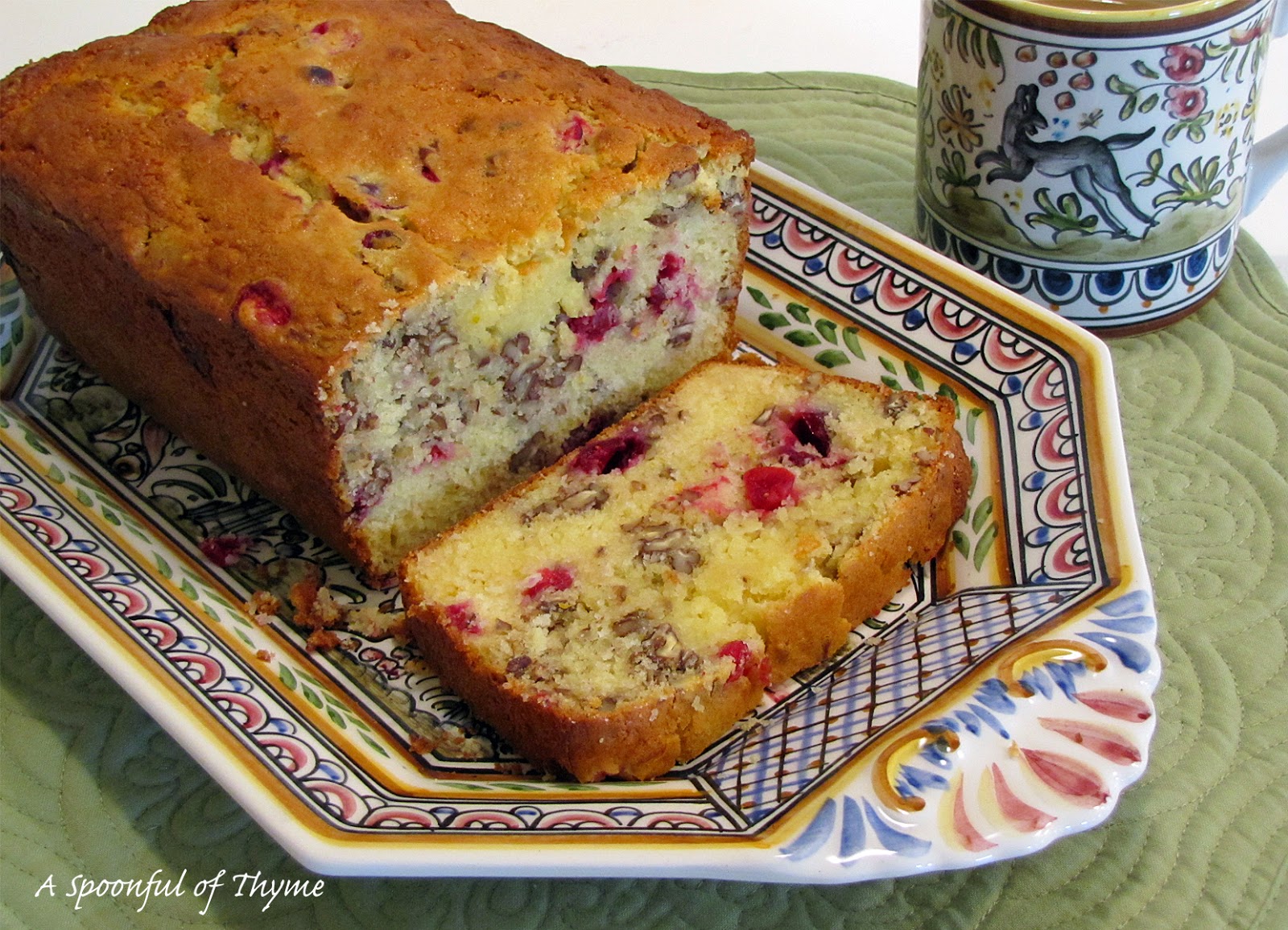 We enjoyed a slice of bread with our coffee in the morning...it was really tasty.  I think it will find its way to Thanksgiving breakfast, too.

You will definitely want to visit Susan's blog.  Not only does she post some amazing recipes, she also posts great information.  For the fall you can find an apple primer as well as an apple cider primer. Whatever the season, The Luna Cafe is a great read!

I am sharing today at Full Plate Thursday hosted by Miz Helen's Country Cottage, Foodie Friday hosted by Michael at Rattlebridge Farm and Weekend Bites at Simple Living and Eating.