I promised that my next post would be the Lechon Asado or Cuban Grilled Pork that Mr. T grilled to be used as one of the layers in Cubano Sliders...a miniature version of the Traditional Cuban Sandwich...that were so tasty.  We promptly left on vacation after that post and I have not had internet for two weeks!  I am amazed at how dependent I have become on the internet....what did I do before wifi?  "smile"

Anyway, as I mentioned we left for vacation so the photo is severely lacking...while I was running the last of the errands, Mr. T shredded the pork and sealed it up...no pictures except for a large piece of pork and the pieces on the sandwich..  Oh well.

The key to the grilled Cuban pork focuses on one main ingredient:  Seville orange juice.  This juice is more tart or sour than sweet.  Finding it can be a challenge....but, one can easily substitute a mixture of regular orange juice and lime juice to get the same tart flavor. 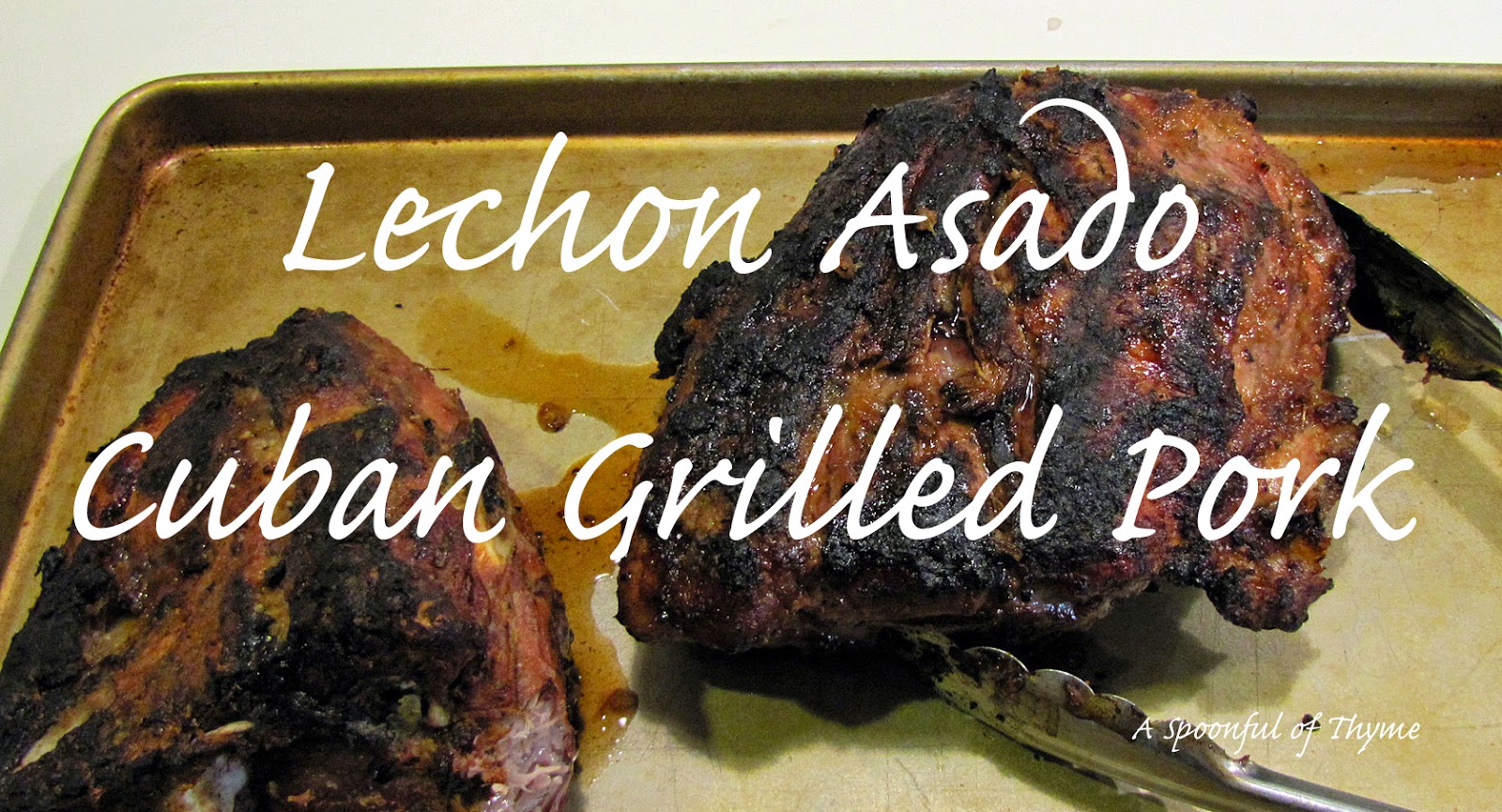 Prepare the marinade by mixing all ingredients in a bowl.  Allow to sit for 10 minutes.

Using a along thin knife to make deep gashes all over the flesh.  Generously season the outside of the pork with salt.  Place the pork in a large bowl and pour the marinade over the pork, spreading the onion rings over the top.

Cover with plastic wrap and refrigerate for at least one hour or up to 24 hours. (We prepared the pork and marinated overnight.)

Basting Sauce
Remove the pork from the marinade and place it on a baking sheet, set aside.  Transfer the marinade to a saucepan, add the onions and bring to a boil for about two minutes.  Remove from the heat and allow to cool.  Place the the cooled marinade and onions into a blender and puree until smooth. The puree is used as a basting sauce during grilling.

Grilling
When the pork has reached room temperature, you are ready to grill.

Heat the grill to 550° F. and close the lid.  Wait at least 15 minutes before lowering the temperature to 300° F.  Oil the grill grates with a vegetable oil-soaked paper towel.  (Use tongs to hold the paper towel so you do not get burned.)

If your cut of pork has skin still attached, begin grilling with the skin side up, away from the direct heat.

Grill the pork about 2 1/2 hours total.  Turn the meat over one quarter of the way through the cooking time and again at halfway, continue turning until the  cooking time has lapsed.  The pork is ready when the internal temperature reaches 150° F. on the grill.  It will continue to cook when it is off the heat, raising the temperature to 160° F.

Using two forks, shred the pork or if prefered, cut into thin slices.


Mr. T and I thought the pork had a great flavor and intend to make it again....only not just before leaving on vacation!   I can think of a few ways to use the leftovers and want to give them a try....I did made a few wraps for the road....delicious!!

We are still on vacation but have found our way to Seattle to visit family....and reconnect on the internet!!