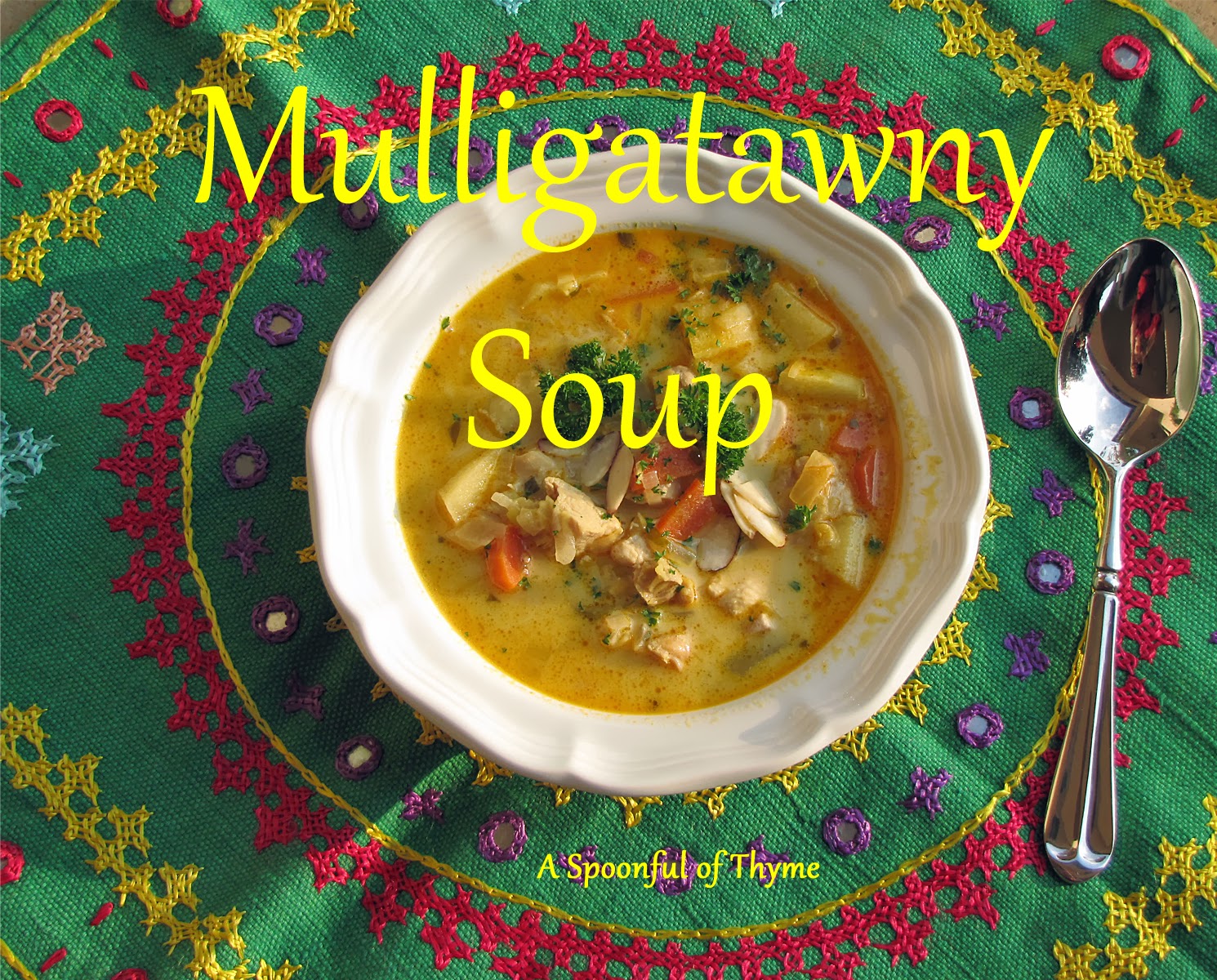 Soup was never part of Indian cooking until the British brought their love of it to India during their years of power and influence, from the late-19th century to the mid-20th century.  As the two cultures came together, the Indian cook was charged with making the soup that the British wanted served with their meals.  At the same time, many upper-class Indian households adopted British customs in numerous ways and soup became a familiar dish served in Indian households.

The South Indian cook merged the Indian dish, rasam, which was a watery broth of lentils and ground spices, with vegetables and meat to create a satisfying soup. Thus, an Anglicized version of  "pepper water" was created.  Milagu means pepper and thanni means water...put together you get Mulligatawny or "pepper water", a rich curried soup originally made with peppers.

Over time the recipe has changed to suit differing tastes in Western cultures.  While peppers may not always be included on the ingredient list and yogurt may be substituted for coconut milk, the recipe most often includes chicken stock, onion, celery, apples and almonds.  Cooks can prepare a mild curry soup, or adjust the spiciness of the dish by using peppers or additional spices! 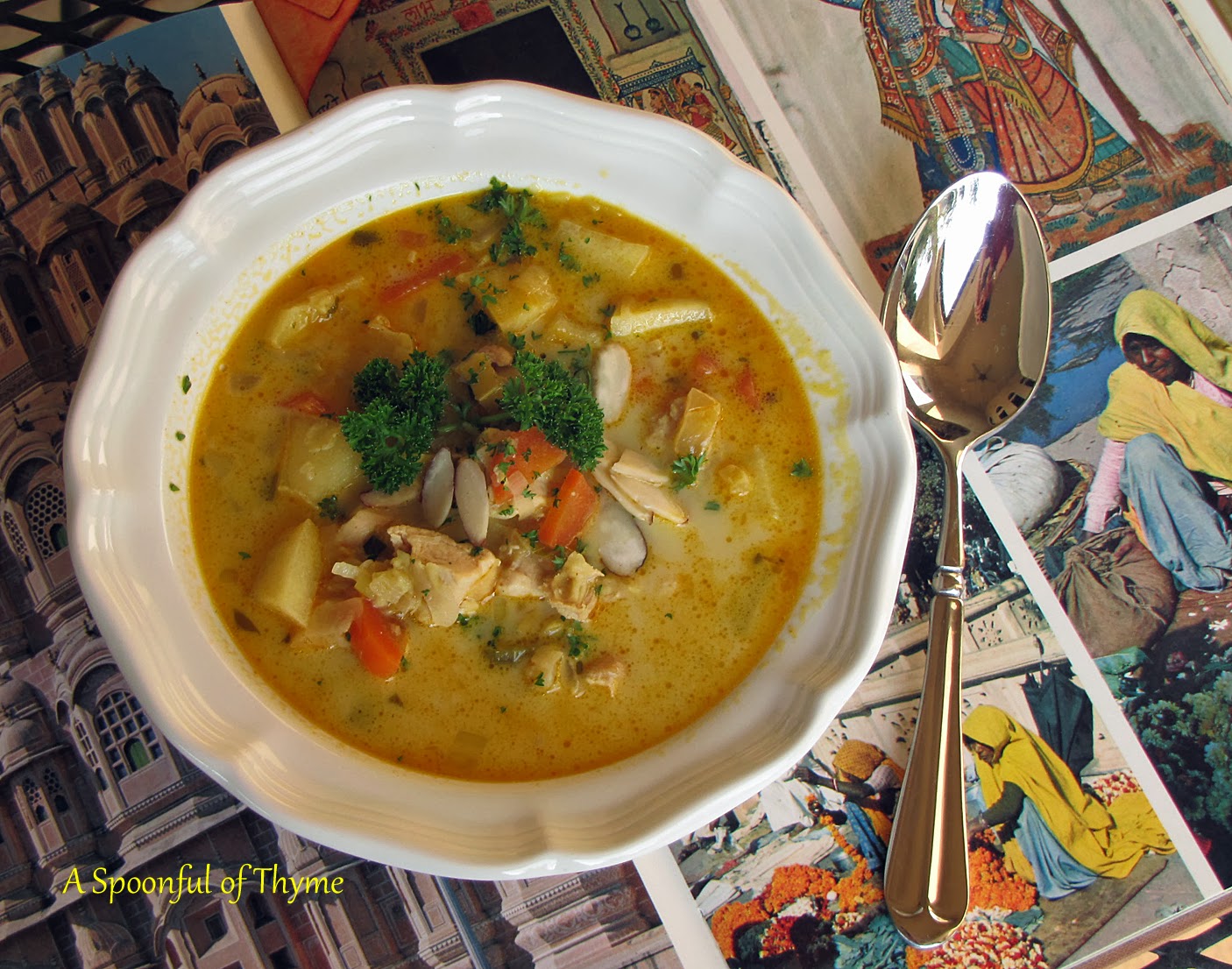 Combine garlic and spices in a small bowl.

Melt butter in a Dutch oven over medium high heat.  Salt and pepper the chicken and in batches saute until lightly browned.  Remove chicken to a plate.

Remove all but 2 tablespoons of the fat from the Dutch oven.  Add the celery, onions, carrots and leek as well as the garlic and spice mixture and blend well.  Add one cup of the chicken stock and cook over low heat, stirring frequently, until vegetables are tender.

Add the chicken to the vegetables in the Dutch oven.  Add the remaining chicken stock and the lentils. Cover and simmer 30 minutes.  Skim off any foam that rises to the surface.

Blend in the yogurt and apples.  Stir and simmer for 10 minutes.

(Remove any grease, if necessary.)

Stir in the lemon juice and blend in the cream.

Taste and adjust seasonings and spices as preferred. 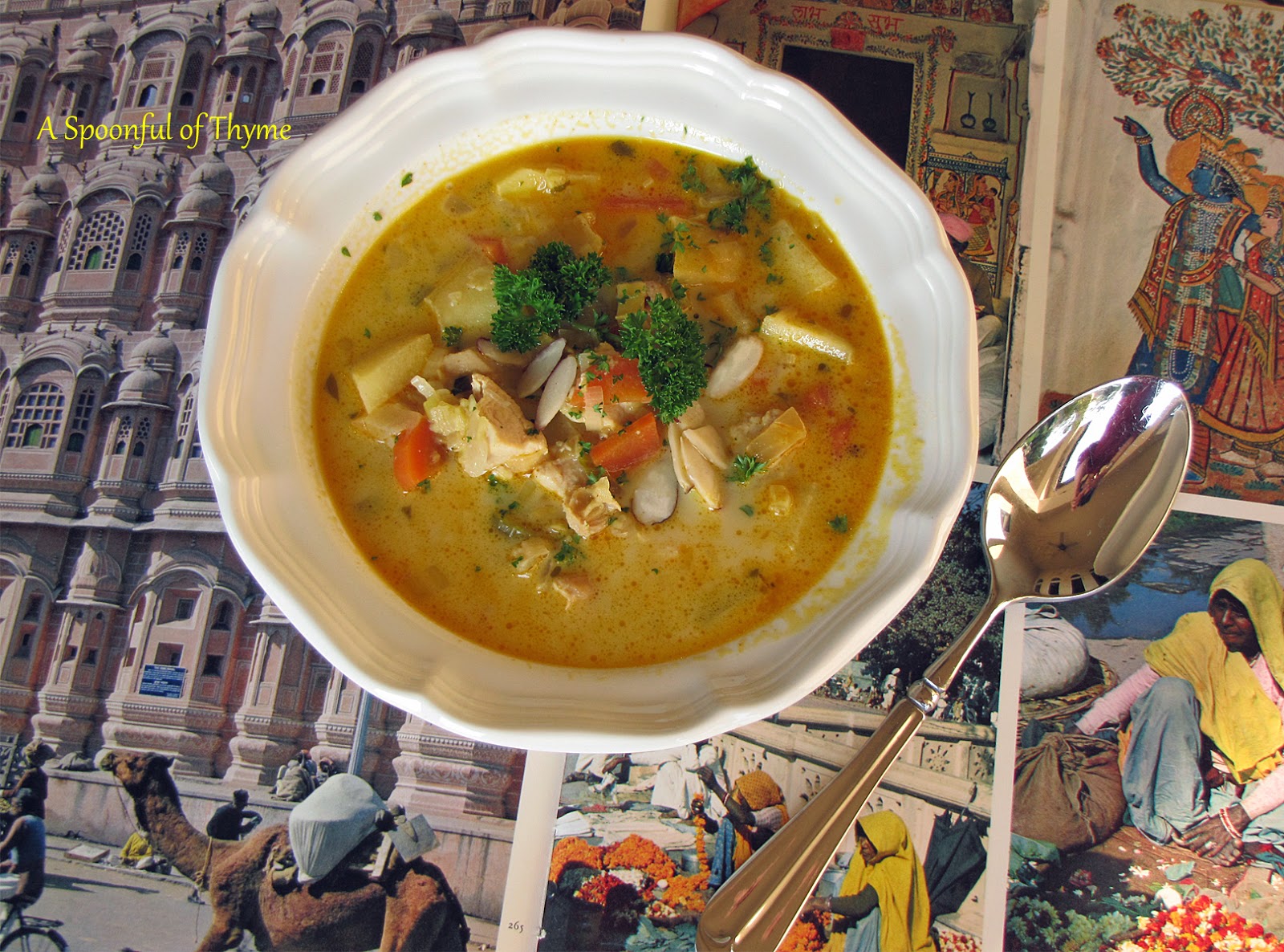 So what motivated me to make Mulligatawny Soup?   Besides the fact that I have missed Indian Cuisine and lately seem to be on a roll using Indian spices, it was The Secret Recipe Club and the blog I was assigned, Cafe Lynnylu.  Lynne's blog is not unfamiliar to me as I was assigned her blog in June.  How fun to come back and get to find another recipe to share.  Lynne is an avid cook, a food and lifestyle photographer and loves to travel. Her blog is evidence of her career and her interests...gorgeous photography and recipe after recipe!  I loved having the problem of selecting just one recipe..and this time it was her Mulligatawny Soup.

I was not disappointed!  The soup was wonderful and very close to what I remember eating when I was in India many years ago.   I did adjust the spices by adding some spicy smoked paprika and reduced the amount of garlic, I threw in an extra carrot...mine were small... and I substituted lentils for rice.   The flavors were fantastic with just the right amount of spiciness for us.