When one is told that the recipe is "World Famous" and that you have to try it, how can you argue?  That is what happened when my SIL said he was making this amazing banana pudding.  The two of us do enjoy cooking together so why wouldn't I make it also.  We can compare notes long-distance it is just 1,000 miles!

All I knew about banana pudding was that my mom would make it and we had Vanilla Wafers with it.  Maybe she was a trend setter and didn't know it!  What I do know is that this was a super tasty pudding and it makes a lot...there are only two of us...we needed at least six more people...but there is a pandemic so why not pig out on banana pudding!

The recipe comes from the Magnolia Bakery in New York City.  It has become a pop-culture phenomenon according to the Today Show.  It has "the" spot for sweets in "Sex in the City" and has been seen in other popular TV shows and movies. 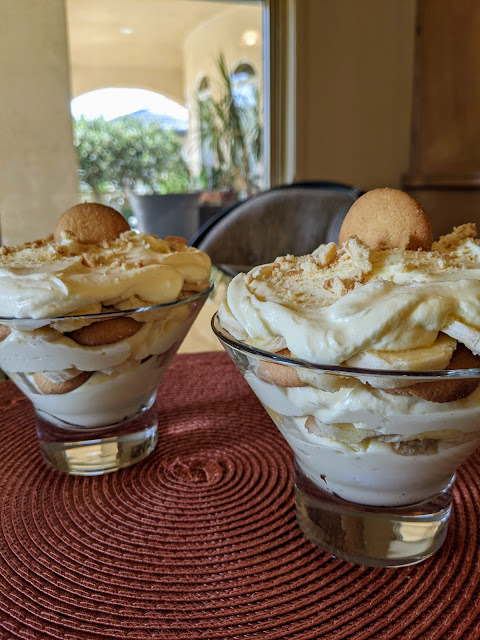 World Famous Banana Pudding
from Magnolia Bakery
Yield:  A Lot!
1 14oz can sweetened condensed milk
1 1/2 cups ice cold water
1 (3.4 oz) package Jell-O Vanilla Pudding Mix
3 cups heavy cream
1 (11 oz) box Nabisco Nilla Wafers
4-5 ripe bananas, peeled and sliced
Crunch about six of the Nilla Wafers and set aside. This should be chunky and not fine.)
Mix together the sweetened condensed milk and ice cold water in a medium-size bowl.  In a separate bowl, put in the pudding mix and slowly mix in the liquid mixture, until the lumps disappear and it is smooth, about a minute or two.  Cover and refrigerate for at least an hour or overnight, until it is firm.
Whip the heavy cream until it starts to thicken, then increase the speed and whip until stiff peaks form.
Add the pudding mixture to the whipped cream and whisk until there are no streaks of pudding in the mixture.
In a trifle or large glass bowl, spread one quarter of the pudding across the bottom. Make a layer using about 1/3 of the cookies.  Cover the cookies with a layer of banana slices.  Continue the layering process until complete ending with pudding.  Garnish the top with the crunched wafers and a few whole ones.  Cover the bowl with plastic wrap and refrigerate for four to six hours.  Serve the dessert within twelve hours of being prepared.
Individual serving bowls may be used and are prepared in the same manner.
PRINTABLE RECIPE 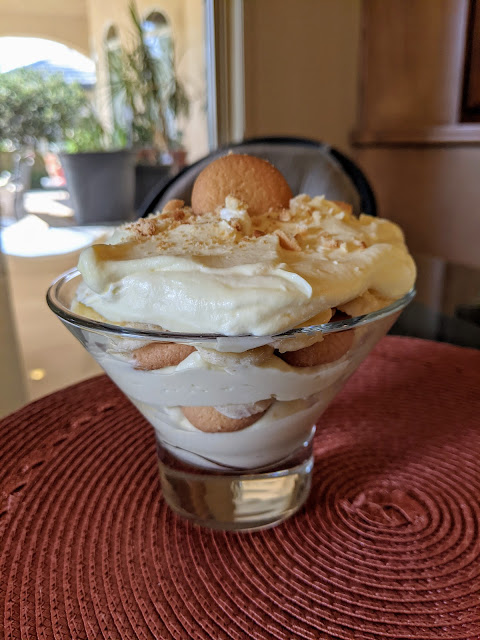 Definitely a make again dessert!  It truly brought back memories of my mom's creation.  I know this recipe is a little different from what she did but I will always remember the banana pudding and wafers!