I must admit that I was challenged by this month's Saturday Soup Swapper theme.  For the life of me I could not associate a soup with a specific memory.....that is, a soup that I hadn't already posted.  In fact, I was close to crying out "uncle" and waiting for January.

But then, Terry got sick....really sick...the ugly kind that seems to be going around right now and makes you miserable for a few days. This afternoon he was feeling pretty good and was a tiny bit hungry.  Then I remembered...his mom always made him potato soup when he was recovering from the flu.  He said potato soup always got him back on the road again.  So, I borrowed Terry's memory and suggested that I make potato soup for dinner.

The last time he was sick and I made potato soup for him I might have gotten a little too creative for a sensitive tummy.  I added a bit of beer....  (stop laughing)  Yes, it was a dumb thing to do.  I, myself, cannot believe that I did that.  It was not welcomed.  It was suggested that I make plain potato soup.

Remembering that plain potato soup was the memory....I asked if the thought of adding bacon bothered him...well, of course not, bacon is good anytime....  So for dinner tonight we had Baked Potato Soup!  It was super.  I don't believe that I will be waiting until he gets sick to make this again.  It was that good!  Each man was for himself when it came to the garnish.  Yes, I wanted the cheese, bacon and green onion and a little dollop of sour cream...why not, it is baked potato soup! 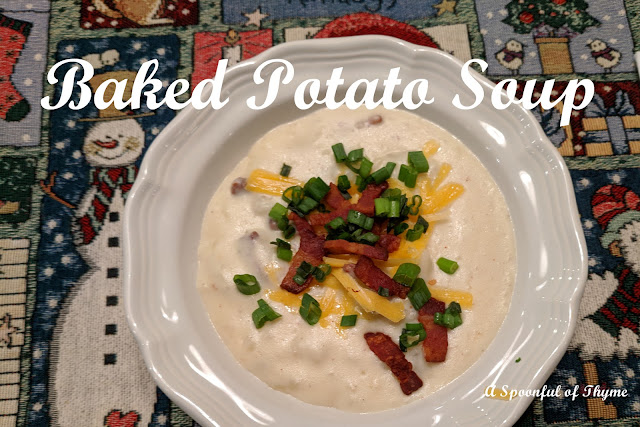 Bake the potatoes in the microwave per the directions for your microwave.  When finished set aside.

Cook the bacon lardons in a Dutch oven over medium heat, until crisp.  Remove the bacon from the pan to paper towels, leave the drippings in the pan.

Add the flour to the drippings and stir to combine.  Cook until the flour and the fat combine, about 1 minute.  Pour in the milk while whisking to incorporate.  Cook the mixture over medium heat until it bubbles and has thickened.  Stir frequently to prevent the mixture from sticking.

Remove the skin from the potatoes and roughly chop.  Add them to the milk mixture.  Mash the chunks with the back of a wooden spoon, leaving just a few chunks.

To the mixture add the bacon (leave out a tablespoon or two for garnish), 1 cup of the grated cheese, season with salt and pepper.  Stir until the cheese has melted.  Remove from heat.

Ladle the soup into bowls, sprinkle with cheese, bacon bits, chopped chives and a dollop of sour cream as desired. 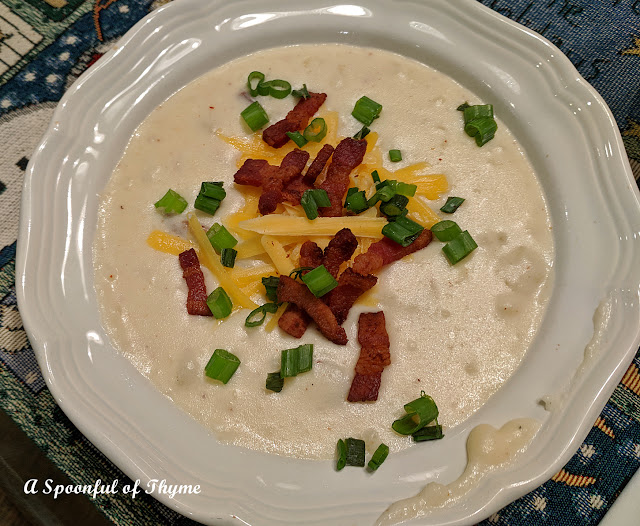 Thanks for the Memories is hosted by Wendy of A Day in the Life on the Farm.  Thank you for stretching the brain this month! It was a delicious bowl of soup!