You know how sometimes things just click.  That is I the way I felt when I received a weekly menu planning email from Lea Ann at Cooking on the Ranch.  I was immediately motivated to hit the kitchen.  That said I was also still trying to kick the bug that descended when we came home from Spain.  But, planning and list making I could do!  The cooking would come....

The first recipe I settled on was the Shrimp Burritos Con Queso.  Who doesn't love a burrito now and then?  And, these burritos were stuffed with shrimp in a bit of creamy cheese sauce packed with red pepper, onion, Hatch green chile, tomatillo....well, you get the idea....and then baked with a a bit more cheese sauce on top.  These were totally heaven!!  As Lea Ann says, "Don't let the long list of ingredients scare you away."  These are so worth it!!

If you have never taken time to visit Lea Ann, put it on your to do list!  Lea Ann has some amazing recipes...I love perusing her blog! 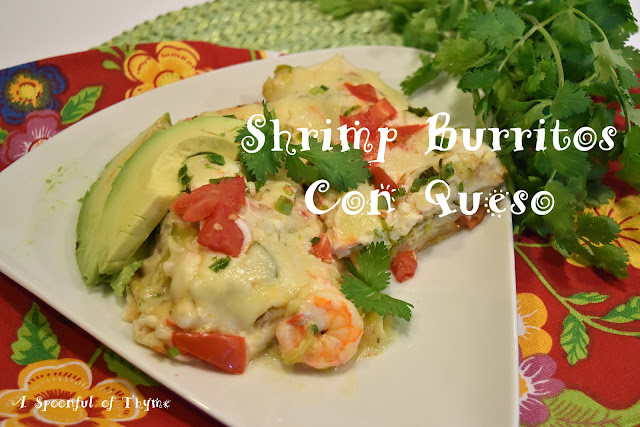 Shrimp Burritos Con Queso
adapted from Cooking on the Ranch

In a saucepan heat 1 tablespoon of olive oil over medium heat.  Add the red bell pepper, onion, chile peppers, tomatillo, zucchini, and oregano.  Cook until the vegetables are tender, about 5 minutes. Add the garlic and cook until fragrant.  Add the salt, pepper and cayenne.

In a small bowl, combine the flour and water whisking to blend.  Add this to the bell pepper mixture. Stir.  Stir in the milk until well blended.  Reduce the heat and simmer until slightly thickened.  This should take about 3 minutes.  Add 1/2 cup of the grated jack cheese and stir until it has melted. Remove the pan from the heat and stir in the sour cream.

Heat the remaining tablespoon of olive oil in a skillet over medium heat.  Add the shrimp and 1/2 cup green onions.  Stir until the shrimp just turn pink, about 2 minutes.

Lay out the flour tortillas and fill with equally with the shrimp mixture.  Roll the burritos tightly and place them seam side down in the prepared baking dish.  Spoon the remaining cheesy bell pepper mixture over the top of the burritos.

Cover with foil.  Bake for 30 to 40 minutes or until heated through.  Remove from the oven and top with the remaining 1/2 cup of jack cheese, 1/4 cup green onions and the remaining tomatoes.
Serve immediately with fresh avocado slices and a sprinkling of cilantro leaves, if desired. 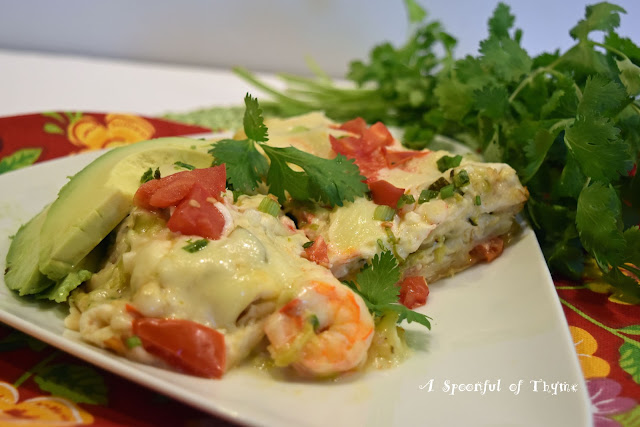