When it comes to enchiladas, I must admit that Enchiladas Suizas are my favorite.  Enchiladas Suizas are chicken enchiladas in a cheesy, creamy tomatillo sauce.  The best ones have just a bit of "bite" to them.  You may recognize the green sauce made from tomatillos and serranos as the one used in Salsa Verde.  It is close but doesn't pack the "big" punch that Salsa Verde can have.

The August/September 2012 issue of Saveur Magazine featured these enchiladas and the restaurant where they originated in 1950, Sanborn's cafe in Mexico City.  I have never been there but when I mentioned this recipe, my friend, Angie, said that she and her husband had eaten there and that the Enchiladas Suizas were delicious. Knowing that, I knew that it was time for me to make this spicy dish.  We were not disappointed.  I can see these appearing for many more dinners! 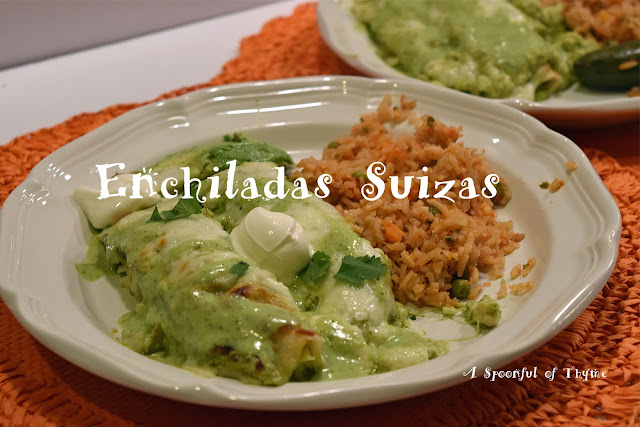 Transfer them to a blender along with the cilantro, sour cream, cumin seeds, garlic, poblanos and 1 cup of boiling water.  Season with salt and pepper.  Puree until smooth.  Set the sauce aside.

Place the chicken in a medium-size bowl.  Add 1 cup of the enchilada sauce.  Toss until the chicken is evenly coated.  Set aside.

Heat the oil in a 12-inch skillet over medium-high heat.  Using tongs, place a tortilla into the hot oil. Fry the tortilla in the oil until it is pliable, about 1 minute.  Transfer the tortillas to a baking sheet with paper towels to absorb excess oil.  When drained, move the tortillas to a work surface.  Divide the chicken mixture between the tortillas and roll them tightly around the chicken.  Pour about 1 cup of enchilada sauce in the bottom of a 9-inch X 13-inch baking dish.  Place the rolled tortillas in the dish, seam side down.  Create one row down the middle of the dish.  Pour the remaining enchilada sauce over the enchiladas.  Cover the enchiladas evenly with the shredded cheese.

In the preheated oven, bake the enchiladas until the sauce is bubbling and the cheese has melted, about 25 minutes.  Remove from the oven and allow to cool for 10 minutes before serving.

Note:  The recipe makes quite a bit of sauce.  I did not add all of the remaining sauce to the baking dish.  I added a substantial amount but I didn't want the enchiladas to be swimming!  (My preference.)

I served the enchiladas with Mexican Red Rice, Arroz Rojo.  It was the perfect accompaniment!