At our house when I don't feel like cooking....when I am at a loss as to what I should prepare....I usually turn to breakfast for dinner.  I love a big breakfast but it is way too much food for me in the morning so moving breakfast to dinner takes care of the craving and I don't feel as though I "had to cook!"

I hate to say it, but, when I got my Secret Recipe Club assignment, I wasn't really feeling as though I wanted to cook. That is nothing against my blog assignment, it was a reflection of my level of energy at that moment in time.  And, yes, I had the whole month, but I also knew we had to eat dinner so on this day, I went directly to the Breakfast section of my assigned blog, The Tasty Cheapskate maintained by Jean.

Jean says that she didn't grow up cooking even though her mom was a cost-conscious cook and always prepared meals for the family.   Jean said that "whole foods" were lost on her and that she only ate foods that were fat free.  Today, she cooks and prepares healthy foods while maintaining the cost-consciousness that she learned from her mom.

As I perused the breakfast options I was almost swayed by the German Pancakes and the Healthy Pumpkin Muffins but I was looking for a protein dish.  Refocusing, I considered the Swiss Egg Bake, and the Potato, Bacon and Cheddar Egg Bake....both would have been fine but Mr. T. was "hungry" so I opted to go with the egg bake that had bacon and potato!

As it turned out the recipe Jean made was an adaptation of Ina Garten's Omelet for Two in Barefoot Contessa At Home.  I have a small library of Ina's cookbooks and always enjoy her recipes...so, I was ready to give Jean's recipe a try....with a few minor adjustments.  I prefer to use onion sparingly in dishes.  To me, it can be overpowering.  Mr. T., also, really likes bacon....really likes bacon....as in "Don't skimp on the bacon!"  Naturally, I increased the amount. 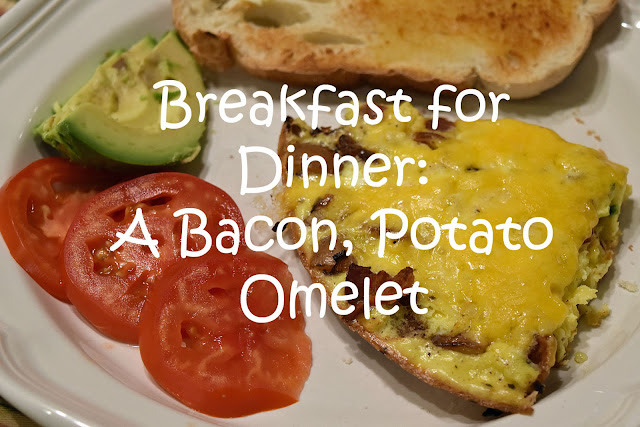 Breakfast for Dinner:  A Bacon, Potato Omelet!
adapted from Jean at The Tasty Cheapskate
and, Barefoot Contessa at Home by Ina Garten

In a medium bowl, beat the eggs, milk, salt and pepper.  Stir in the scallions and the diced cheese. When the potato is cooked, add the bacon to the pan and pour over the egg mixture.  Place the pan in the oven for 15 minutes, until the eggs puff up and are almost cooked in the center.

Sprinkle the grated cheddar on top of the omelet and return it to the oven for another minute.  Serve directly from the pan.

Note:   The onion cooked much faster than the potato.  I have adjusted the preparation process to allow the potatoes to cook a little prior to adding the onion. 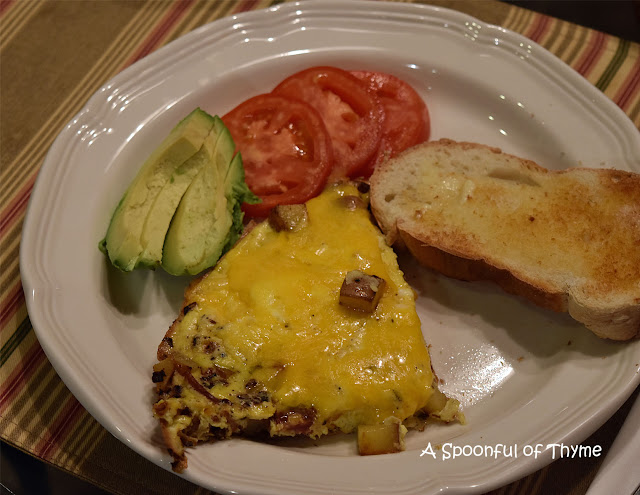 This was a tasty omelet and guess what?  We are having breakfast for dinner tonight...a repeat!