Skip to main content
Labels
Posted by Kathy Walker May 10, 2015 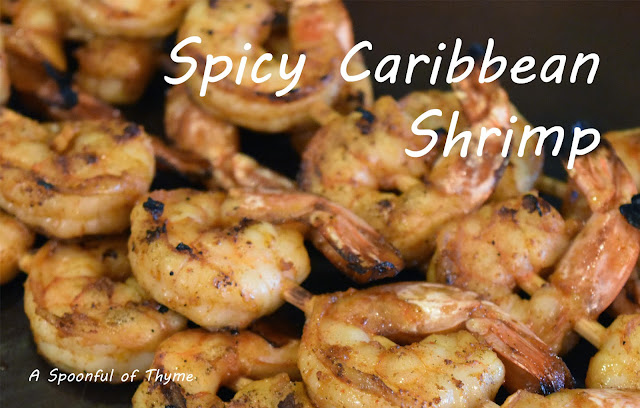 Sometimes there is a reason that we do what we do.  For example, this month I found a recipe the first day I received my Secret Recipe Club assignment, Corey's blog, Learning Patience. There was a bag of shrimp in the freezer so I figured, "Why delay?" We had planned to have shrimp that night anyway, so, Spicy Caribbean Shrimp became the main course.  Besides, I wanted time to try out the other tantalizing recipes that I had found, such as Shrimp, Avocado and Tomato Salad and Asparagus, Mushroom and Artichoke Strata.  I determined that I was going to spend the month cooking yummy things and then choose one for the SRC post.

But then...you know the phrase, "The best laid plans.....?" It's the one by Scottish poet, Robert Burns, "The best laid schemes o' mice an' men / Gang aft a-gley." Well, that's what happened.  "The best-laid plans of mice and men often go awry."  Today we most often think of those words in relationship to John Steinbeck who coined the phrase in his work, Of Mice and Men. It became very real for us recently.

As I said, that is exactly what happened.  The mister and I made the shrimp, I took a few pictures and didn't think about it again.  Then, I went to Seattle to do some granddaughter sitting and everything went awry! While I was gone, Terry got very sick and after five days, ended up in the hospital. The chain of events got worse for him as the infection was resistant to the medications he was given. After bringing in an infectious disease specialist, another treatment protocol was determined, he quickly responded, and he is recovering at home.....very weak and doing lots of resting.

It was at that point the I got the reminder about the SRC post.  Thank goodness for reminders.  And, while I didn't get to "cook yummy things all month and choose one..."  I feel very thankful that I was an early bird and prepared the dish right away.  I am also confident about the Spicy Caribbean Shrimp that we made. It was delicious...and we agreed that it was even more flavorful the second day.  We did change the preparation method.  We allowed the shrimp to sit in the marinade for about 15-20 minutes and then Terry put the shrimp on skewers and popped them onto the barbecue.  I made a Caribbean rice to accompany the shrimp and the meal was quite tasty! 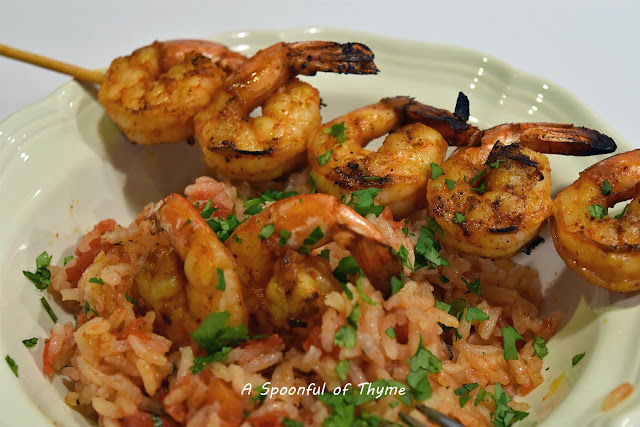 Rinse the shrimp and pat dry.  If the shrimp is frozen, be certain to thaw it first.

Bring out the skillet OR, heat up the grill.

Skillet Method:  Heat the remaining one tablespoon of oil in a large skillet.  Remove the shrimp from the bowl and cook in the skillet a minute or two until done (They are done when they become opaque.)  Sprinkle with salt while cooking.

When the shrimp are cooked, remove them from the pan, toss with lime juice and sprinkle with chopped cilantro!

Grill Method:  Remove the shrimp from the marinade and place on skewers.  Sprinkle with salt. Grill the shrimp 1-2 minutes, turn and grill an additional 30 seconds to a minute. They will become opaque and firm when they are ready.  Watch them closely being careful to not overcook the shrimp.

Remove the shrimp from the grill and lay the skewers on a platter. Squeeze fresh lime juice over the shrimp and sprinkle with chopped cilantro.

Both of us enjoy Caribbean food so trying this recipe was a no-brainer for us.  I found the subtle flavor of the coconut very nice.  While the spices used in the dish were flavorful and spicy-hot, we did not think the shrimp was too hot.  It was fun to give this recipe a try and see where it would take us....I imagined tropical beaches with palm trees swaying and refreshing drinks with little umbrellas! It was a pleasant journey.

Corey at Learning Patience does just that....journey....she and her husband are quite adventurous and after their first year of married life, they decided to experience the world.  They moved to Trinidad and then to London where they currently reside....oh, and they travel everywhere in-between at every opportunity. Corey's blog is all about cooking, running and traveling. Her adventures are many with some cooking along the way...one must eat, you know!