Skip to main content
Labels
Posted by Kathy Walker May 11, 2014

When I was growing up German Cucumber Salad aka Marinated Cucumbers aka Gurkensalat was a regular part of our meals during the summer, when cucumbers were in abundance.  I always looked forward to this fresh and crunchy, sweet and tangy dish. 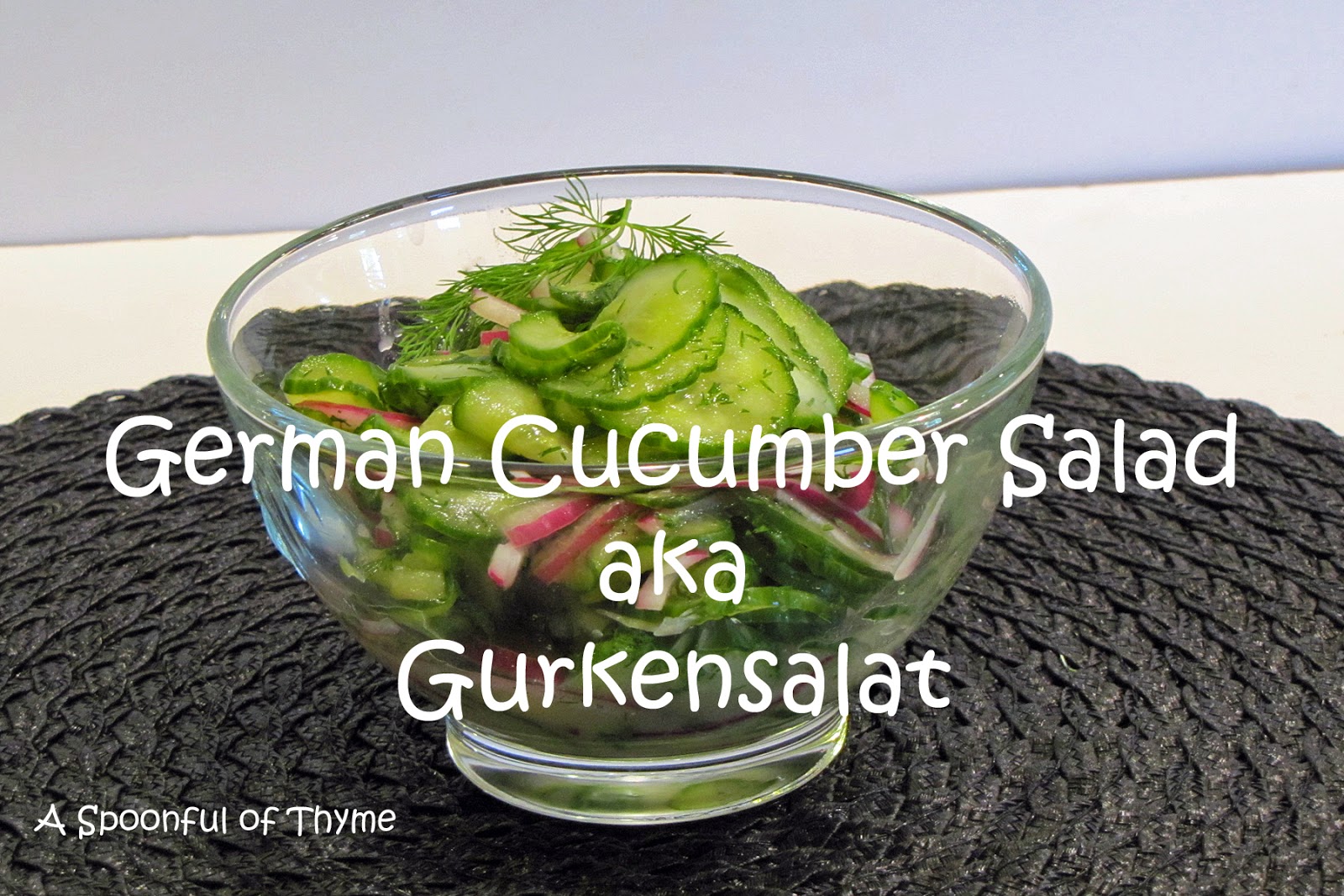 Wash, the cucumber but do not peel (unless it is your preference).  Slice the cucumber very thin using a mandolin or food processor.  It is very important that the slices be very thin as it enhances the flavor and the delicate texture of the salad.

After the cucumbers are sliced, place them in a bowl or colander.  Mix in the salt.  Allow the cucumbers to sit for at least two hours. This draws out the water assuring that your salad will not have a diluted vinegar dressing!!  Using a paper towel, gently pat the cucumbers dry.

Thinly slice the red onion.  You may separate the onion into rings or slice each piece in half and then separate.  Add the onions to the bowl with the cucumbers.

Add the vinegar, sugar and mustard to a small bowl.  Stir until the sugar dissolves.  Add the dill, salt and ground pepper to the dressing.  Pour the dressing over the cucumbers and onions.

Chill for one hour before serving.

Note:
I would use a taste as you go method as everybody has a different palate when it comes to a vinegar and sugar dressing!

If you would like a creamy gurkensalat, drain the chilled mixture and stir in about a quarter cup of sour cream or yogurt. Serve garnished with a bit of fresh dill.

This was so much fun to make and brought back so many memories....I have no idea why I waited so long to once again enjoy this wonderful accompaniment to my meal!  Thank you, Angela for the motivation and memories! 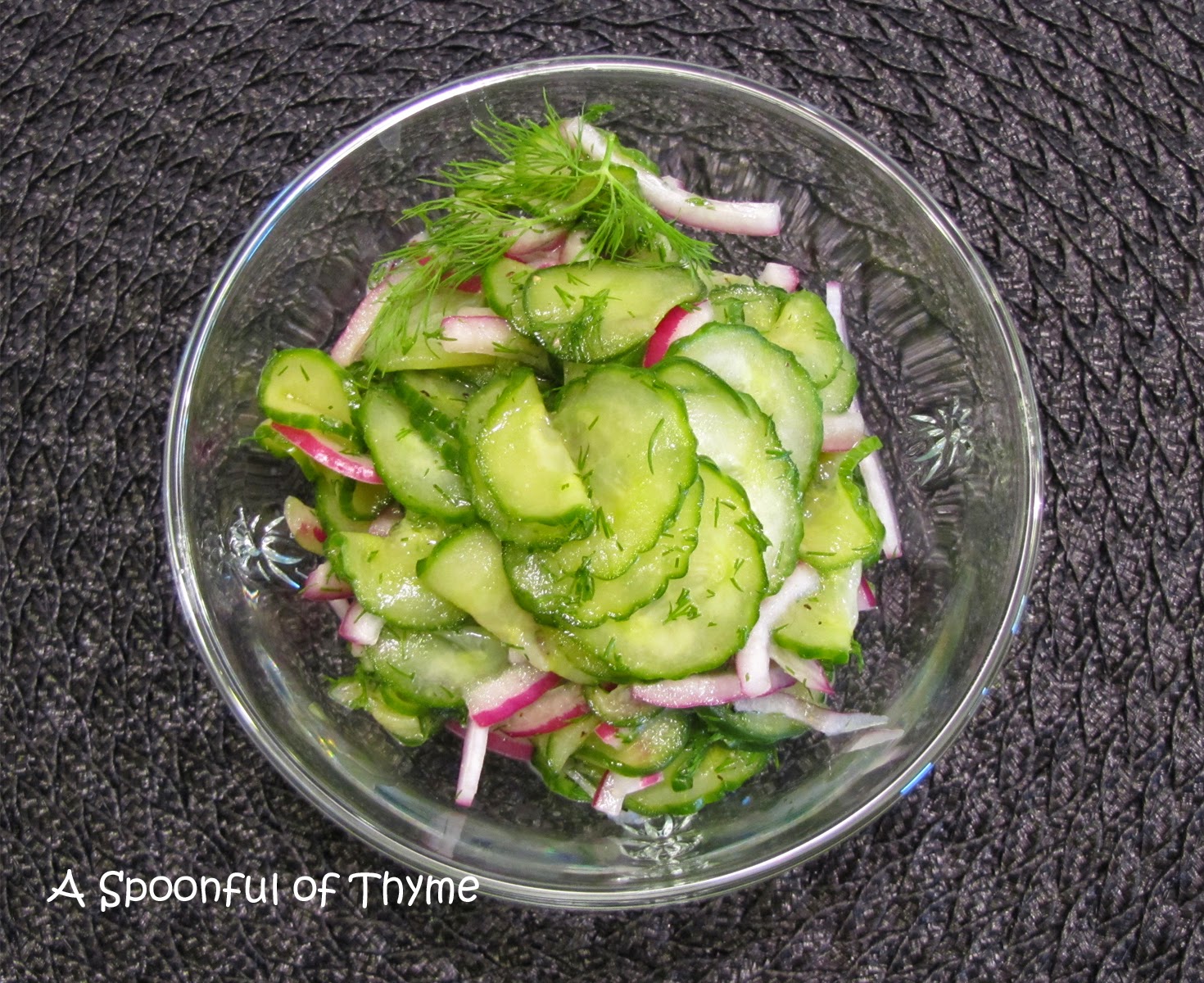 Who is Angela, you ask?  Angela is the author of the blog, Angela's Kitchen.  Yes, you are right, it is Secret Recipe Club time, once again!  Angela is a lady who has taken the bumps that life has dealt and made roses, daisies and rainbows!  Angela is one of the first dairy free and gluten free blogs in cyber-space!  She faced life's challenges head-on and has become quite a resource for folks who require this special diet.  Hop on over and take a look.  You won't be disappointed.

I had a difficult time selecting just one recipe to make....and since I am trying really hard to BE GOOD, I was headed toward salads.   I found three recipes that I wanted to make and so far, I have made two of them....today's recipe, Cucumber Salad, was a winner.

Angela makes her salad with rice vinegar.  Knowing that my childhood memories did not include rice vinegar, I set up a taste test.  I determined the proportions I would need of vinegar to sugar and mixed three dressings. One with rice vinegar, one with cider vinegar and one with white vinegar.  I decided that the cider vinegar best represented what I remember but it was a narrow difference between cider and white vinegar!  I am going to try white wine vinegar next...just because.

I also added some Dijon Mustard to the dressing and of course, dill is the traditional herb in Gurkensalat, so I knew I had to include it!

And...if you are interested in what the other salad was, check back later this week.  You will love it!!