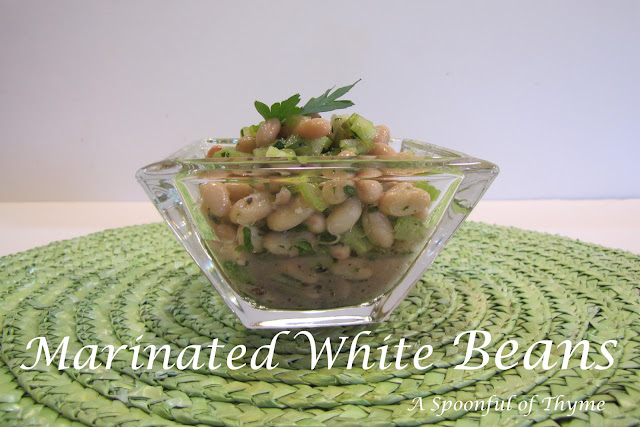 In the town where I live there is one dish that everybody knows...Maison Jaussaud's Marinated White Beans!   If you ever tasted them, then you probably tried to replicate the recipe.  Wow!  They were delicious.

Maison Jaussaud's was a French chateau-like restaurant that was open in the fifties and sixties. they served French cuisine, their waiters were dressed in tuxedos and they had headliner entertainment. Before Johnny Carson made it big, he was on-stage at Maison Jaussaud's.  Over the years, California governors and senators, as well as actors, Bob Hope, Bing Crosby and Charles Laughton were hosted at the restaurant.  What memories....I was so excited to have dinner there after the Winter Formal my senior year of high school.  One felt elegant going to such a "fancy restaurant"!  I know that we all played "our part"!

The appetizer that was served to all patrons consisted of a crystal boat-shaped dish filled with vegetables along with a dish of their marinated white beans and  wonderful soft French Bread.  There could have been other items but I don't recall....I could have made a meal on the beans!

There are many recipes floating around out there that are purported to be the Jaussaud's Marinated White Beans.  Most of the recipes have bell pepper in them...I don't recall that bell pepper was among the ingredients but what does a high school kid know...  Well, I know that I don't like the taste of bell pepper dominating my marinated white beans!!  So, this recipe does not have pepper.  It is a very simple, but tasty marinated white bean.

My youngest daughter discovered the recipe and asked if I would make it for her as she was cooking for a camping trip....sure, white beans, anytime!!  I asked about adding other ingredients and was told to "just make the recipe the way that it is written...but make sure that they have a taste."  Sounds like an oxymoron to me.  Yes, I adjusted the recipe...I had to add more vinegar.  It is the one ingredient that you cannot skimp on.  Since the recipe calls for equal parts of vinegar and oil, I just added 2 Tablespoons additional red wine vinegar....I would suggest adding vinegar by taste the first time you make them....

Pick over beans, rinse.  Place in a large pot and add water to about 2 inches about the beans.  Bring to a boil.  Let boil for 2 minutes, remove from heat and cover.  Let stand for an hour.  Test beans for doneness.  If the beans are not done, simmer for an additional hour.

In a small dish, add the garlic and vinegar.  Let it sit while you prepare the remaining ingredients.

In a large bowl, add beans, celery, parsley, garlic and vinegar.  Stir to combine.  Add the oil a little at a time, stopping once the salad is lightly coated.  Add a dash of red pepper flakes with salt and pepper to taste.

The beans get more flavorful the longer they marinate.  I make them early in the afternoon  for an evening meal. 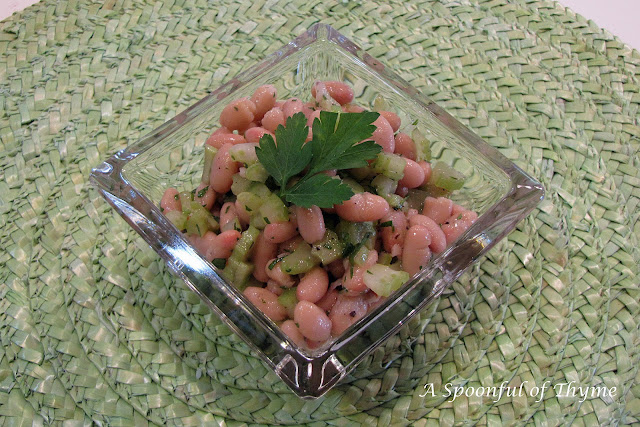 These were a special treat!  We loved them and I know they will be made again soon...