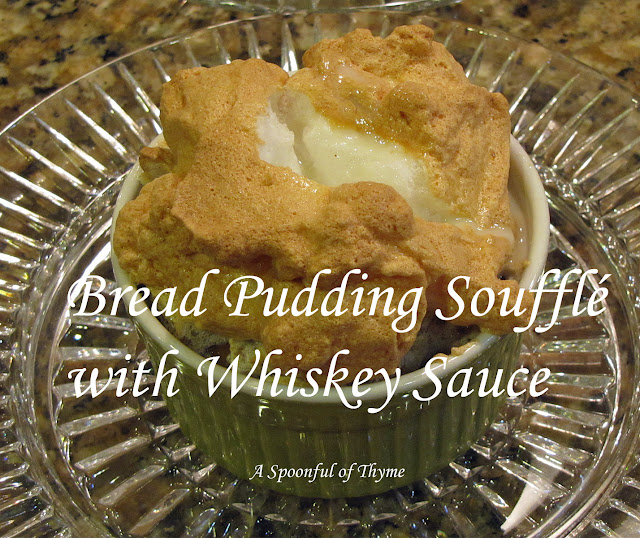 When I was searching for a dessert to accompany our Mardi Gras menu, I was immediately drawn to the Bread Pudding Soufflé with Whiskey Sauce recipe that I found in Lee Bailey's New Orleans Good Food and Glorious Houses.  He teamed up with Ella Brennan and created numerous menus with elegant foods set in fabulous New Orleans homes....what a tour....and what a dessert....intriguing...bread pudding and soufflé...an interesting combination but one worth exploring!

It requires three elements:  bread pudding, meringue, and sauce.   All three sound good to me!!

Mix the sugar, cinnamon, and nutmeg in a large bowl.  Beat in the egg and egg white, then stir in the half and half and the vanilla.  Add bread and raisins and stir.  Pour into prepared pan and bake until lightly browned and a toothpick comes out clean, about 45 minutes.  Cool.

Make the sauce:  Whisk together the cornstarch and water.  In a small saucepan over medium heat, bring cream to a boil.  Add cornstarch mixture, whisking vigorously.  Let mixture return to a boil.  Then remove from heat and stir in sugar and bourbon.  Allow to cool, then refrigerate.

In a large bowl, whip the egg whites until foamy.  Continue to whip, adding sugar gradually, until shiny and thick.

In a large bowl, break half the bread pudding into small bits, using a large spoon or your hands, (Reserve the remaining half of the bread pudding for another time.)  and gently stir in half the meringue.    Then fold in half of the remaining meringue, reserving the rest.  Spoon the mixture into the prepared cups and top each with a swirl of the reserved meringue.  Bake in a water bath until tops are golden, about 20 minutes.

To serve, warm the  Whiskey Sauce in a double boiler.  Poke down the tops of the soufflés and spoon in a bit of the sauce. 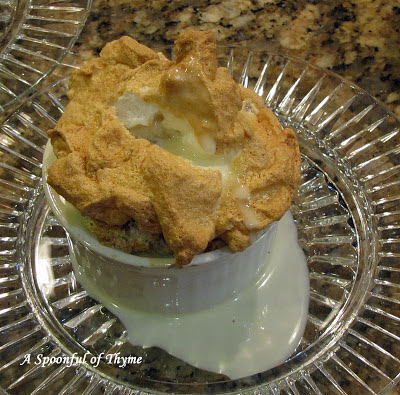 All I can say is....heavenly....so delicious....a perfect dessert for a special dinner!!