Potato Cheese (and a spot of ale) Soup! 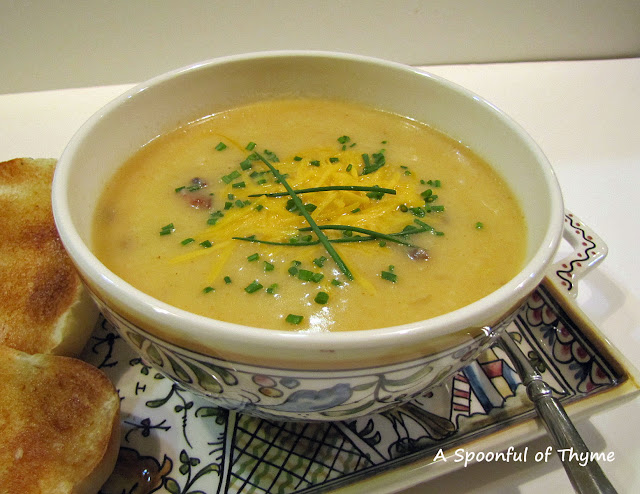 It has rained day and night for the last three days.  There has been over three inches at this point and that is sometimes our yearly total!  We live in the foothills so we haven't had to launch the kayak or build an ark.  Those living in the flatland are breaking out the sandbags and for the most part, staying home.  The streets look like rivers and in some places it is two feet high!  Compared to what happens to the folks who live in the midwest, this isn't really a flood...just very slow drains!

Soup sounded just right for a day like this and I had a very large bag of potatoes...so, Potato Cheese (and  a spot of ale) Soup!  To me, a spot of ale means a bottle or mug of ale. So, that is what I used.
The Kitchen Gnome said I shouldn't mess with an already good potato cheese soup recipe...he was a sport though and gave me the only ale in the frig.  It was a bottle of Blue Moon which is a wheat ale.


Potato Cheese (and a spot of ale) Soup

In a large saucepan, cook the bacon over moderate hear until crisp.  Remove the bacon and drain on paper towels.  Retain about 2 tablespoons of bacon fat.  If there isn't enough, add enough oil to equal the amount.  Reduce heat to low.

Add the onion and cook, stirring until translucent, about 5 minutes.  Add the garlic and saute for another couple of minutes.

Add the potatoes and brown them a little.  Then add the stock, beer, and water, and salt.  Bring to a boil.  Reduce the heat and simmer, covered, stirring occasionally, until the potatoes are tender, 15-20 minutes.

Remove half the soup from the pan and puree it in a food processor or blender.  Use a masher to mash some of the potatoes remaining in the pan.  Return the puree to the pan.  Over low heat, add the cheese and stir until melted.  Add the paprika and apple cider vinegar.  Stir until well combined.  At this point the bacon may be added to the mix or it may be reserved to use as a garnish with the chives.  (This time, I added mine to the pot!) Remove the pan from the heat.  Taste and adjust seasonings.

Serve the soup topped with the bacon and chives. 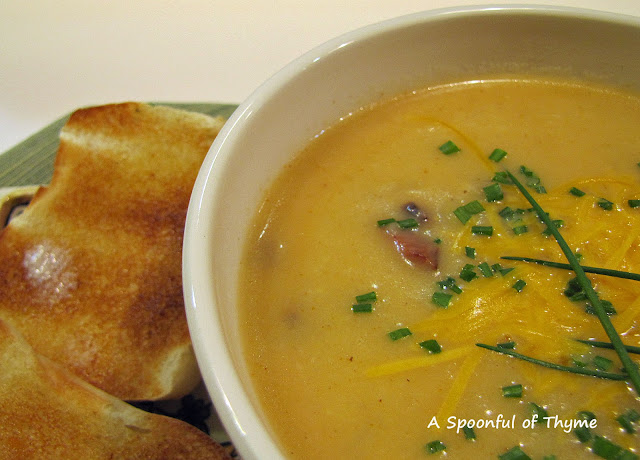 The soup was delicious and hit the spot on a cold, wet day!
Labels: Cheese Comfort Food Potato Soup