There are times when just "salad" gets old.  How many green salads can one eat?  It was time to mix it up a bit, switch it around, and think of something different.  Granted, wilted greens aren't unusual, but they take a few more steps than the regular green salad.  Was it worth it?  Totally!

I ran across this mixture while browsing through Jubilee, a cookbook by Toni Tipton-Martin.  It is a cookbook that I loved reading.  The history and recipes of African American cooks through the years...so interesting and a long overdue tribute to their culinary contributions. 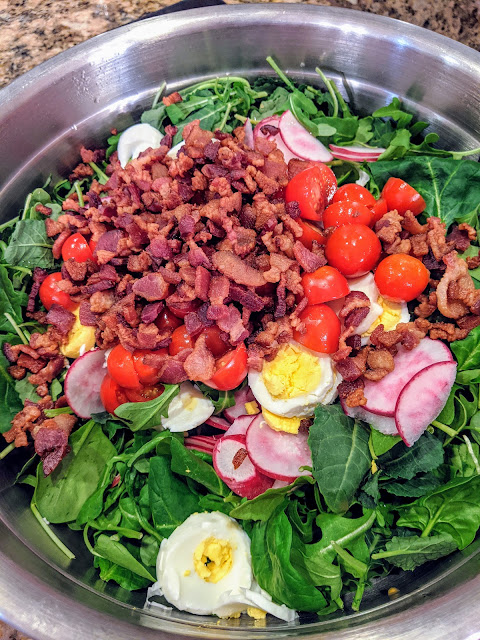 Wilted Mixed Greens with Bacon
adapted from Jubilee by Toni Tipton-Martin
2 bags mixed greens
4 radishes, thinly sliced
1/4-1/2 small red onion, thinly sliced
2 hard boiled eggs, sliced
1 cup grape tomatoes, cut into halves
8 slices bacon
2/3 cup cider vinegar
1 Tbsp sugar
2 tsp salt
1/4 tsp black pepper
1/3 cup crumbled blue cheese, optional
Toss together the first five ingredients, in a large bowl.
In a large skillet, cook the bacon over medium heat until crisp.  Leaving the rendered fat in the skillet, remove the bacon and set aside to drain and cool.  When cool, crumble the bacon.  Set aside.
Heat the bacon fat in the skillet over medium-high heat.  Stir in the vinegar, sugar, salt ,and pepper.  Allow the mixture to remain on the heat for a few minutes it will thicken slightly.  Pour the hot dressing over the greens and toss quickly to coat.  (All of the dressing may not be needed.  Adjust based on volume of salad.) Sprinkle the crumbled bacon and blue cheese (if using) over the salad.
PRINTABLE RECIPE 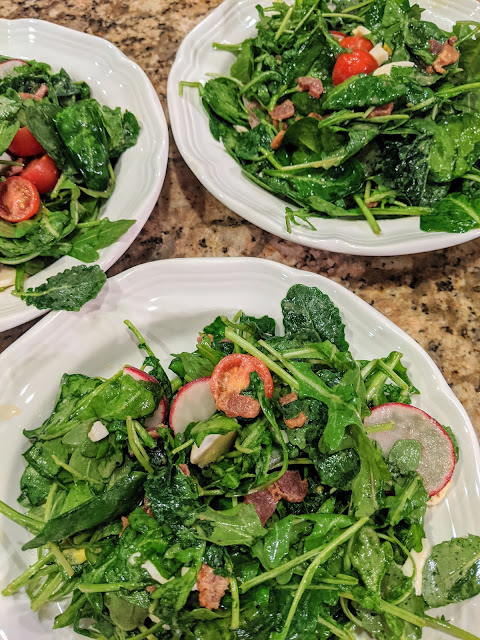