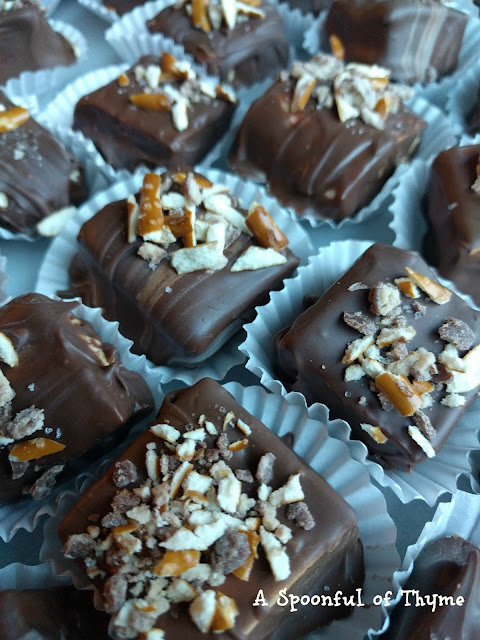 Chocolate and beer...a nice chocolatey stouty beer!    Doesn't that sound like a nice combination? You are right, it is amazing!  Making marshmallows sounded sticky to me.  I wasn't certain about working with it but on this adventure, I was the sidekick....so, no worries.

My SIL was the chef in charge.  He had been participating in a baking competition at work...yes, there are teams that find time to do something totally different from their jobs!  Anyway, he had won level one and was moving to level two.  These little chocolatey guys were certain to be a Level 2 winner!

Did I mention that there is a garnish?  Yep, a crushed pretzel garnish..and, that was the sidekick's role....crush pretzels.  Sprinkle when requested, and add a sprinkle of sea salt!

This is a recipe that takes time.  The beer should flatten overnight.  The marshmallows must cure in the refrigerator 10 to 12 hours or overnight.  Just a note so that you allow yourself the needed time. 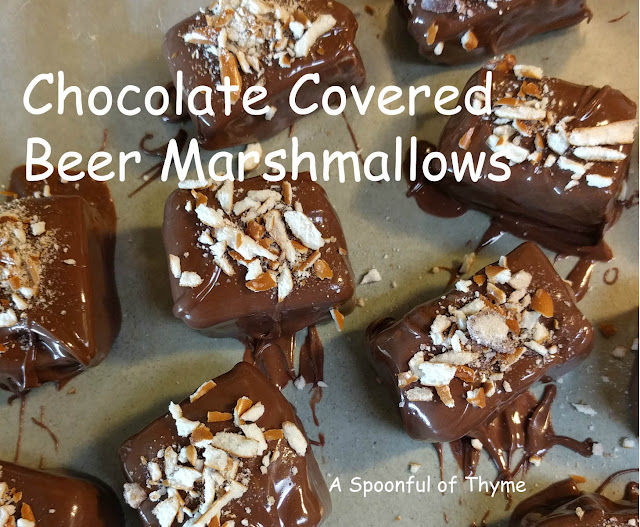 Yield: About 24 marshmallows, based on how you cut them

The best beginning is starting the night before.  Open the bottle of beer and let it sit overnight.  If you forgot...pour the beer into a bowl.  Whisk to release as much of the CO2 (carbon dioxide) as possible.

Preparing the Bloom
Sprinkle the gelatin in the bowl of a stand mixer.   Mix the flattened beer and vanilla together.  Pour the mixture over the gelatin.  Allow the mixture to stand for three to five minutes. Whisk until no lumps remain.

Preparing Sugar Syrup
Combine the flattened beer, corn syrup, sugar, and salt in a 4-quart saucepan or larger. (We opted for the larger pan to avoid the overflow of any unforeseen excessive bubbling!)  Attach a candy thermometer to the side.  Turn the heat to medium high.  Bring the sugar mixture to a boil.  As the syrup heats it will foam up to the top of the pan.  Keep watch!  When the mixture is between 225° F. and 230° F., let it bubble for another 5 minutes and then remove from the heat.  Ideally the syrup should reach 240° - 250° F, but you may have trouble getting an accurate reading due to the foam.  If your syrup starts to climb to 250° F., remove the pan from the heat.

With the mixer on low speed, carefully pour the hot syrup mixture down the side of the bowl into the gelatin bloom.  Turn the mixer to high and whip for 8-10 minutes, until it is very thick and looks like glossy meringue.  Pour the marshmallow into the baking pan or loaf pan.  Let it cure, uncovered, for 10-12 hours or overnight.

Marshmallows will keep in a covered container for several weeks.

NOTE:  This is a recipe that takes time.  The beer should flatten overnight.  The marshmallows must cure in the refrigerator 10 to 12 hours or overnight.  Just a note so that you allow yourself the needed time. 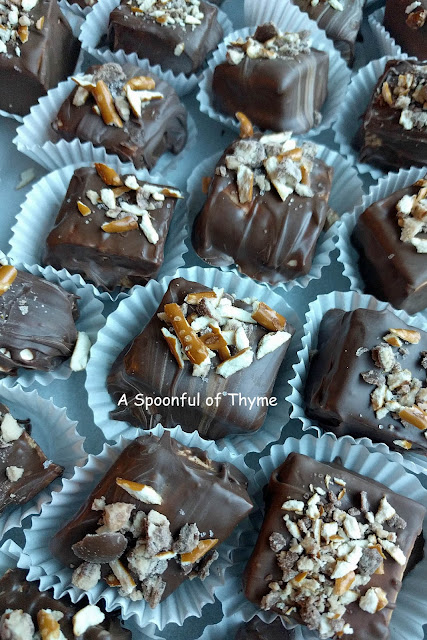 You will be happy to know that the marshmallows did win in the second level of competition.  Go Kevin!  In fact, he won level three and the final level, four!  Congratulations!  Sadly, I do not have pictures for the chef's entries in level three or four so I cannot share.... 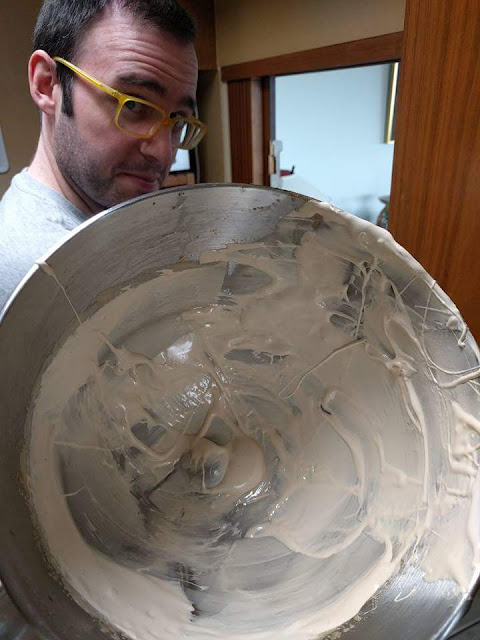 I enjoy cooking with my SIL.  He rocks!