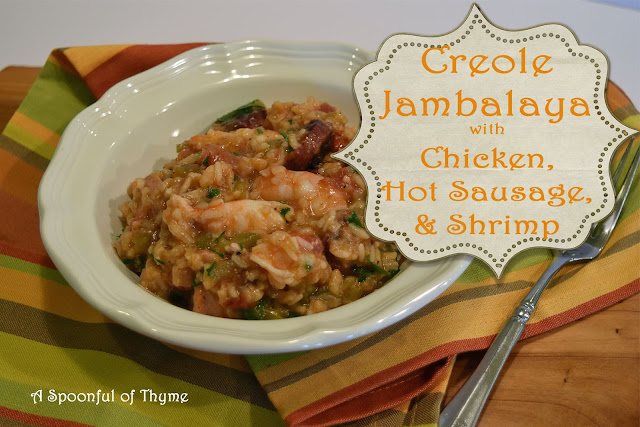 A few years ago, Terry received a small pocket-sized cookbook for Christmas entitled Recipes Every Man Should Know by Susan Russo and Brett Cohen.  As he was planning the meals for the guys' camping trip, he said he wanted to make the Jambalya that was in his cookbook.  I read through the recipe and saw that it was fairly easy and straight-forward.  The summary said it was gut-filling and they would need that for the adventures that they had planned.

The only thing we did differently was to use Louisiana Hot Sausage and skip the addition of a hot sauce at serving.  It was spicy-hot so if you prefer a more calm jambalaya I would suggest using an andouille or kielbasa sausage.


Creole Jambalaya
with Chicken, Hot Sausage and Shrimp
adapted from Recipes Every Man Should Know

In a heavy pot over medium-high heat, warm the olive oil.  Add the chicken and cook until browned, about 7 minutes.  Transfer to a bowl and set aside.

Add the sausage and good until browned, about 5 minutes.  Transfer to the bowl with the chicken and set aside.

Return the chicken and sausage to the pot.  Add the seasoning, Worcestershire sauce, rice, broth, and tomatoes.  Stir well to mix.  Bring the mixture to a boil.  Reduce the heat, cover and simmer until the rice is fully cooked and has absorbed most of the liquid, about 20 minutes.

Stir in the shrimp and cook until pink and opaque, about 5 to 7 minutes.  Stir in the parsley.  Season with salt and pepper.  Taste and adjust the seasoning as needed.

Serve in bowls with crusty bread.

This was a truly a "gut-filling" dish.  I am certain the guys had enough fuel to get them started on their first hike! 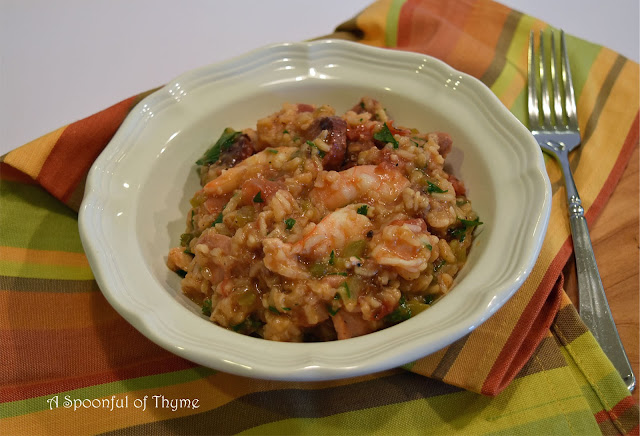