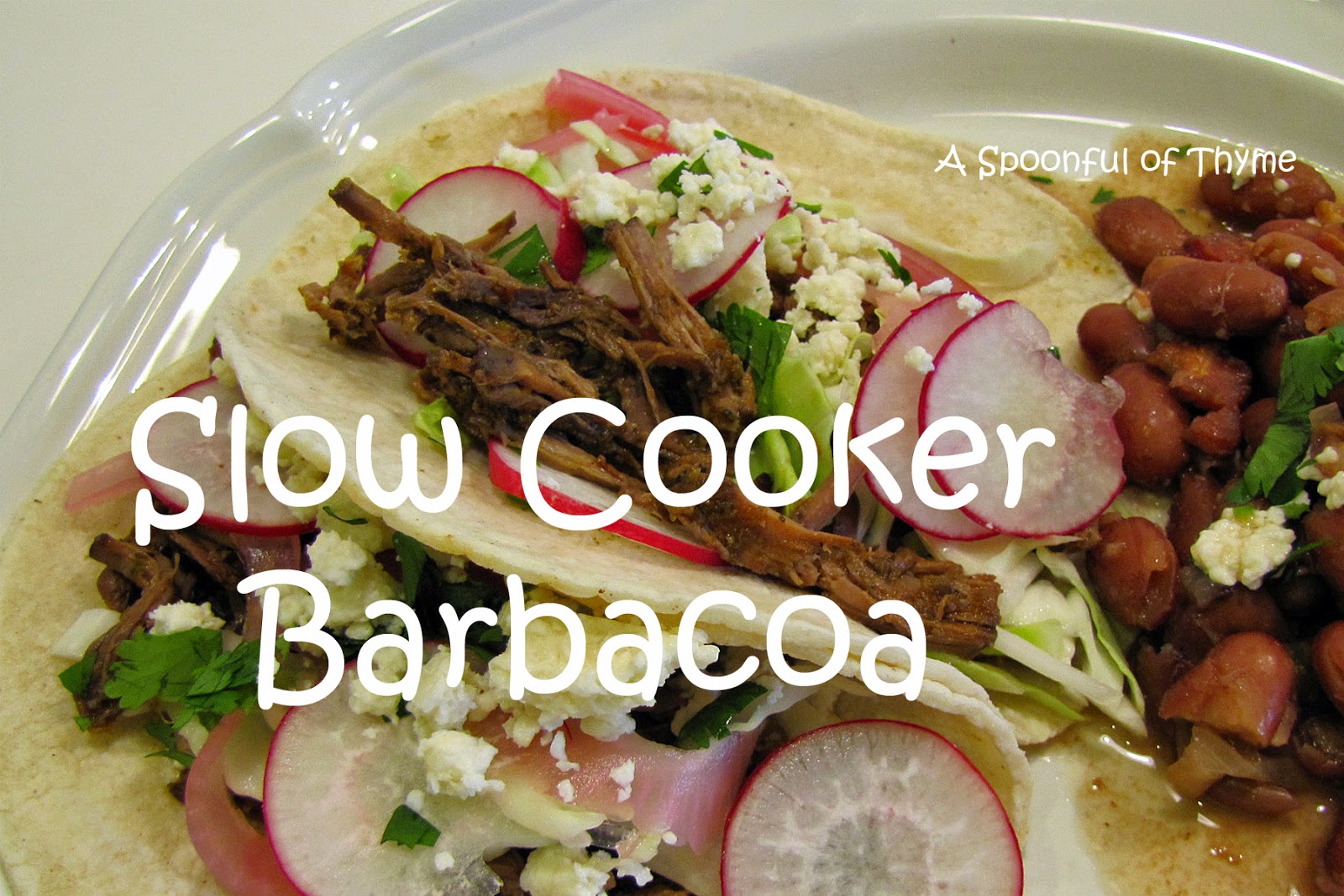 When my daughter said that we were having barbacoa for dinner I had no idea what to expect.  I had never heard of it.  I saw the slow cooker on the counter so I knew that it was an all-day affair....I knew that we had gone to the market late in the evening to get pork and would you believe, they were out?  Stores are not supposed to be out of pork...we had a plan...alas, it was dashed by all those folks in Seattle who also wanted pork!  That led us to the beef counter.  A nice beef roast would be fine....we were still having barbacoa.

What is barbacoa?  I was told that it is on the menu at Chipotle.  I rarely, rarely eat there so that still meant nothing to me....except I new it was Mexican cuisine.  As it bubbled and cooked I was constantly drawn to the kitchen by the wonderful aromas...braising beef, a simmering pot of beans, pickled onions....this was going to be delicious and it was!

When I got home, I knew that I was going to make it for Mr. T.   I really needed more information so I started researching and realized that there was no better source than Rick Bayless and I just happened to have a few of his cookbooks.  According to his cookbook, Mexico One Plate at a Time, barbacoa is a slow-cooked meat, pit style. The meat is wrapped in leaves and lowered into a pit dug in the ground, placed on heated rocks glowing from a bonfire.  The meat is sealed in the pit which becomes a smoky, steamy oven.  Hours later the pit is opened and the pit-cooked meat is removed with a bit of anticipation and ceremony.  That is really a simplistic description as in some styles of barbacoa, the actual process involves placing the meat on a grate over a cauldron of soup and then sealing the pit!  Cooking with steam....meat juices falling into the soup...wow...what a process....

The type of meat and the type of leaves vary by region....lamb, cow's head, goat, pork...leaves from agave, avocado or banana...  It is all about the process...steam-roasting the meat whereas, in the United States, pit cooking is more about the smoke.

So what does that have in common with what I did?  Meat, spicy sauce (soup), steam, braise for hours in a slow cooker....it is all good!

Prepare the roast:  Trim fat.  Cut the roast into large chunks.  Sprinkle all sides with salt and pepper.  Set aside.

Prepare the sauce:  In a food processor or blender combine the sauce ingredients.  Blend until smooth.  Set aside.

Heat 2 tablespoons of olive oil in a heavy bottom skillet or pot.  Sear all sides of the beef chunks. Do not crowd the meat as you want it nicely browned, not steamed...yet.  :-)  When browned, remove the pieces of meat to the slow cooker.

Pour the sauce over the meat.  Add the bay leaves.  Cook on high for 6 hours.

After five hours, use two forks to check the meat to see if it is shredding.  If so, remove it from the slow cooker and pull the meat apart, remove any pieces of fat.  Place the shredded beef back into the slow cooker.  Stir to cover the meat with the sauce.  Continue cooking for another hour on warm. 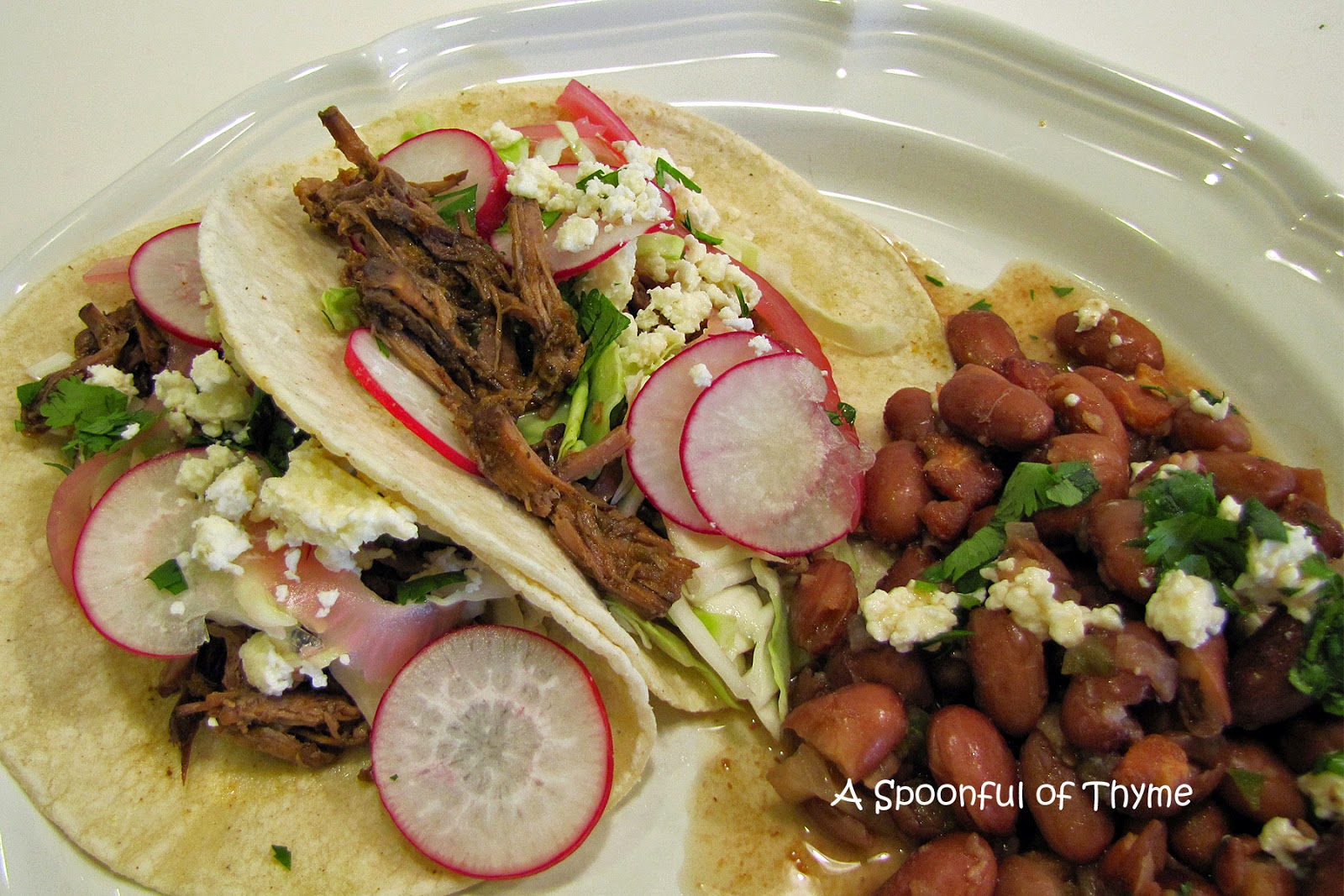 We enjoyed the Barbacoa served as tacos with pickled onions, shredded cabbage, thinly sliced radishes, cotija cheese and a sprinkling of cilantro.  The meal wouldn't have been complete without a pot of beans!  You can find the recipe for pickled onions, here.  The recipe for the Bacon-Simmered Pot Beans is here.

While we served the Barbacoa in tacos, it can easily become burritos!