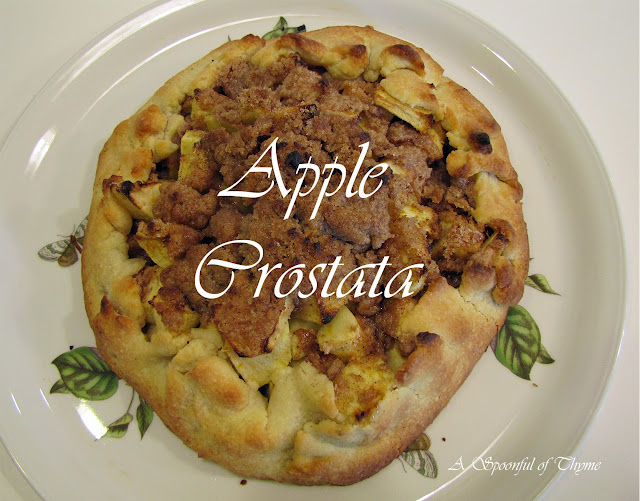 When I think of fall and apples, the next thing that comes to mind is cinnamon.  Was there ever a better marriage than apples and cinnamon?  At the moment, I think not....  As this is the time for the Behind the Curtain Dessert Challenge, hosted by Sheryl, The Lady Behind the Curtain; I have been eyeing numerous apple and cinnamon recipes.  I found so many that I probably won't be able to stop at just this one!

Apple Crostata was the dessert of choice.  We had company coming for dinner, so it seemed like the perfect way to address the challenge and to have something extra yummy to share.  The only problem I had was that it was consumed before I thought of taking more pictures...rest assured that it did not last long! 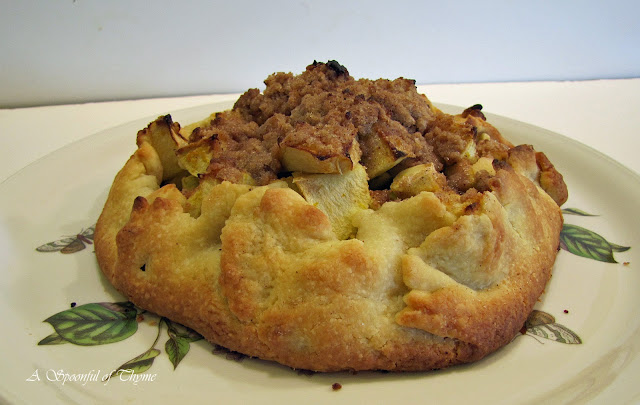 For the pastry, place the flour, sugar, and salt in the bowl of a food processor fitted with a steel lade. Pulse a few times to combine. Add the butter and toss quickly (and carefully!) with your fingers to coat each cube of butter with the flour. Pulse 12 to 15 times, or until the butter is the size of peas. With the motor running, add the ice water all at once through the feed tube. Keep hitting the pulse button to combine, stopping the machine just before the dough comes together. Turn the dough out onto a well-floured board, form into 2 flat disks. Wrap the disks in plastic and refrigerate for at least an hour. If you only need one dough, freeze the second disk.

Preheat the oven to 450 °F. Line a sheet pan with parchment paper.

Roll the pastry into an 11-inch circle on a lightly floured surface. Transfer it to the sheet pan.

For the filling, peel, quarter and core the apples.  Cut each quarter into chunks.  Toss the chunks with the orange zest.  Cover the tart dough with the apple chunks, leaving a 1 1/2-inch border.


Combine the flour, sugar, salt, cinnamon, nutmeg, and all spice in the bowl of a food processor fitted with a steel blade. Add the butter and pulse until the mixture is crumbly. Pour into a bowl and rub it with your fingers until it starts to hold together. Sprinkle evenly over the fruit. Gently fold the border of the pastry over the fruit, pleating it to make an edge.


Bake the crostata for 20 to 25 minutes, until the crust is golden and the fruit is tender. Let the crostata cool for 5 minutes, then use 2 large spatulas to transfer it to a wire rack. Serve warm or at room temperature. 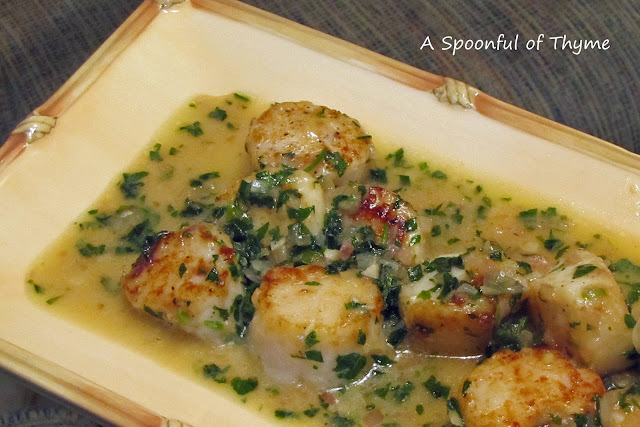