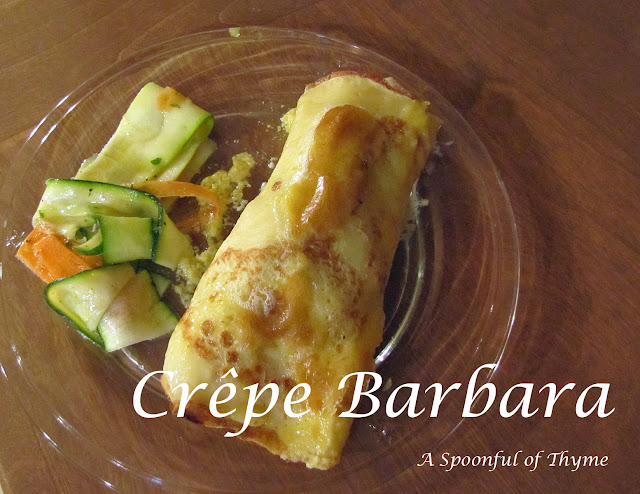 When I was working and had to travel, I always picked up a cookbook specific to the area I had visited.  On a few occasions, I traveled to New Orleans...so, since it was February, Mardi Gra time and I was preparing the menu for out gourmet group....I pulled out Breakfast at Brennan's and Dinner, Too by Pip, Jimmy and Ted Brennan, Proprietors.

While we always have appetizers to accompany our wine or cocktails prior to dinner, we sometimes enjoy the addition of a more formal appetizer...one that is served at the table.

These seafood crêpes with a Hollandaise sauce were delicious!  The chef even prepared some pickled zucchini and carrot strips as a garnish....so tasty!!

Melt the butter over low heat in a large sauté pan, then add the crabmeat and 2 tablespoons water.  Season the crabmeat with salt and pepper and cook until heated through, about 5 minutes.  Fold in the shrimp and briefly warm the mixture.

Place the crêpes on oven proof plates.  Fill the center of each crêpe with about 1/4 cup crabmeat and 2 shrimp.  Roll the crêpes and top with 1/4 cup Hollandaise and 1 tablespoon Parmesan cheese.  Broil the crêpes until the cheese melts, about 1 to 2 minutes, and serve immediately.

In a medium bowl, beat the eggs with the milk.  Add the flour and whisk until smooth.  Strain the batter to remove any lumps.

Preheat a 5 inch crêpe pan or skillet, and brush it lightly with melted butter.  Pour about 2 tablespoons batter into the pan and tilt the pan to spread the batter evenly over the bottom of the pan.  Cook the crêpe over medium heat until golden brown, about 30 seconds, then turn the crêpe and brown the other side.

Repeat the procedure with the remaining batter, making about 16 crêpes in all.  The crêpes can be sealed in plastic wrap and frozen for several weeks.

Melt the butter in a medium saucepan, skim and discard the milk solids from the top of the butter.  Hold the clarified butter over very low heat while preparing the egg yolks.

Place the egg yolks, vinegar, cayenne, and salt in a large stainless steel bowl and whisk briefly.  Fill a saucepan or Dutch oven large enough to accommodate the bowl with about 1 inch of water.  Heat the water to just below the boiling point.  Set the bowl in the pan over the water; do not let the water touch the bottom of the bowl.  Whisk the egg yolk mixture until slightly thickened, then drizzle the clarified butter into the yolks, whisking constantly.  If the bottom of the bowl becomes hotter than warm to the touch, remove the bowl from the pan of water for a few seconds and let cool.   When all of the butter is incorporated and the sauce is thick, beat in the water.

Serve the Hollandaise immediately or keep in a warm place at room temperature until use.

I am sharing today at On the Menu Monday hosted by Yvonne at Stone Gable.