Mr. T came home with a 2.5 pound bag of fresh baby spinach last week!  We really like spinach but I must admit it has been a challenge to find multiple ways of serving spinach!

Needing a new recipe led me to my new cookbook, Pasta Revolution from America's Test Kitchen.   There were a number of recipes that caught my eye but I kept going back to Baked Penne with Spinach, Artichokes and Chicken!  I am happy that I did!  A casserole with lots of flavor and made without using a can of soup!  It is like turning the popular spinach and artichoke dip into casserole!!


I did make a few adjustments based upon what was in the pantry.  I switched out the penne for rotini and sadly, I didn't have the frozen artichokes required in the recipe so I used a can of artichoke hearts.

In a large Dutch oven bring 4 quarts of water to a boil.  Add pasta and 1 tablespoon salt and cook, stirring often, until nearly al dente.  Drain pasta and set aside.

In another large pot, add butter, and melt over medium heat.  Add onion and 1/4 teaspoon salt and cook until softened, about 5 minutes.  Stir in garlic and cook until fragrant, about 30 seconds.  Stir in flour and cook for 1 minute.  Slowly whisk in broth and cream until smooth and bring to simmer.  Stir in artichokes and spinach and continue to simmer until vegetables are heated through, about 1 minute.

Stir in 1 1/2 cups mozzarella and 1/2 cup Parmesan until melted.  Off heat, stir in lemon juice and season with salt and pepper to taste.  fold in cooked pasta and shredded chicken, breaking up any clumps of pasta.  Pour into 13 X 9-inch baking dish and sprinkle with remaining 1 cup mozzarella and remaining 1/4 cup Parmesan.  Bake until bubbling around edges and cheese is spotty brown, 12 to 15 minutes.  Let cool for 10 to 15 minutes and serve. 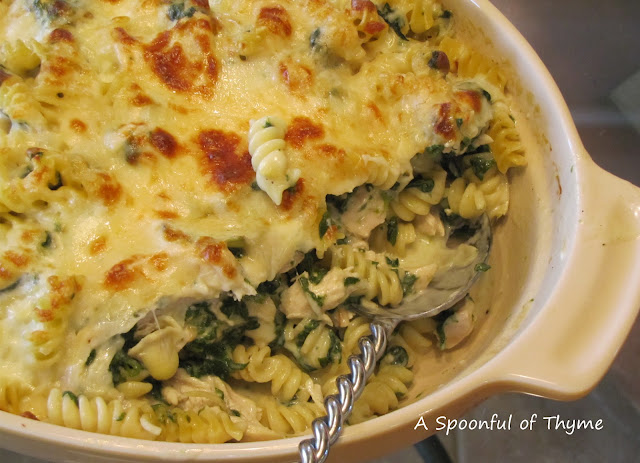 When I saw the amount of spinach that Mr. T brought home I was a bit over-whelmed but I am so glad that he brought it home.  If he hadn't, I wouldn't have found this delicious recipe!!

Since I have been on a quest for ways to prepare spinach, earlier in the week, we had one of my favorites...Spinach Salad with Snappy Dressing.  It is a nice variation from wilted spinach and the snappy dressing is a perfect match.

I also made a Spinach Chicken Salad which will be posted later this week.

I am participating in On the Menu Monday hosted by Yvonne at Stone Gable!  Take a look at all of the yummy dishes!!
Labels: Casserole Chicken Main dish pasta Spinach