What to do with the lone bottle of Guinness sitting in the refrigerator? 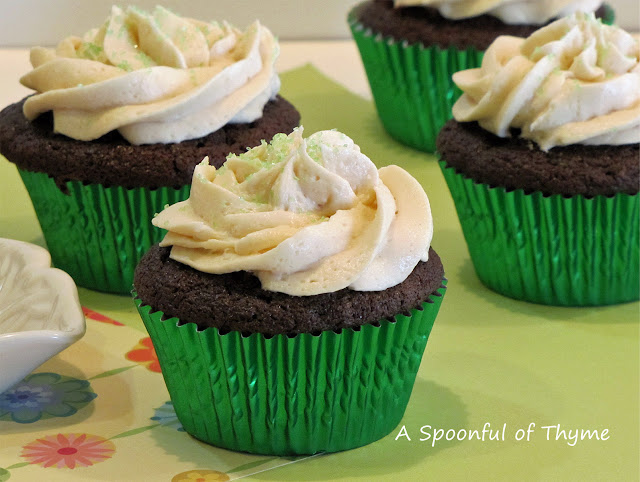 Why, make cupcakes, of course!

Let's see, cupcakes...beer...that doesn't really seem like a match but I was feeling adventurous and after thinking about it, I was really looking forward to making these cupcakes.  It was my niece's idea, really.  She was commenting about what she might make to get rid of the Guinness in her refrigerator...she thought the recipe looked great and I must admit, I did too.  I was lucky that I had a lone bottle available!

The Guinness deepens the flavor of the chocolate, the ganache filling is fabulous and with Bailey's Irish Cream smeared all over the top....oh, my.

Bailey's Irish Cream Frosting
3 to 4 cups confectioners sugar
1 stick (1/2 cup or 4 ounces) unsalted butter, at room temperature
3 to 4 Tbsp Bailey's (or milk, half and half or heavy cream)

In a heavy saucepan over medium heat, bring 1 cup stout  and 1 cup butter to a simmer.  Add cocoa powder and whisk until mixture is smooth.  Cool slightly.

Whisk flour, sugar, baking soda, and 3/4 tsp salt in a large bowl to blend.  With an electric mixer, beat eggs and sour cream in another bowl, to blend.  Add stout-chocolate mixture to the egg mixture and beat just to combine.  Add flour mixture and beat briefly on slow speed.  Using a rubber spatula, fold the batter until completely combined.

Divide the batter among the cupcake liners, filling them 2/3 to 3/4 full.  Bake them until the tester inserted into the center comes out clean, rotating them once front to back if your oven bakes unevenly, about 17-20 minutes.

Remove the cupcakes from the pan and cool completely on a rack.

Make the filling:
Chop the chocolate and transfer it to a heat-proof bowl.  Heat the cream until simmering and pour it over the chocolate.  Let it sit for one minute and then stir until smooth.  (If the chocolate is not sufficiently melted, it may returned to a double-boiler to gently melt what remains; or it may be heated in the microwave for 15 to 20 seconds, watch closely!)  Add the butter and whiskey (if you are using it) and stir until combined.

Fill the cupcakes:
Let the ganache cool until thick but still soft enough to be piped.  Meanwhile, using a 1-inch cookie cutter, cut eh centers out of the cooled cupcakes.  You want to go down about half way into the cupcake.  (I marked the top of the cake by twisting the widest pastry tip and then I used a grapefruit spoon to carefully remove the center.)  Put the ganache into a piping bag with a wide tip and fill the holes to the top.  (Judge the depth of the hole in relationship to the amount of ganache that you have.)

Make the frosting:
Whip the butter in the bowl of the electric mixer,  for several minutes.  You want to get it very light and fluffy.  Slowly add the powdered sugar, a few tablespoons at a time.  (Adding the sugar slowly will  make the frosting less grainy and it will thicken more quickly.)  When the frosting is thick enough to spread, drizzle in the Bailey's (or milk) and whip it until combined.  (Again, judge the amount of frosting you need in relationship to the number of cupcakes.  I had to make an additional half to have enough frosting.)

Frost the cupcakes and enjoy! 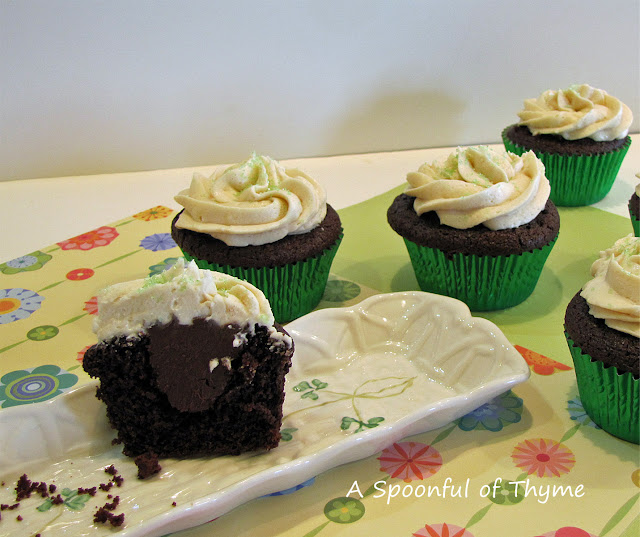 My niece found a keeper recipe!  She got it from The Mess Pot who got it from The Smitten Kitten.  I will make these again.  They were very rich and delicious.....thank you, Jessica!

I am sharing today at Full Plate Thursday hosted by Miz Helen's Country Cottage and Foodie Friday, hosted by Michael at Designs by Gollum and Sweets for a Saturday hosted by Lisa at Sweet as Sugar Cookies.